What Would You Do If You Were Not Afraid? [BLOG] 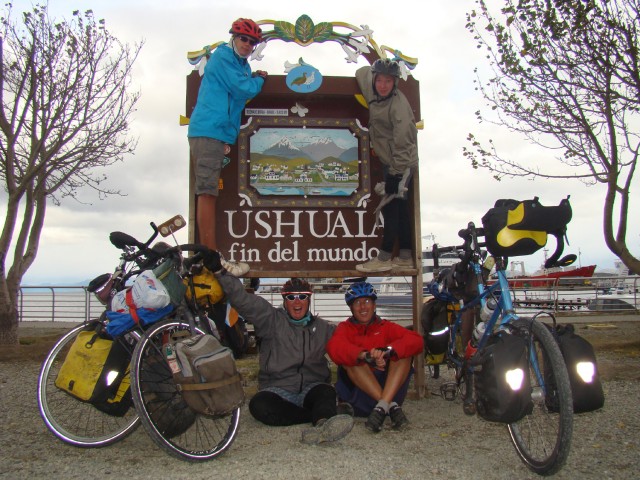 What would you do if you were not afraid?

Please take a moment right now to answer that question.

If you weren’t afraid of the unknown, running out of money, or not having enough time, what would you do? There is nothing to hold you back except you.

What’s your dream? What is that dream you’ve been keeping stashed in the deepest recesses of your brain, afraid to let out? What is it that you’d really like to do?

I challenge you to do it. Make a commitment, then do it. You are limited only by your own imagination. Let it fly.

Who am I and why am I telling you to step out of your comfort zone? I am “Mom” to Family on Bikes, a family of four who recently rode our bicycles from Alaska to Argentina. Yes, I said bicycles. With children. It was magic.

Our journey was about as far out of my comfort zone as possible and, I’ll admit, I was a bit reluctant to do it. When my husband first brought up the idea I thought he was crazy. “We are parents, dear husband,” I said. “With children. You know—those little human beings running around the house? Yeah—them. Parents with children don’t take off on bicycles. It’s just . . . I dunno . . . it’s not what parents do!”

And yet, as time marched on and that hubster of mine kept talking about quitting his job and getting a bicycle, I figured I needed to take him seriously. And the most amazing thing happened.

I started wondering if maybe, just maybe, it wasn’t him who was the crazy one—but me. I got up early every morning and dropped my precious children off at daycare, then went to my classroom where I spent my best hours with other people’s kids. After school I picked up my boys, took them to soccer practice, fixed a quick dinner, threw the laundry in the washing machine, washed dishes, cleaned the house, and then I collapsed into bed, exhausted.

I didn’t question that life because it was what parents do. It was, I suppose you could say, destiny. It was what I was supposed to do.

And I thought my husband was crazy?

A few days later we headed to the store to buy bicycles and we’ve never looked back. We’ve now spent a total of four years pedaling 27,000 miles (map of the journey below). Our sons are nearly 14 years old now and we’ve created more memories together than many families do in a lifetime.

As I’ve cycled the highways and byways of the Americas with my husband and children, I’ve often thought of the words of a dear friend of mine. Shortly after her son committed suicide I knocked on her door to express my sorrow.

She gave me the biggest hug I’ve ever had and, through her tears and grief and torment, she uttered some of the wisest words I’ve heard.

“Take advantage of every moment. Don’t put it off. Tomorrow may never come.”

I challenge you to reach way back inside and drag that dream of yours out and live it. Don’t put it off. Take advantage of every moment you have. Tomorrow may never come.

* The photo above was taken when we arrived in Ushuaia on March 21, 2011 on our 17,300 mile adventure from Alaska. Ushuaia is the capital city of Tierra del Fuego Province, Argentina. It is commonly regarded as the southernmost city in the world.