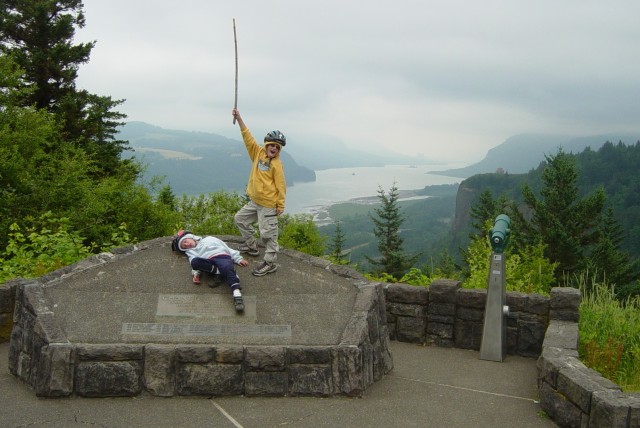 Kids come up with priceless tidbits of wisdom every once in a while. Even mine.

My sons, the world record holders as the youngest people to cycle the length of the Americas, are frequently interviewed about their journey. A while back, they were asked what advice they would give to parents who want to take a cycling trip with their kids. Daryl’s advice blew me away:

“Do it,” he said. “Your kids don’t need to have a chest full of toys and their own bed. All they need is a bed to sleep in, food to eat, and imagination.”

I love that. Especially the imagination part.

We, like most American families, had a houseful of toys once upon a time. The boys had buckets of blocks, Legos, and K’Nex. They had toy cars and trains and hot rods. They had water guns and Nerf guns. My boys had a PlayStation and a stack of games.

They had toys. I mean—they had TOYS!

And then we piled on our bikes and headed out to see the world. Each child was given a small handlebar bag to stash his toys in. If it didn’t fit, he had to leave it behind.

The boys spent hours planning which toys they would take with them. They took their handlebar bags to their toybox and practiced stuffing them with various toys, and cooperated to make maximum use of their limited space.

In the end, they packed a few plastic aliens and a wiggly snake.

The first day of our journey, those aliens and their pet snake made their way out of the handlebar bags during every break we took. As soon as we hopped off the bikes, the boys’ hands were digging in their bags to pull out the toys. Their aliens fought battles and conquered new lands while we sat on the side of the road, and then they headed back home to sleep while we pedaled.

By the second day, the aliens still came out, but sticks and pinecones became their spaceships and the distant planets the aliens controlled.

Within a few days, the aliens had been forgotten. The boys’ playthings had fast become solely of the natural variety: rocks, sticks, leaves, and pinecones.

My son had bucket-loads of imagination. Tree branches became Ninja swords, rocks became baseballs and discarded Coke bottles magically turned into bowling pins. Their imagination soared as they discovered the world about them.

Now that we’re back home, the boys have rediscovered plastic toys, but they’re more particular about what they choose. Before we traveled they wanted every toy they laid eyes on, now they make their purchases wisely. If it’s a toy that will be used for a few minutes before being discarded, they’ll pass. If it’s something that allows them to use their imagination to create new and fantastical wonderlands—they’re all over it.

All four of us now understand how little we truly need to be happy. All we really need is a place to sleep, food to eat, and our imaginations.

What do you need?

* The photo above was taken of the boys playing along the Colombia River in Oregon.