You Can Begin to Change Things Now [BLOG] 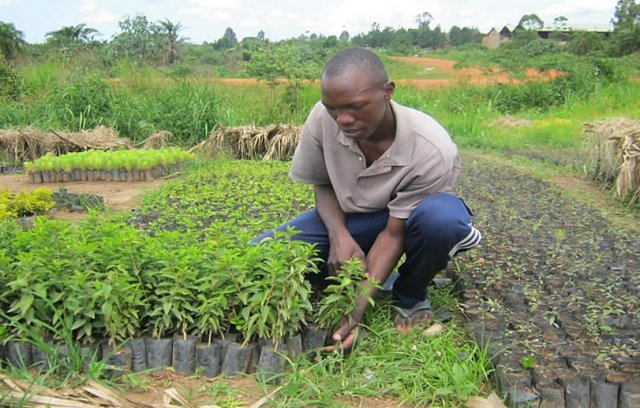 “You Can Begin To Change Things Now”

If you dream of making a difference, but think you lack the time and resources to do it, I’m here to tell you that it’s more possible than you think.

My name is Moses Sanga and I grew up in one of the poorest villages in the world.

I put on my first pair of shoes at age thirteen, and saw a television for the first time at age fifteen. Despite this, I managed to become the first graduate in my entire clan. After years of studying abroad, I traveled back home to Western Uganda, and what I found there shocked me.

A terrible drought had wiped out my mother’s crops and dried up the community water source. Kids now spent precious school hours walking, and waiting in line to retrieve water for their families from a government borehole eight kilometers away from the village. Upon further investigation, I discovered that almost all of the trees had been cut down to clear land for agriculture and for use as fuelwood, which in turn has caused drastic climate change. Because over eighty percent of Sub-Saharan Africans depend on fuelwood, Africa is losing four million hectares (nearly ten million acres) of forest each year.

At this rate, Africa will have no forests left by 2052.

“It’s impossible to find firewood in the neighborhood because all the trees are gone,” my sister lamented. To buy fuel for the family home, she had to walk ten kilometers to the nearest trading centre.

I soon hatched a dream to find a solution to the deforestation. I would quit my job to start a business, and call upon my former training in organic charcoal making. I don’t think I slept a wink the entire week before handing in my resignation, because I was plagued with late-night concerns: What if I fail? How will I pay the bills and support my family?

At the same time I worried, If I don’t do this, who will?

And so I left my job and started Eco-fuel Africa Limited. With only $500 we managed to launch a pilot plant and invented a unique energy-efficient method of making organic charcoal from agricultural waste that is suitable for large-scale production. In November 2010, our first batch of organic charcoal landed on the market.

The Uganda government has since started to recognize and fund our project, even promising that it will pass a law banning the cutting down of trees for charcoal if our production meets demand.

Our goal is to provide at least 40 million citizens with affordable clean energy by 2020. We also work with organizations to plant trees in Sub-Saharan Africa, and I even wrote a book to motivate people worldwide to start planting trees to help counter climate change.

Even the most underfunded and ambitious dream can unfold in amazing ways.

Instead of blaming and waiting for the government to take action, ordinary citizens like you and me need to realize that we are fully capable of making things happen. No matter how busy or helpless you feel, you can begin to change things now.

Moses Sanga is obsessed with stopping deforestation and combating climate change. As Founder and Chief Executive Officer of Eco-fuel Africa Limited, he’s the inventor of a technology that will give forty million Africans clean energy by 2020. Moses also aims to plant at least a quarter of a billion trees.