From Champagne to Carrot Juice 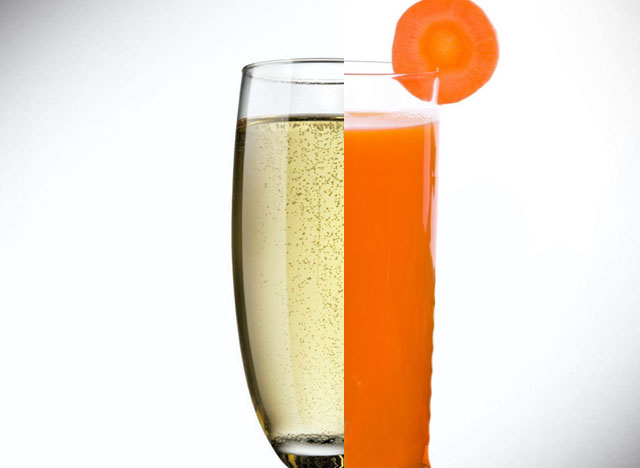 If someone had told me, on April 23, 2008 that my future would be filled with hourly juicing, multiple daily coffee enemas, meditation, and a diet of simple organic vegan food, I would have laughed so hard I would have spat champagne in their face. I was twenty-two years old—as if I was ever going to trade my party-girl lifestyle for that! But by April 24, I was willing to agree to anything as long as it promised to save my life.

Almost four years ago I was diagnosed with a rare and aggressive type of cancer called epithelioid sarcoma, in my left hand, arm, and armpit. It flipped my world upside-down. I was working at my dream job as the online editor for a teen magazine, partying three nights a week (and that was just weeknights) and living on a diet that consisted mostly of champagne, canapés and late-night Lean Cuisines. All I knew about cancer was that Kylie Minogue had survived it. But this glimmer of hope was ripped away from me when I was told that my cancer would not respond to chemotherapy or radiation, and that my only chance of prolonging my life would be to have my left arm amputated at the shoulder.

I was eager to do whatever my doctors told me to do, but signing the papers to allow them to cut my arm off was by far my lowest ebb. Thankfully, at the final hour, I was given another option. I had an extremely high dose of chemo pumped into just my arm—if that amount went into my body, I would have been dead in an instant.

Following scans showed I was clear of cancer, but in 2009—not even a year after going into remission—the cancer was back. This time I was told my only option was amputation, but that this would just be biding me time. Deciding this was not good enough, I took matters into my own hands. I refused their offers and began searching for natural, alternative cancer treatments. The way I saw it, I had two choices: I could let them chase the disease around my body until there was nothing left of me to cut, zap, or poison; or I could take responsibility for my illness and bring my body to optimum health so that it can heal itself. For me it was an easy decision.

This all led me to Gerson Therapy, a strict and rigorous regime of hourly juicing, round-the-clock coffee enemas, a basic vegan diet, and a program of cancer-fighting supplements. I went to Mexico to stay at the Gerson clinic for three weeks, and then came home to continue the therapy with the help of my family. For the past two years I have dedicated every waking hour to saving my own life. To thriving against the face of adversity, and carving a new reality for myself based on the wisdom and inspiration I’ve gathered along the way.

Cancer is not a gift. I certainly wouldn’t give it to a friend. However, it is a powerful catalyst for change. There’s no better agenda than the threat of death to push you towards living your best life. Before cancer became part of my daily vocabulary, my life lacked meaning. It was fun, and I thought I was living to my full potential, but it wasn’t until all of the superficial trimmings were forced to take a back seat that I realized what I was really capable of creating for myself.

This is certainly not the reality I would have chosen back when I was motivated by free drinks and clawing my way up the magazine career ladder, but I wouldn’t change a bit of it. It has not been easy. The past four years have called for more strength and soul searching than I knew I was capable of. For every challenging change there has been a blessed transformation, and for every breakdown there has been a breakthrough.

I have learned so much over the past four years, but perhaps the greatest piece of wisdom is that we have control of the state of our health, our happiness, and our lives. If I had accepted my fate and took my doctor’s word as gospel, I would now be an amputee living in fear of my cancer reappearing elsewhere in my body. Instead I chose to take responsibility for my health and became an empowered participant in my treatment. I now live every day knowing that as long as I treat my body and mind with the respect they deserve, it will reward me with vibrant health, endless opportunities, and daily miracles.

Jess Ainscough is a writer, holistic health coach, and the creator of the health and wellness website, The Wellness Warrior. Via her e-books, daily blog posts, and videos, Jess’s goal is to empower people to take control of their health and show that the quality of our lives is directly linked to how we treat our body and mind.