There Are Good People Out There 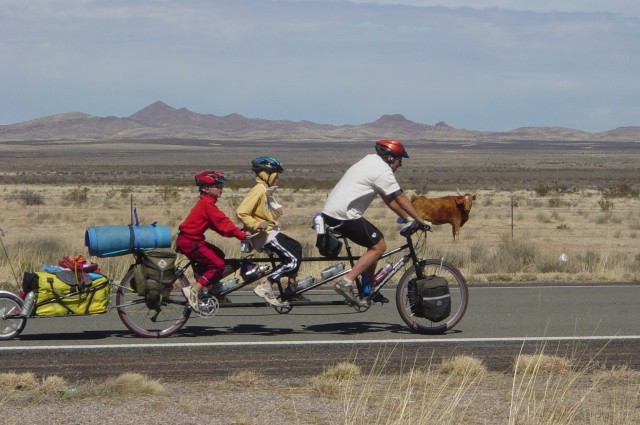 Know what drives me crazy? The idea that people are bad.

The media is filled with stories of “bad” people—people to be feared. By watching the nightly news one would assume that our world is populated by people who would rather hurt than help us; who would go to great lengths to avoid lending a helping hand.

My husband and I, along with our twin sons, have spent a total of four years cycling the Americas. We’ve pedaled 27,000 miles in all, including a three-year journey from Alaska to Argentina that spanned fifteen countries.

Wonder how many “bad” people we encountered in three years, 27,000 miles, and fifteen countries? I could count them on one hand.

How many good people did we meet? Hundreds. Maybe thousands. In every country we passed through. There was never any shortage of people willing to help us out or add magic to our journey.

As I sit here at my computer writing this, visions of kind, generous people swarm through my mind. There was Mary in Portland, Oregon who handed us the keys to her house and said, “Go on in and make yourselves at home. I’ll be back from a meeting in a couple hours.” And Mary didn’t even know us. And then there was Bob in San Luis Obispo, California who drove up alongside us as we slowly made our way to the town campground. “Want to spend the night at my house tonight?” he asked. Or Bill in a small town in Texas who rode up on his bicycle as we ate crackers and cheese in the city park and said, “What would you say to a hot meal and soft bed to sleep in tonight?”

I could tell you stories of arriving at a campground 5000 feet higher than we were in the morning with more water than we left with—every single car that passed by stopped to give us water. Or orange juice. Or chocolate bars.

And then there was the time it was pouring rain and we missed our ferry to Manhattan. We were stranded in the middle of a massive urban sprawl and the skies were a nasty gray with no end in sight and there was absolutely no place to pitch our tent. It was one of those moments when I looked around at the massive puddles filling the roads and wondered why I ever thought it was a good idea to take my precious boys out on bikes. And that’s when a kind, generous woman stepped up to the plate and said, “Why don’t you spend the night at my house tonight?”

And then there was the day we cycled through a valley in Arkansas that was filled with the sweet smell of burning pine. It seemed like most houses in that rural part of Arkansas had a fire going, and for good reason. It was unseasonably cold and the strong wind created a brutal wind chill. The four of us bundled up with just about every scrap of clothing we owned and looked like Michelin men riding down the highway. After a few days of balmy eighty degree weather where we sweated all day, the cold was a bitter shock to our systems. Not only was it a shock to us, it was a shock to the people of Arkansas—it tied an all-time record set back in 1938 for being so cold. And we were headed north directly into frigid headwinds.

We were hunkered down, pedaling along the Arkansan highway when a car pulled up ahead of us and a woman jumped out. “I found you!” she exclaimed. “I came out looking for you guys—I’m so glad I found you.”

Kathryn welcomed us to Arkadelphia, the “Peanut Brittle Capital of the World” and pulled out a bag of the sweet peanut-y concoction. “I heard you might be coming my way so I came out to see if I could find you.”

We were confused. “You came out looking for us,” I asked, incredulous. “Huh?”

“My cousin met you a couple days ago,” she told us. “He sent me your picture and said you might be coming my way—he really had no idea where you were headed. But he asked me to go out and see if I could find you. It’s going to freeze tonight, and he didn’t want the kids out in the freezing cold. Would you come stay at my house tonight?”

Fifteen miles later we pulled up to Kathryn’s house and peeled off our layers of clothes. She had a big pot of spaghetti and a smile as big as a freight train waiting for us, and we felt at home immediately.

Everywhere we went—from Alaska to Argentina—people welcomed us to their lives and made us feel welcome. We saw the other side of America—the side not portrayed in the nightly news.

The Dalai Lama once said that the preponderance of bad people in the news indicates their relative rarity in society. If we ever get to the point where bad people are the norm, it’ll be the few good ones in the news.

Our experience shows the truth of the Dalai Lama’s words.

* The photo above was taken along the Mexico/New Mexico border.