When Someone Almost Died in My Hands 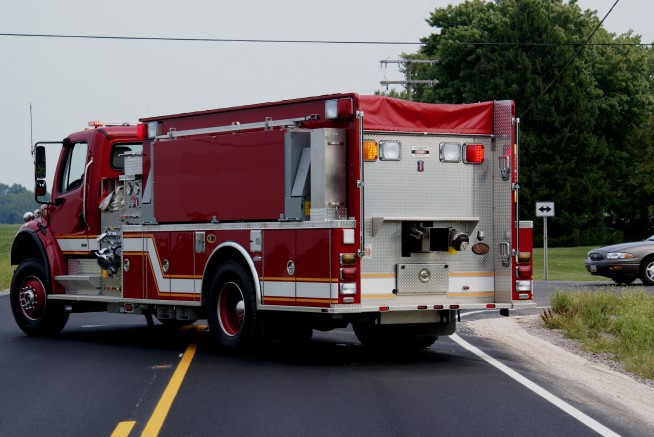 My husband, Matt, pulled the car over on the side of the freeway in Oakland beside the unconscious man with blood gushing from his face, his teeth knocked out, a massive hematoma on his forehead, his knee broken in half, and his ankle stripped of skin and askew. I noticed that he was still breathing, but his chest was rising and falling the way people with severe head trauma breathe—not normally. He still had a pulse, but it was fast and thready.

The woman standing next to him, who had pulled off with me said, “I saw it. He just fell—or jumped—off that freeway overpass and landed right here.”

The cops were there, the paramedics had yet to arrive. Someone threw me a pair of blue latex gloves and I knelt down on the bloody pavement in my white lace dress.

With no neck brace to stabilize his neck, no back brace to lift him onto, no IV to bolus him with saline, no suction catheter to suck out the blood that was choking him, no endotracheal tube with which to intubate him, no oxygen to help his labored breathing, no blood transfusion to replace what was pouring out of him, and no pain medication, I felt helpless. As it turns out, a doctor without her tools has little to offer other than love. So that’s what I did.

Two off-duty paramedics without any more equipment than I pulled over and ran to help me. Together, we held the man’s head steady. We wiped his bloody face with baby wipes. We checked his vitals as best we could. We did what we could to clear his airway. We removed the broken teeth from his mouth. We applied pressure to his bleeding wounds. We prepared to give CPR if he stopped breathing or lost his pulse.

Then we just held him and prayed. I closed my eyes and wondered if the man’s spirit could hear me, if he might be in some in-between place, deciding whether to check out or stay in this world, the way Anita Moorjani described her in-between experience over breakfast at the Hay House conference and in her NY Times bestselling book Dying To Be Me.

Just in case he could hear me, I told him to be at peace, that if he had jumped, to forgive himself, and if he decided to stay, that there is always hope. In case he couldn’t hear me, I prayed that whatever was in the highest good for all beings be so.

Because the off-duty paramedics know more about dealing with a trauma patient than an OB/GYN does, I let them take over and instead just sat on the ground beside him and held my hand over his chest. Sometimes we forget when people are sick or hurt that what they most need is to feel connected, to be loved, to be touched. With no equipment to get into high-tech rescue mode, all I had was low-tech love.

I’ll never forget a patient I cared for when I was a medical student. When I rounded on him, he took my hand and said, “I’ve been here for three weeks and nobody has touched me with anything but a needle or a stethoscope. Will you please hold my hand?” And because it was a slow day, I spent an hour with him like that.

My hand was on the man’s chest, feeling his heart beat, when I heard sirens and saw the blaze of ambulance lights. By this point, the cops had closed the freeway and a circle of bystanders were watching. The ambulance sped to a stop and a team of paramedics with all the right gear sprang to action. The neck brace went on, they rolled him onto the blue back brace, someone suctioned his nose and mouth, another cut off his clothes to reveal the full gore of his injuries, a third placed an oxygen mask over his face, while one pressed on the hematoma on his forehead.

The woman who had seen it happen said, “Yeah, I think that’s where he landed.”

How Do You Explain It to a Six-year-old?

Because I was in the way with my hand on his chest, I stepped aside. Feeling shaken and unsteady, I returned to my car, where I realized that my husband and six-year-old were watching the whole thing. Matt said he had been talking about it with Siena and answering her questions. When I asked him why he hadn’t protected her from this bloody scene, he said, “I thought it was important she see what it is her Mommy does.”

When I asked her how she was doing, she said, “Don’t worry Mama. Whatever God wants to happen will happen.”

I figured she had more answers than me, so we drove away in silence.

Dealing With The Trauma

We had been on our way to my business partner and friend Amy Ahler’s house. When we arrived late and I explained what had happened, Amy said, “Honey, what do you need to do to process this? Cry?”

But I couldn’t. I felt numb. I realized this was an old pattern, one I had learned in medical school and residency and eight years of medical practice. You buck up. You do what it takes. You steel yourself. You never let ‘em see you cry for so long that when it’s finally safe to do so, you feel nothing.

Not until hours later did I feel a rush of sadness, grief, anxiety, fear, and loss rush over me. I searched the news to find out what happened, but I couldn’t find anything. Finally giving myself permission to feel what I felt, I started crying. The floodgates unleashed.

The Illusion of Control

Part of what I felt was unbearably helpless. I did nothing medically to help this guy. With all the knowledge and experience I have, without my equipment, I feel useless. I wonder sometimes if this is why we doctors go to medical school, to reduce the number of times we feel completely helpless in the face of tragedy, to earn the illusion of control in an uncontrollable world, to convince ourselves that people won’t die on our watch, not if we have anything to do with it.

And then a man falls from the sky and splats on the pavement, and you suddenly realize it’s all a bunch of bullshit.

I hope there were a bunch of skilled doctors at the local hospital trying to save this guy’s life. I hope he survived, if that’s what’s in the highest good, and if not, I hope he died peacefully. In the end, all I could do was love this stranger and wish him well on his journey. And in the end, I have to forgive myself and realize that that alone is enough.

I am not God. I am not a superhero. I am just a doctor who doesn’t travel with medical equipment in my car, but who always stops at accidents if there’s no paramedic there. And that’s the best I can do.

It makes me realize that perhaps we use our technology as a crutch. If I had had my equipment, I would have hustled into action. I might have done more good, but would I really have? Is it possible that my healing touch, loving prayers, and appreciation for the human whose life might be on the way out did more good than anything the ER doctors did with their CT scanners and blood transfusions and drugs and ventilators?

I don’t know. Maybe not. Maybe an unconscious man has no awareness of the fact that someone was there, holding space for his spiritual journey, touching his bloody skin. But what if he does?

Trying desperately to let go of my savior complex,

Lissa Rankin, MD: Founder of OwningPink.com, author of Mind Over Medicine: Scientific Proof You Can Heal Yourself (Hay House, 2013), TEDx speaker, and health care revolutionary. Join her newsletter list for free guidance on healing yourself, and check her out on Twitter and Facebook.