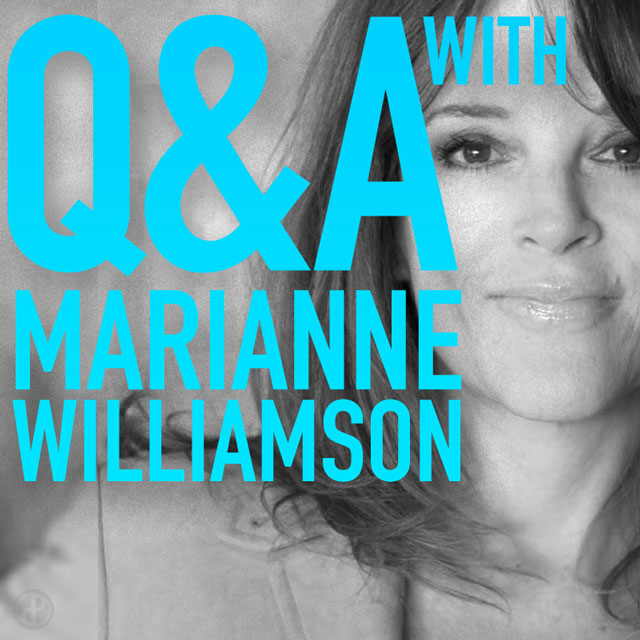 I often speak and write about my love for Marianne Williamson, who has been offering up incredible wisdom and guidance for decades. One of the qualities I most respect and admire in Marianne is her passionate commitment to spiritual activism. Not only is she changing the world, but she’s also awakening us to the power of service.

I was fortunate to speak with Marianne recently about her activist work, and it’s my hope that her words inspire you to explore how you can be of service.

Gabrielle Bernstein: At what point in your career as a spiritual leader did you commit to speaking up about social and political change? What prompted you to do so?

Marianne Williamson: In my first book, A Return to Love, I wrote about things in the outer world that need to change—how we need to ameliorate deep poverty, heal the earth, end war. For me, it isn’t about politics, per se; it’s about our willingness to address human suffering. Starting Project Angel Food, a meals-on-wheels program for home-bound people with HIV/AIDS in Los Angeles County, was action within the non-profit sector. Starting the Department of Peace Campaign was action within the political sector. But what’s the difference, really? Such categories are just human constructs.

The point is to act compassionately and address suffering, wherever and however we can.

GB: In your book The Healing of America, you write about “holistic politics.” Can you explain what this means?

MW: When we began to embrace the holistic paradigm in healing, an entire world of integrative medicine opened. We no longer looked to Western allopathic medicine as the be all and end all of medical healing. Trying to suppress or eradicate symptoms on the physical level can be extremely important, but there’s more to healing than that; dealing with psychological, emotional, and spiritual issues involved in treating sickness is equally important. Those issues are causal elements in what creates a sickness to begin with, and dealing with them has a proven beneficial affect on the immune system. Is your doctor important if you’re sick? Yes. But so are your therapist, your spiritual counselor, and so forth. That’s why we call it an “integrative” approach to healing.

What is happening in politics today is a similar process to what happened in the medical world a few decades ago: we’re realizing that there’s more to healing than just addressing symptoms. Our primary paradigm when it comes to dealing with political and social dis-ease is allopathic: pass a law, lock someone up, engage in warfare. And the state of the world today makes it clear that such allopathic measures have not exactly brought peace to all.

The United States incarcerates more of its people than any nation in the world and any nation in history. Our military budget is almost twice that of all other nations combined. At twenty-three point one percent, our child poverty rate is second among the thirty-five developed nations of the world only to Romania! And 17,000 children on earth die of starvation every single day. There’s a lot more to those statistics than a simple “To Do” list can fix. We need to understand and dismantle the psychological, emotional, and spiritual dysfunctions that led to such things.

I was at a conference where someone mentioned a psychological study being done on those living in deep poverty (remember: a billion people in this world live on a dollar and twenty-five cents or less a day). I think the psychological study that needs to be done is on the psyche of a relatively prosperous Western civilization that allows such conditions to exist! Make no mistake, such horrors didn’t just come out of nowhere, and the fact that they still exist is the product of pathological complacency and fear.

GB: Why do you feel it’s so important for spiritually minded women to run for office?

MW: Two things. First, I think that people on a spiritual path—personal growth, recovery, whatever—are the last people who should be sitting out of the great social and political contests of our day. Why? Because they’re adept at change; they know that the mechanics of the heart and mind are the drivers of true transformation. Now, if you know what makes one person’s life change, then you know what makes a nation change, because a nation is simply a large group of individuals. We keep trying to change the world by simply moving around the furniture. We can see that this isn’t working, and people in the consciousness movement have some clues as to why.

Second, on the federal level, sixteen point eight percent of our Congress people are women. On the state level, it’s twenty-three point six percent. Do you think our legislative priorities would be what they are today were those legislative bodies anywhere near gender equal? Would the “war on women” exist as it does now? Would child poverty—or poverty, period—be given so little attention? I like to think not. If more women wielded political power in America—real, electoral power—then we could seriously help turn this ship around before it hits the proverbial iceberg. But we can’t wield that power until we claim it internally. And that’s where we are now—working our way toward truly claiming our power.

Making money more important than your own children is a pathological way for an individual to run their affairs, and it’s a pathological way for a society to run its affairs. The children of today are the workers, creators, and potential capitalists of tomorrow. Taking care of them today is the best way to take care of our economy long-term. Perhaps if more women joined the conversation, we would begin to speak real truth to power. Who else is going to mention that the economic emperor has no clothes?

GB: Can you speak to the emotional and psychological issues that keep women from expressing our full power?

MW: Often in life, our external circumstances change before we’re ready to truly embody the change. We often lag behind, emotionally and psychologically. While Susan B. Anthony and Elizabeth Cady Stanton just assumed that once women got the vote we would start participating on all levels of government, they didn’t foresee how difficult it would be for women to quite figure out how to do that.

And there are a lot of understandable reasons too, not the least of which—today more than ever—is that the entire political system is contrary to everything a feminine heart stands for. It lacks tenderness. It lacks poetry. It doesn’t nurture. It doesn’t love. And without those things, a woman’s soul is bereft.

Yet, look where that leaves us if we simply shudder and look away. Talk about being co-opted by a patriarchal system; it means we will have gone from men telling us condescendingly to not bother our pretty little heads about these things to not bothering our pretty little heads without even being told not to! What a travesty of everything that the suffragettes, who worked so hard and suffered so much on our behalf, stood for.

This will be an act of magnificent social artistry, and it’s possible now. I feel something in the air.

GB: I had the privilege watching Leymah Gebowee speak live. Leymah shared her story of how she led a women’s peace movement, which ended the second Liberian civil war in 2003. After sharing her story, she looked at the audience of American women and asked us what we were doing. With great concern for our country, she called us out and empowered us to take action. I’ve heard you reference the women of Liberia. You’ve said, “If they can do it, what are we doing?” Can you speak to what we can learn from our Liberian sisters?

MW: That we should be ashamed of ourselves. I mean that sincerely. Healthy shame, but shame nonetheless. We’ve really got to get going.

GB: On November 10–12, 2012, in Los Angeles, you’re hosting an incredible event called Sister Giant. Tell us what your intention is for this event.

MW: My hope and intention is that Sister Giant will be an incubator for the emergence of that new field of political possibility, entailing a new conversation about America and a serious sense of sisterhood. It will go over everything from psychological and emotional issues, to a spiritual perspective on politics, to actually training women how to run for office. I want to be a cheerleader for women who have never even considered running for office or being involved in a campaign but who, in the quietness of their hearts, might think, “Why not me?”

Martin Luther King, Jr. said that the desegregation of the American South was the political externalization of the goal of the Civil Rights Movement but that the ultimate goal was the establishment of the beloved community. He said it was time to inject a new dimension of love into the veins of human civilization. He wasn’t called a New Age nutcase or considered an intellectual lightweight for saying such things, and neither should we.

I don’t think making love the new bottom line is naïve; I believe that thinking we can survive the next hundred years doing anything less is naïve.

And I also believe that, at this point, I’m not the only one willing say so.

When love is our guiding light, we can break through barriers to be of loving service to the world. Gaining the courage and confidence to stand up for what you believe in is not always easy, but it’s fully within your reach. How can you infuse your work with the spirit of service and activism?

Featured in the New York Times Sunday Styles section as “a new role model,” motivational speaker, life coach, and author Gabrielle Bernstein is making her mark. Expanding the lexicon for the next generation of spiritual seekers, Gabrielle is the #1 bestselling author of the book, Add More ~ing to Your Life, A hip Guide to Happiness. In September 2011 Gabrielle launched her second book, Spirit Junkie, A Radical Road to Self-Love and Miracles. In 2008 she launched her social networking site HerFuture.com for young women to find mentors.