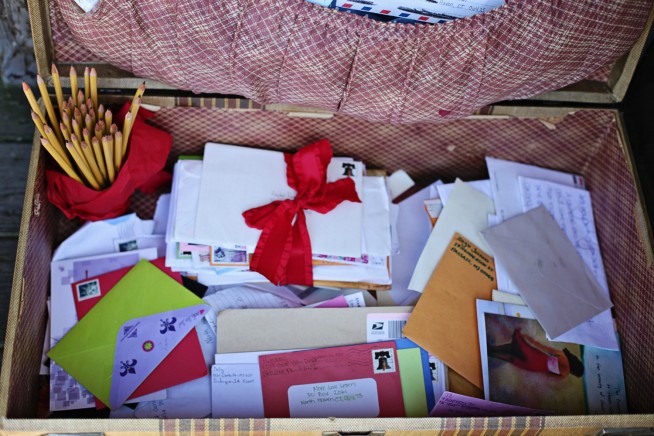 I began leaving love letters all over New York City for strangers to find nearly two years ago.

Though the idea sounds romantic, it was really a way to forget about my own feelings of sadness and loneliness for a while and focus on others in the big city who may have been feeling as let down as me. Every morning since that first love letter, I’ve pinned my cursive to writing and mailing love letters to people all over the world, packed with words that hopefully will help, heal, and hold them during a tough time.

With every stroke of the pen and sealing of the envelope, I’ve gathered life lessons that I know will never leave me no matter where my letters go.

We’re braver than we give ourselves credit.

I used to think bravery always meant being strong, never shedding tears, being the one who could hold it all together even when everything seemed to be falling apart. We learn that from the very beginning—how to save face, how to rely on ourselves, how to always be stronger but never (ever) weaker.

I received a letter request the other morning from a young woman in Israel. She felt ashamed, a bit cowardly and selfish, to be asking for a love letter for herself. Me? I thought it was the bravest act I’ve ever encountered.

It takes courage and strength to ask a stranger to write you a love letter, to admit you don’t know the words to tell yourself to make things better. Courage is being willing to crumble sometimes, to bring someone else in, to ask for help, to admit that you are only human and actually do need others to grow stronger.

We’re more alike than we are different.

I’ve never actually liked the statement “walk a mile in someone else’s shoes.” It seems nearly impossible, and I’m learning more and more with life that it isn’t always necessary.

Most of the time, our stories are clearly different even though we carry the same kinds of feelings—sadness, loneliness, jealousy, hurt, happiness, and hope. We can relate better than we ever expect if only we open ourselves up to it. We don’t need to shoulder the same struggle as someone else to show that person compassion or to be a bright spot in his day. We just need to care.

There’s a fear: we won’t say the right thing. We’ll make matters worse. We better just say nothing at all because we really cannot even imagine what that person is going through.

Even if we cannot seem to walk that mile in someone else’s shoes, we are still capable of standing beside them to be a supporter until the day they learn to smile again.

Even in writing the first 400 love letters, I never thought I actually made a difference in the world. I couldn’t believe that I was significant or that it mattered I was here.

Little did I realize—I was making a difference in the lives around me, not just letter by letter but small action by small action. Showing presence to another person. Answering the phone instead of texting. Holding the door open. Putting my words out into the world. These small things often seem too tiny to make a difference, but ripple effects come from a single action. Impact only needs one person to start touching dozens and dozens of lives.

Just yesterday, a young man in Australia tweeted that he had just left a love letter at his university. He sent me a picture. Not even twenty-four hours later, a woman named Ellen found that love letter and sent me back an email saying she had been dealing with feelings of doubt and sadness, and so the letter she found was the best thing she could read to make it better.

Sometimes it takes something as small as leaving a letter, doing a favor, or giving advice to create a ripple effect.

Sometimes a ripple effect is waiting for you; you simply have to start.

Hannah Brencher is a writer, speaker, and creator pinning her passion to projects that bring the human touch back into the digital age. After spending a year writing and mailing over 400 love letters to strangers across the world, Hannah launched The World Needs More Love Letters in August 2011—a global organization fueled by volunteer “letter writers,” now in fifty states and forty-seven countries. She’s been featured in the Wall Street Journal, Washington Post, Oprah, Glamour, the White House Blog, and is currently a global finalist for the TED2013 Global Talent Search (watch the TED Talk). You can also connect with her on Facebook and Twitter.