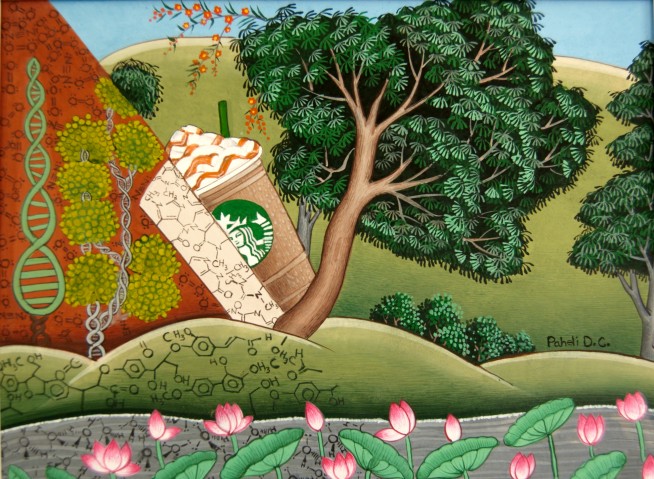 To my great relief, Mr. Verma turned out to be a soft-spoken, polite, older man who practiced miniature art in his modest middle-class dwelling. I had been appropriately apprehensive about what I was going to find once we landed in Jaipur to learn miniature art under an artist we had never met.

My responsibility was to be a middle person, organizer, and Hindi translator during the two-week training under Mr. Verma, arranged by a friend of my family, for my seventeen-year-old daughter who loves the miniature style of painting. My friend knew about Mr. Verma as a retired professor of traditional Indian art, who had acquired honors and awards in the Indian miniatures from Rajasthan. However, my friend did not know him personally, and I was not confident about the casual arrangements made with Mr. Verma to accommodate our tight two-week schedule.

The only thing I felt confident about was my brief email correspondence with the Canadian artist Cole who had trained under Mr. Verma. Cole had given him high points and had told me to compensate him well, because he would not ask for it.

I took it as a possible sign of relief from the vigilance I typically need to exercise during my yearly visits back home for not being exploited for my “dollar” value.

I am very familiar with the perils of the new economically emerging India in which many people seem to want to make a quick buck, especially when someone with a foreign bank account is involved.

As time went by, all my fears were not only proven wrong, but I was in awe of Mr. Verma’s genuine dedication to the development of miniature art into a formidable force, with no trace of flamboyance. Sticking to the traditional Indian Guru system, we never talked about how much monetary compensation he expected. I came up with the amount based on the time he set aside for us, still nearly not as high as any artist teacher in the U.S., but what I considered fair. When I asked around, people thought it was too high, too much by local standards. Yet, I decided to stick to our plan, especially because he had given us such good service. I wanted to make sure that we gave him his time’s worth.

At the end of the last class, we said our goodbyes, and I respectfully handed him the envelope. He counted the money, and his face changed. I was afraid that he was going to be disappointed because he knew what things cost in the U.S.

What happened was something exactly the opposite. He took out half of what I had given him and gave it back to me.

“You are giving me too much. I must return back the extra money you are giving me.” I was taken aback. I insisted that he needed to accept the whole amount because of the excellent service he had provided. He told me, “I can take only what I think I deserve—what I generally would get. I just simply cannot accept all this money in my good conscience.” I looked at him. He certainly was not being frivolous, but in fact, he had dignity on his face. I needed to respect what he said and accept the amount he returned back.

I felt very touched, almost tearful. Why, I thought? Was I simply glorifying the good old Indian acetic values expected from a teacher, or was I romanticizing the notion of a poor struggling artist who preserves his passion? Probably not. Mr. Verma was far from being poor or struggling, and his modest lifestyle was relatively comfortable. I could not forget the dignity he held on his face when he returned the money to me. I also remember my observations of his working style with others while he was arranging art exhibitions with other artists.

Gradually, I realized the deep message in my transaction with Mr. Verma.

Mr. Verma had returned the money offered by a happy customer without any pretentious superiority. He had conducted the transaction simply on his own terms, based on what he thought was the self-respecting value of his work. What he had earned was the dignity with which he held himself and his work. Mr. Verma could have been a rich guy, had he practiced greed, or let us say just our Western notion of measuring success in the amount of money it gave us. But Mr. Verma always did business the way he thought was the right thing, on his own terms, using his own yardstick.

His yardstick was not to become increasingly rich and more famous but to love his art with self-worth and self-respect. The money and fame was the pleasant secondary benefit.

I certainly understood that Mr. Verma was held in high esteem in the town full of accomplished artists, not simply because of his artistic accomplishments, but also because he had never wavered from what he considered as self-respect and dignity.

How do you define success? Is it more rooted in money and material things or do you follow your passion and conscience? I think we can all learn from Mr. Verma that “giving up” a few dollars actually gifts us much more.

Dr. Swati Desai is the Director of Integrative Psychological Services at the The Akasha Center for Integrative Medicine, a Meditation Teacher, and a Psychotherapist. For more, please visit her website and follow her on Facebook and Twitter.

* The above featured image is the art work (6″ x 8″) completed by using the skills taught by Mr. Verma. It’s title is “It’s All in the Chemistry.”

* To learn more about Mr. Verma and his art, visit his website. Please contact Dr. Desai if you wish to connect with Mr. Verma.