Embrace Your Funky Side 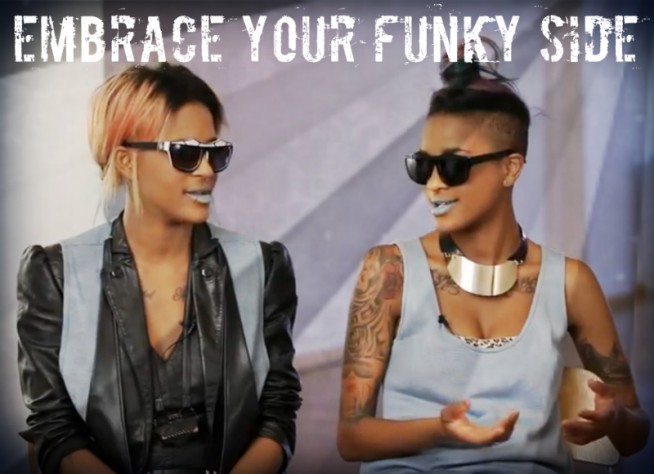 Growing up in a Minnesota suburb, twins Coco and Breezy Dotson marched to the beat of a very different drummer.

They loved dressing in ways that made them stand out, but that same sense of “fashion envelope pushing” didn’t go over well in their conservative midwestern town. They often ended up being judged and outcast by other kids. Then, at sixteen, when their dad became ill, they ended up working three jobs to help support the family, pulling them ever farther away from others.

What would have led so many other teens to cave to conformity only fueled them to embrace what made them different.

“There were lots of lonely times. That’s why we created sunglasses. People used to stare and laugh and point at us because we had a different style. We were misunderstood for just being ourselves…Making eye contact was so difficult. We were shy, timid, nervous. It’s hard for us to approach people. We have confidence when our shield is on.”

Flash forward three years. That same work ethic and drive to develop their own sense of style and way to interact with the world landed the then nineteen-year-old twins in Manhattan’s white hot fashion scene.

With only a few dollars in their pockets, they began making their own bold sunglasses out of a tiny, shared apartment. Almost immediately, people began approaching them in the street to ask where they bought their sunglasses and offering to buy them “off of their face.”

The brand took off. In a few short months, Coco and Breezy’s unique shades began appearing on the likes of Kelly Osbourne, Lady Gaga, Nicki Minaj, Beyonce, Serena Williams, and other mega-celebs. Now, they’re expanding the Coco && Breezy brand and business into a variety of new verticals.

But, it wasn’t all serendipity. Insanely hard work, street smarts, a sixth fashion sense, willingness to be authentic and walk to their own drumbeat, and give back to others drove the rapid ascent.

“All young people should have our attitude rather than ‘I’m young; I still have time.’ It’s not an excuse. Go for it…Never wait on anyone. Continue to do what you want to do.”

In this in-depth episode of Good Life Project, we take you behind the scenes of their story, sharing not only how they launched and grew their business, but how being true to who they are, embracing family, and being positive role models for kids has been a touchstone of their success.