I Want to Meet My Long-Lost Brother 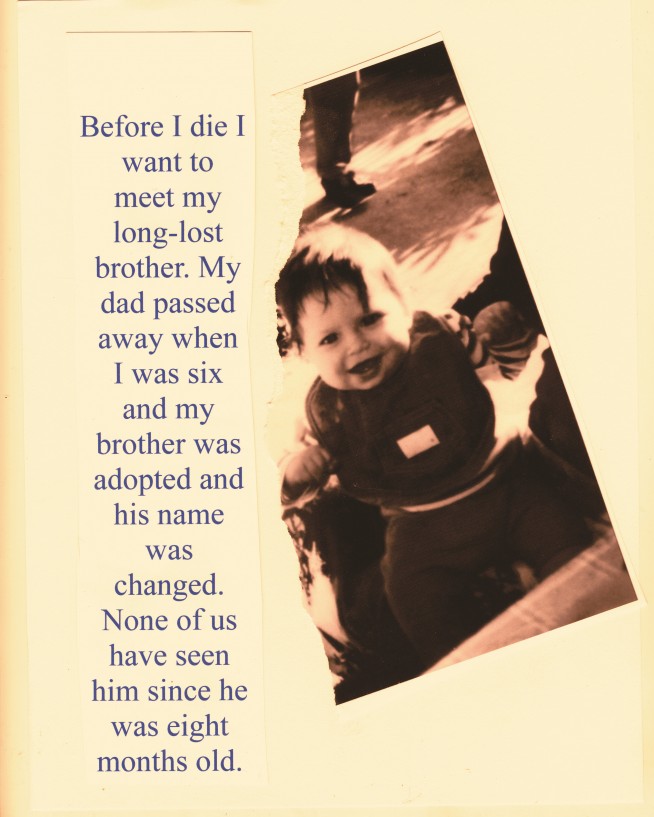 Before I die, I want to meet my long-lost brother. My dad passed away when I was six, and my brother was adopted, and his name was changed. None of us have seen him since he was eight months old.

*Excerpt from What Do You Want to Do Before You Die? by The Buried Life: Ben Nemtin, Dave Lingwood, Duncan Penn, and Jonnie Penn (Artisan Books). Copyright 2012.

The Buried Life’s millions of fans share inspirations, aspirations, and jokes without fear of being judged. When it came time to address #19 on their own list―write a bestselling book―The Buried Life turned to its community, asking the world the same question they first asked one another: “What do you want to do before you die?”

Thousands of fans responded to the challenge, revealing that everywhere, people of all ages are seeking ways to live unburied lives. We chose 150 of these real people’s dreams and commissioned original illustrations of them, one of which is featured above. As Jonnie says, “We are part of a digital generation that expresses emotion through the immediacy of images.” The illustrations are meant to speak to that.

I would love to hear from YOU. What’s one thing YOU want to do before you die?

Ben Nemtin is an actor, producer, and writer. He is a member of The Buried Life and the #1 New York Times Best Seller What Do You Want To Do Before You Die? He can be found at theburiedlife.com, Facebook, and Twitter.