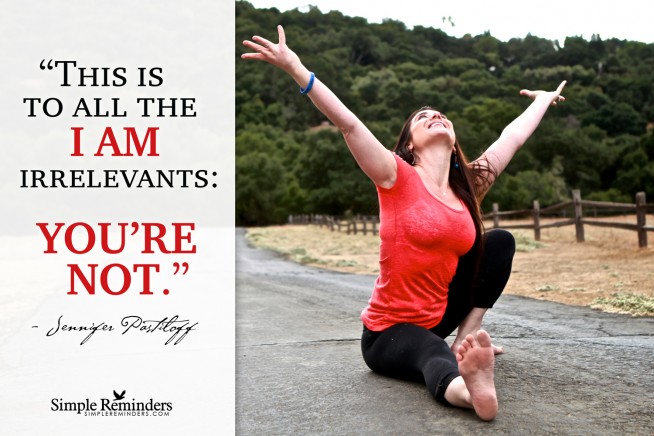 I have often felt as restless as the earth, as afflicted. As inconsolable.

This is to all the I am irrelevants:

Some irrelevant things may be: getting into a perfect crow pose in a yoga class, finding a grey hair, your jeans, what kind of car you have, whether you like to have sex with men or women (or both).

This is to all the people who howl at the moon how lost they are, how bad they suck, how little they have to offer. This is to the voices that speak in languages that love doesn’t understand. A language that sounds like this: I am nothing; I do not matter; I don’t fit in. This is a language that often can’t be translated, and, when it is, it is found out to be gibberish. Bullshit. Untruths.

This is to you all.

I drove across country when I was eighteen years old with my mother and her boyfriend at that time, as well as his two kids. We had a minivan, and I sat in the back reading books and eating dried peaches. I read Love in the Time of Cholera twice on that trip. I prayed that somehow I would get left back on the trip and not have to start NYU in the fall. That I could stay back in the Rockies somewhere and get fat and let myself sink into oblivion. I prayed and prayed in the back of the minivan in my little cut-off red shorts as I bit my nails off. Please let me not be found.

I was starving myself to such a degree that I hadn’t menstruated in years. I remember being in Cody, at this steak house with everyone. I had asked the waitress to take a can of vegetarian chili into the back and open it for me while everyone ordered off the steakhouse menu like polite people. I dreamed of a knife through the fat of a nice juicy sirloin, some well-done barbecued ribs, mashed potatoes with pats and pats and pats of butter streaming off the plate as I ate my canned chili cold.

I thought about sending a postcard to my boyfriend, who had already left for Boston, saying:

I am laughing with bear trappers who eat bear meat and wear bear coats. I am in the Black Hills of South Dakota trying to catch a big fat trout hook right through its mouth, cleaning it. Digging into it and cooking on an open fire, singing songs of the land and the Dakotas. I am in the Rockies high up, high at the top. It’s summer and still snow caps the very top; a walking stick guiding me through the crooked trails around each bend.

I had finished my chili that night and gone to bed in a tent, as was the protocol on our trip. I never did send that postcard, but I wrote it out and kept it as a bookmark in case I did want to send it, eventually.

Years later, I found the postcard in between some pages of Love in the Time of Cholera. I thought I had wanted to get lost, but it was the opposite. I wanted to be understood. I wanted to be left alone with my books and my words, and I wanted to understand why I hated myself so much. I wanted someone to look at me and say, “You are not irrelevant. You are not bad. You do not need to disappear.”

I was trying to do a disappearing act, as it were. If I starved myself enough, I would eventually evaporate. I would turn into ether. I would become the moon.

This is for you, Dear Hopeless Ones. I am you. Don’t you see it? I was there. I was one of the I am nothings, I am hopeless, I am bads.

What a crappy club to be part of.

It’s a mean club, full of liars and storytellers and petty thieves.

You have caught glimpses of your life. You, who think you are irrelevant, have reached out for love and, on occasion, been able to grab fistfuls of its beauty. If you look closely, you can see your life all mapped out. Irreversible veins raised and ready for puncture. The geometry of your life: blue, ingrained, vainglorious.

It’s like how your eyes adjust to things—the inside of an apartment after an eyeful of sunlight. How you can see part of the moon when it isn’t really there anymore: hanging sliver white as pearl on black, its fullness still faintly visible, an illusion. A palsied arc, the fingernail piece of moon that hangs like it’s missing something of itself, waiting out its own cycles. It’s like that. You have to wait out your own cycles.

The moon is never missing any of itself. We just can’t see it. You are like that too.

You may have to wait out your own cycles, too. You may think you want to get lost among the bear trappers, but even then, I will be able to see you. You can never disappear. You can never become ether.

You are as relevant as the moon. And beyond.