Seeing Possible in Your Ideas 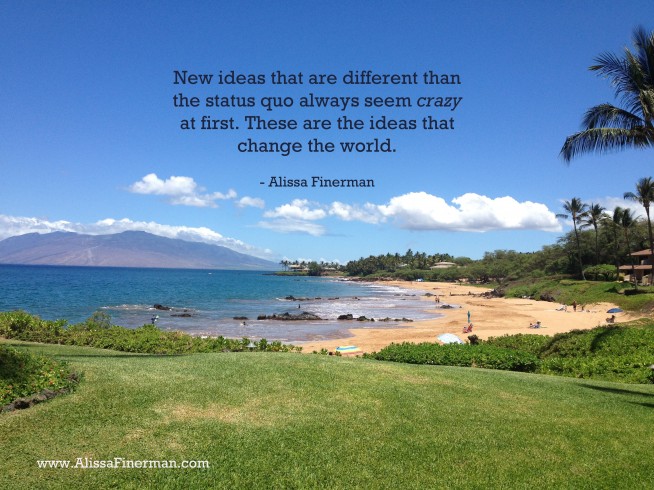 Possible and im-possible are both ways to think. Some people see everything as possible, and others train themselves to see only im-possible. It’s a simple choice. You need a bit of vision to see what can be created and some courage to take one small step after the next when the future is cloudy. There will be various bumps, also known as challenges, on the path that will test just how committed you are to your idea.

First, let’s share a few examples of crazy ideas (a.k.a. impossible to possible)

Second, let’s say “thank you” to all the people who saw possible!

This is the time to embrace YOUR crazy ideas that can make a difference in this world and move forward!

I’ve intentionally shared some extraordinary examples that may seem out of reach. You need to realize that crazy ideas range from small to huge. And what often seems small to one person is big to another and vice versa. There is no need to compare what you can accomplish. It’s a personal thing and unique to each of us. Your crazy idea may be to move across the country, start a family, open a second office, hire another employee, start a charity, create a new product line, launch your product globally, buy another business, or get in the best shape of your life. Successful entrepreneurs have the unique ability to see possible in their ideas and stay with it.

A crazy idea starts with a shift in your thinking and the ability to see only possible as an outcome.

You know you have a crazy idea when the idea seems completely crazy to others but exciting to you. People will doubt you, and that’s to be expected because they don’t see your vision. And remember, any idea that is away from the status quo will always seem like a crazy idea to others. So don’t let a lukewarm response dissuade you from going after your dream. Please note, there may be some ups and downs on this journey. Stay with it!

I’ve had a few crazy ideas of my own…

All of these seemed like crazy or im-possible ideas to others.

It only takes one person to see the possible in an idea, and that’s YOU. Step into your greatness today and GET COMFORTABLE WITH CRAZY IDEAS! You need them to keep your business growing.

What small step can you take today to bring your seemingly crazy idea to fruition and make a positive difference in our society? We’d love to hear your success stories.

Alissa Finerman is a Professional Business/Life Coach, motivational speaker, and author of Living in Your Top 1%. She works with individuals and organizations to help them think bigger, redefine what’s possible, and get results. Alissa has an MBA from the Wharton School and a BA from the University of California, Berkeley. She has appeared on national radio stations such as CBS and Clear Channel Radio and has worked with the Milken Institute, LA Business Journal, Prostate Cancer Foundation, and NBC Universal. To learn more about coaching with Alissa, please visit her website and follow her on Facebook and Twitter.