On Telling the Truth. 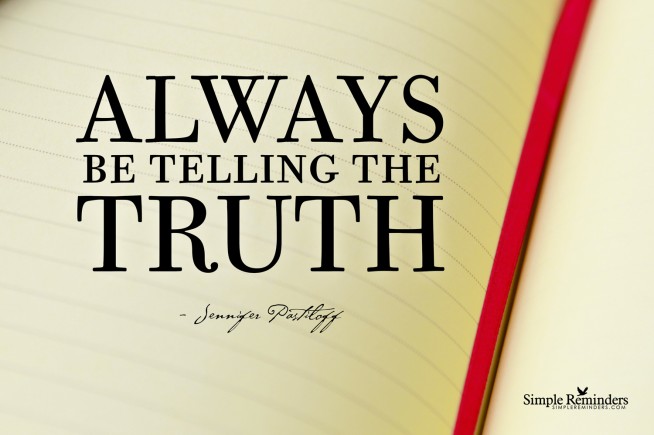 “My belief is that when you’re telling the truth, you’re close to God.”
Anne Lamott

On a winter day in March, I met my friend Robert Wilder in the lobby of the Inn of the Anasazi in Santa Fe, where I had slept the night before. I’d stayed in the hotel room of my friends from L.A., who, coincidentally, also happened to be in Santa Fe. My friend Emily Rapp’s son Ronan passed away from Tay Sachs on February 15, and the memorial was chosen for that particular weekend.

Robert asked where I knew my friend from. I told him that I met her because she took my classes, but that we had become friends.

Robert’s a fantastic writer and a high school English teacher. (He calls his students High Schooligans, if that gives you an indication of his cool-teacher status.) The Robin Williams in Dead Poet’s Society kind of teacher, the kind you appreciate much later upon looking back at who formed you, at who maybe taught you to really love books and writing and expressing yourself. My “Robert Wilder” was Mrs. Lifshey in Cherry Hill, New Jersey, whom I remembering running into when I was getting my hair done for my senior prom. I had been trying on a rhinestone pair of earrings, and she spotted me as she sat getting her own hair highlighted. She bought me the expensive fake diamond earrings “anonymously” that my mother couldn’t afford at the time. (My mom knew and didn’t keep it anonymous.)

Robert and I sat on the leather sofa in the lobby of the Inn of the Anasazi, and he asked me, “Is it hard to be friends with your students?”

I’d rather think of them as my tribe. Or not-studenty students.

But yes, it can be hard, I suppose.

Here’s why it can be hard with my not-studenty students: I am afraid to expose myself and have them see that I am a regular person who gets depressed and thinks she looks fat sometimes and drinks too much coffee and wine and doesn’t always walk the talk.

I write about it, but there is a difference in writing about it and then actually having someone see you in the flesh as the youest you there is.

My belief is that when you are telling the truth, you are close to God. So says Anne Lamott. Yet and still, my paper creates a chasm, a separation. A wall between me and everyone else in the world. There is a distance between the reader and myself, even when I am being my most vulnerable and truthful.

There is a little bit of Us and Them when you are standing in front of a class. You are in a glass case, and although everyone can hear you, no one can really get in. There is a you can’t really see me even though you think you can.

When you are with someone in person over lunch, that distance is minimized, and then there they are, right up in your face, their eyes all over you, their minds making up stories and facts.

A couple months ago, I went to Atlanta to see my sister and nephews and to lead a workshop. My sister mentioned to me that she had said something to my friend (who had started as a not-student student) something about me always being on my phone.

I told my sister that she should have not said that to this person. That it made me look badly, and that I had an image to uphold. (Ha!) Me always being on my phone suggested that I wasn’t present, that I was full of shit. How dare she say that to someone who takes my classes? She felt badly and said that she thought this person and I were really close friends. “We are.” I said, “But still.”

There is no but still.

The distance was zippered up, and there was no space between us anymore, and it’s true I look at my phone too much. It’s an addiction. I didn’t want that side of me exposed because, in my mind, it was bad enough I was friends with my not-studenty student, but now they would see all my faults and that I was full of sh*t, and they wouldn’t be my student or my not-studenty student and, possibly, not even my friend.

I was terrified I would become some sort of fallen icon. As teachers of any kind, we’ve all had people become fixated or obsessed and tell us How Amazing We Are, and then, one day, they get bored or decide you are a Real Life Human Being, and you never hear from them again.

I was terrified that someone who sees me as an inspiration would realize I look at my iPhone too much and that I don’t pay enough attention and dismiss me.

But it’s only hard when I make it so. Yes, it is hard for me to be friends with everyone. (I am not special in that truth.) No one can be there for every single person nor should they be. I can’t go to everyone’s play or show, but there are indeed some people that I meet because they take my class or read my writing whom I know I want to have a glass of wine with. It is incidental to me that we met through my yoga class or my retreat or my blog.

Why should I be any better than them or put myself on a pedestal because I teach them how to do a downdog or because they read an essay and feel inspired by something I said?

Everyone in my life is my teacher. You. You reading this. Everyone. (We should all recognize this more often.)

I want to do better.

I want to do better than yesterday, at least. I want to be more present and not look at my phone so much and never to gossip and all the rest, but the people who learn from me are pretty clear that I am not a guru or saint.

Yet, I also want to live a congruent life. That is what it really boils down to. My belief is that when you’re telling the truth, you’re close to God.

ABTTT. Always Be Telling The Truth.

If someone takes my class and then we become friends and they decide they no longer want to take my class because the boundary has been crossed or because I curse or don’t do enough of my own yoga practice, well then, so be it. What can I do? They come; they go; they come again, and all the while, I am here ABTTT or doing my best version of it.

My belief is that when you’re telling the truth, you’re close to God.

I can love as best as I can, and I can keep teaching and writing, but I cannot be friends with every single person who takes my class or reads me. It’s not humanly possible, and that’s okay. The people pleasing days are falling away, and the days of ABTTT are coming fast and hard.

So what does it matter if someone takes my classes and also eats pancakes with me? It doesn’t. It would matter if I was a vastly different person on paper or in class that I am in “real life,” but I am not.

They are people. I am people. The same.

Most of the people in my life now entered via my yoga classes or my writings. I say Thank God for the not-studenty students who have turned into beloveds. Thank God I found you.

As I was getting on the plane (you guessed it, I wrote this from the airplane), I saw an old man reading an even older looking book called You Should Only Be Happy.

(Oh, that awful “should” word. There it is again.)

The book was written by a Jewish man and, from what I could gather, was a lot about Jewish culture. I started talking to the man, and he was a Jew from New York who now lived in Santa Fe. I chuckled as he held my hand.

I said, “So are you part of the Tribe?” (an oft-asked question Jews sometimes ask one another), and he looked at me and said, “Isn’t everybody?”

So, is it hard to be friends with my students? Yes and no and everything in between.

Aren’t we all human? Isn’t, as my new airport friend put it, everybody part of the tribe. Isn’t everybody?

You Should Only Be Happy. Always Be Telling The Truth. Stop Looking At Your Phone So Much. Pay Attention. Drink More Water. Honor The Dead. Drink With Loved Ones. Eat Bread Baked By Your Friends. Have More Sex. Read George Saunders. Do Some Yoga.

Look, I don’t know about any of the above. What do I know, really? The only thing I know for sure is that telling the truth is everything.

The man I met in the Santa Fe airport.