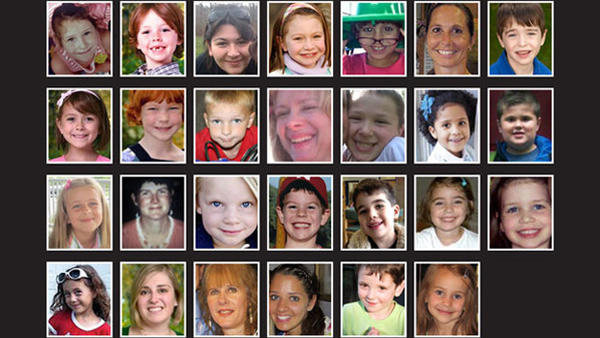 Over the last twelve years, I have watched as two of my siblings each welcomed four children into the world, children that I consider the loves of my life. Most recently, I have witnessed the miracle of life again, as some of my closest friends have become mothers and fathers to beautiful little babies, too.

Each of my friends and family members that have become parents have changed—forever altered as their hearts now walk around outside of them, laughing, crying, playing, dancing, singing, and going to school.

It is the going to school part that brings me to write this post today. One year ago today, twenty precious, loveable, and adorable little children went to their school, said goodbye to their moms and dads, blew kisses from the school bus, only never to walk out of the classroom again.

When you hear about a child dying from a gun shot, usually you hear something like “that child was in the wrong place at the wrong time.” In this case, these kids were in the right place, at the right time, but a sick person with an arsenal of weapons and bullets was able to get to them anyway.

This is not a message about despair, so stick with me, as I know reading about senseless deaths of little children is hard to do. It is basically impossible to imagine it. I have tried. One of my nieces and one of my nephews were the same age as the Sandy Hook children who died that day, and I looked at them with tears bubbling out of my eyes, and I. Just. Couldn’t. Imagine. Lifeless six-year-old bodies lying amongst their crayons and winter boots, juice boxes and drawings, is beyond our comprehension. So is the reason why. I don’t have an answer for that. I don’t think any of us ever will.

A few weeks ago, I met a woman named Scarlett Lewis whose six-year-old son Jesse died in his classroom, with his classmates, on that day. Nine students survived in his classroom because Jesse saw the gunman’s gun jam and he yelled, “Run! Run now! His gun jammed!” according to all the surviving children whose lives he saved that day.

Out of the darkness, light emerged.

Jesse acted as a hero that day—a little angel who stayed by his teacher’s side while the gun jammed, choosing to warn his classmates rather than make a run for it. Jesse is a hero.

Scarlett told me the story of Jesse’s actions that day, and she also told me that when she returned to her home after avoiding it for a few weeks in the aftermath of the shooting, she saw that Jesse had left her one final message. Scribbled on the chalkboard they had at home were the words “nurturing, healing, love.” These words were not part of Jesse’s normal language, probably not part of most six year olds’ language.

Scarlett felt that Jesse had left her a message. A lesson she needed to begin teaching to school children and adults alike—the message that, in every part of our day, we have the choice to Choose Love.

I ask each of you, in honor of those precious little people who died that day and the six adults who tried to save them but lost their lives, as well, to…

Commit once a day to turning a thought of hate or anger into a thought of love.
@serenadyer (Click to Tweet!)

Serena Dyer is a writer who recently completed a book with her dad, renowned author and speaker Dr. Wayne W. Dyer. The book, Don’t Die with Your Music Still In You is scheduled to release in Spring 2014. Serena Dyer is a student and human rights activist whose mission is to eradicate child trafficking through advocacy, education, and research for the Stop Child Trafficking Coalition.