How Breakdancing Saved My Life 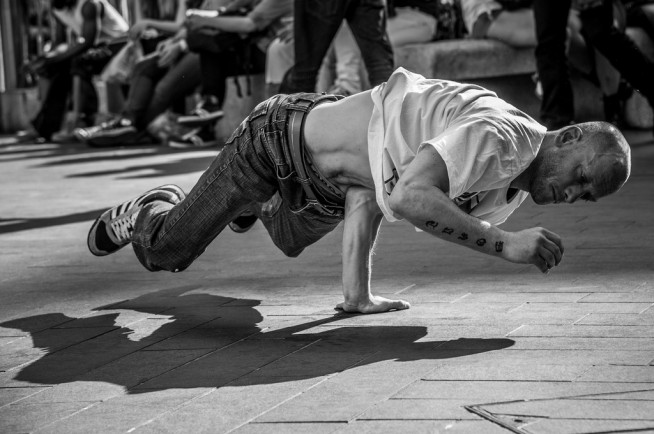 I went up to these kids in a club, and I told them I would pay them ten pounds if they could teach me how to breakdance.

Breakdancing and rap music seemed like the coolest things in the world to me. I was on a summer abroad program with a bunch of Jewish kids who would stay with different families in London. Everyday, there were tours.

I hated the other kids, so once I landed in England, I never went on any of the tours.

They had these thick Long Island accents, and the guys had suitcases filled with condoms. We were all about fifteen. I was a self-hating Jew, but I justified it as “New Jersey versus Long Island.”

My entire knowledge of breakdancing came from the classic movies: Breakin’ and Beat Street, not to mention one scene from the movie Flashdance, which had the Rock Steady Crew in the background (they were also in Beat Street).

My entire knowledge of rap came from Run DMC, which was the first rap group to crossover with a metal guitar (listen to “Walk This Way”).

The day before I left for the trip, I lost one contact lens. So I decided not to bring contact lenses, and I had no glasses. Consequently, I was blind the entire trip. I couldn’t see more than three feet in front of me.

Blind and on my own, I spent everyday in what I guess is the equivalent of a ghetto right outside of London and tried to learn how to breakdance with my paid-for friends.

Everyone wanted to know what it was like in “The Bronx.” I would tell them stories about how you could get knifed there and everyone was out to kill everyone else.

I was from suburban New Jersey. My neighbors were Indian doctors. My father was running a struggling business that eventually went bankrupt.

I had never been to the South Bronx, which is the only area they were referring to when they said, “What is the United States like?”

We would go to different places in London and lay down linoleum and everyone would backspin and they’d collect money. I was horrible.

Some girl came right up to me and said, “You’re no good.” It hurt my feelings because I always cared too much what people thought about me. My new friends had to cheer me up.

I still care too much about what people think about me. I spend too much of my day thinking about what others think of me.

On the plane back to the United States with the tour group, the tour guides had to triple check their list of people. “Who are you?” one of them asked me.

Once back, I showed my friends my new breakdancing “skills.” Everyone laughed at me.

My grandmother would yell at me, “What are you going to do with that? Can you get into college with that?” I showed “the wave” to my dad, and he asked me seriously if I was gay and told me he was okay with it if I was.

I made a new set of friends for a while, and we’d practice breaking after school everyday and then, on weekends, go to no-alcohol clubs where we could dance. I bought a piece of linoleum, and my friends would come over and we’d practice on that.

Nobody thought I was any good…ever. And I wasn’t.

Eventually, the Chess Club in my school needed an extra #4 to take the place of someone who got sick. We were going to play a match against some other school.

How does your passion find you? When you are good at something, you get passionate about it. That’s it.

I would not have had a place to live when I moved to NYC. I would not have made all my friends in Washington Square Park who, twenty-five years later, I am still friends with.

I was a blind Jewish breakdancer from the suburbs who was no good. But I only do the things I love. Even when everyone hates me. And every now and then, somebody doesn’t.