This Is Not Your Happily Ever After 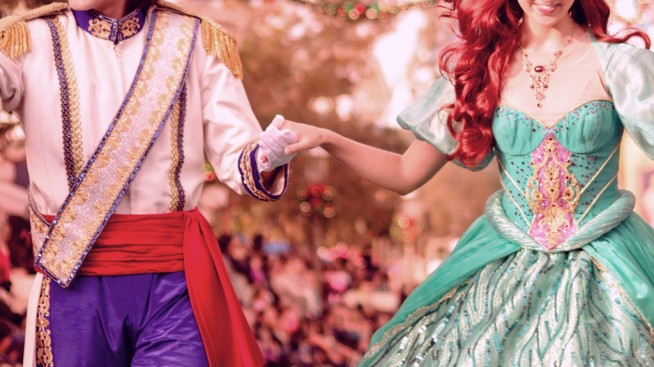 I remember standing beside the man I was married to at the time while a woman was saying, “All this success! It’s like a fairy tale.”

She was talking about our life together—my life.

I didn’t want to disagree, even though signs of the end were already manifest, the good times slipping away beneath the criticism, the way his voice would turn cold before he stopped speaking to me. Are we in the fifth grade? I sometimes asked, trying to make light of it. His mother said I took him too seriously, that I let him affect me too much, and maybe I did. But he was my husband.

And I had yet to read a fairy tale in which the prince sweeps in on a white horse—or midnight blue Porsche—and then gives you the silent treatment.

It wasn’t until years later—after the ugliness that marked the end of the relationship, the separation that shocked some and delighted others, the obscenely expensive lawyers, the never ending divorce, the emails I sent that I knew I would regret but felt too hurt and furious to care (and I was correct, I would regret them), the slow hard climb into my new existence, after our truce turned from hostile to uneasy to peaceful to the faint possibility of friendship, after I realized, with more than a little surprise, that when I encountered him at the preschool, or the hospital when one of our sons had minor surgery, I was enjoying his company again—that I learned the truth about fairy tales.

I only knew the Walt Disney versions. Beautiful girls suffered at the hands of wicked women and pined for the day their man would arrive with his dragon-slaying heroism and magical kiss. These stories were fluff and romance. They were dangerous. They taught a girl to be deluded, trusting, and passive, rewarded for her looks alone (and maybe a bent for emotional masochism).

But this is not how fairy tales started out.

Unless and until they are written down—or recorded in vivid, dancing Technicolor—stories are not static things. They shape shift from one place or period or culture or social group to another to code certain values and transmit a prevailing worldview.

And as Joan Gould points out in her book Spinning Straw into Gold: “The more patriarchal and stratified the society, the more clearly the heroine is expected to rely on the hero to save her.”

Fairy tales were originally female tales. They were women’s work: handed down from mothers to daughters.

In these versions, heroines were not pretty victims killing time and waiting for rescue. Sisters rescued brothers; daughters rescued fathers or lovers.

And when a heroine fell into a deep, enchanted sleep, she was about as passive as a caterpillar turning into a butterfly. Sleep was not her prison but her chrysalis. She assimilated her body’s newfound sexuality and made the inner journey from girl to woman…in her own time. Men might be eager to bed her; her parents might be ready to marry her off; and she might have no legal rights to speak of, but the one thing she could do was close her eyes and withdraw into some serious Me Time. Her body remained complete unto itself, sealed off and protected by a glass coffin, a forest of thorns, a ring of flame.

When she had matured—when the process of ripening had come to its natural end—she awoke to the Prince who was both her reward and the symbol of her adulthood.

(Note: he didn’t actually wake her up himself. He was in the right place at the right time and had a tendency to take all the credit.)

No growth, no story.

Transformation, these tales make clear, doesn’t come easy. It involves suffering, struggle, sacrifice, and pain. Skills must be acquired, lessons learned, experience hard-won. Often, there’s a period of wandering in the wilderness—the forest, the desert, the snowscape—alone. Without this, remarks Gould, “no real change is possible.”

You must lose the old life—or get forced out of it – if you are to come into the life that is waiting for you.
@justinemusk (Click to Tweet!)

Walt Disney wasn’t interested in any of this. He took the spotlight off the heroine’s initiation into higher consciousness and put it, instead, on the hero’s heroics, as he battled the dragon and fought the witch for possession of the beautiful virgin.

Suddenly, a girl could be transformed into a woman with a single kiss. All she had to do was wait for The One who would bestow it so that her real life may begin.

So many of us keep waiting.

But what if the prince is meant to be a metaphor? When you fight your way through painful experience, when you descend into your personal underground and come back up into the light, when you retreat from the world into a kind of slumber, a waking dream, to assimilate your truth and grow strong enough to carry it: what if the prize for all of this, for getting through to the other side, isn’t a man on a white horse with a feathered hat on his oversized head, but a more integrated sense of self and a vision for your future that makes you come alive?

And you learn that you are stronger for the broken places.

This doesn’t happen only once. Initiation comes for you again and again throughout a lifetime. The ground opens up beneath you; you eat the poisoned apple; you descend once more into the dark. You wander through some bleak internal landscape until, finally, there’s a crack in the clouds—”there’s a crack in everything/that’s how the light gets in” (Leonard Cohen)—and you turn your face into the sun. You rise into your reborn self, spiraling up a little more with every transformation.

You look into your prince’s face and discover that it is your own.

You have opened your eyes.

Justine Musk is the author of three traditionally published dark-fantasy novels and blogs about the relationship between creativity, shadow, personal power, and sexuality. She believes that being uncooperative with bullshit is to be cooperative with your own audacious truth.