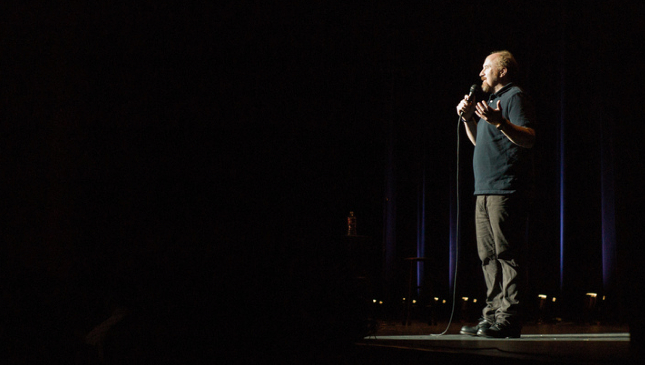 Louis CK is my favorite comedian. Is he yours? If so, I hope you like this post.

Because I can spend hours breaking down every line of his routines. He’s the high priest of understanding our culture.

I watch him every day. I watch the same routine over and over. I watch him before I give talks because I get to borrow his confidence.

If you have other favorites, please put them in the comments. I need new people to watch.

I first saw him perform live in 1995 or 1996 at the Aspen Comedy Festival. I wanted to be a standup comedian but I was too afraid to even go on a stage. Then I wanted to do a TV show but kept getting rejected. So finally I switched industries and started an Internet business.

I went to the Aspen Comedy Festival two years in a row. One time I bored Dave Chapelle to death. I kept talking and talking and finally he said, “Excuse me, I have to get out of here and find me a girl for tonight!”

Another time there I asked Al Franken if I could interview him. He looked me up and down and said, “No” and walked on. Fair enough. Now he’s a US senator and I just write random stuff on my Facebook wall.

Louis CK did a bit in his last show that was sort of outrageous. It begins with killing kids and ends with justification for slavery.

In the joke, to get laughs he uses the exact same sales technique that has made the Hare Krishnas billions of dollars and should be used by everybody on a daily basis.

In the joke Louis CK starts off saying “Children who have nut allergies need to be protected… OF COURSE, BUT MAYBE…if touching a nut kills you…you’re supposed to die.”

Everyone laughs and claps.

He has funny delivery. He says “Of course not, Of course not, but maybe, but maybe,” and then he holds his hand over his eyes and says “if we all do this for a year we’d be done with nut allergies forever.”

Everyone laughs. It’s funny. He has some compassion in it (“of course NOT, BUT”) so he’s forgiven. I forgive him. He makes it funny and we clap.

He does a few more. Then he says, “OF COURSE… Slavery was bad.”

And suddenly he hit a third rail. Everyone stops for a second. They don’t know whether to clap or not. It’s against the rules!

But then he hits the entire point of the joke. The reason the joke is so funny.

The entire reason Louis CK is an artist and has risen to the top of his profession.

He goes up against that awkward pause from the audience. He then goes past it and bring them with him.

The walls are in our brain. Art bangs against them and forces us to go “OUCH!” or have some other reaction (laughter, creation, innovation, excitement).

When people stop laughing for a second at the word slavery, Louis CK stops his joke and unveils the real joke:

“Listen, listen, YOU ALL clapped for dead kids and the nuts. ” He then mimicked the clapping. In every way he reminds them of how funny they thought kids dying of nut allergies was. And how ludicrous it is but they still laughed.

Then he points out the whole audience, “So you’re in this with me now, do you understand? You don’t get to cherry pick. Those kids did NOTHING to you.”

And now the audience was laughing again. Even louder than before. Some people were cheering. He was ready now for his joke on slavery.

This was what was funny. The reality is: they did have the right to cherry pick.

But he used a clever psychological technique to make them think they didn’t. And it’s the same trick Hare Krishnas have used to raise billions of dollars.

When the Hare Krishnas first started preaching in airports they had nothing going for them. Nobody would listen to them.

They raised no money. They were failures. Who would give money to a strange looking shaved guy dressed in robes with totally different beliefs who had his hand out?

Then everything changed and they became the fastest growing religious movement in the United States in the 1970s. They raised billions of dollars.

What did they do? What changed?

The first thing they would do when they met you was give you a five cent daisy. In fact, since so many people threw out the daisies, they often gave you a used daisy because they would fish them out of the garbage cans.

And yet, once you took that daisy, your brain flipped an evolutionary switch. You were ON!

You would now HAVE to listen and maybe even agree with the rest of their story and give them money.

There are two rules at work here:

1) The law of reciprocity. If someone does something for you, the brain feels obligated to return the favor. Evolution weeded out the people who would not do anything for you. People learned to cooperate like this so they would survive in the jungle.

But the law of reciprocity is really just a subset of this rule which governs almost every transaction and conversation in our lives.

2) Commitment bias. If you say “yes” to something small, your brain has already decided, “this is someone I can trust and say “yes” to”.

For instance, in a study, if someone asks you “Would you be interested in hearing about causes that can help the environment?” (almost everyone says “yes” because that’s an easy “yes”) then you are about 50% more likely to donate when a donation is asked for than if you hadn’t been asked that simple first question.

Commitment bias works because you had to know who was reliable in the jungle 100,000 years ago. You had to know if someone was on your side or not. If they demonstrated it once, then chances are they are on your side and were trustworthy.

Do you want to know what the most popular article ever on my blog is?

It’s the one where I say nobody should ever own a home again. People hate this article.

They hate it because there’s probably nothing else in life with higher commitment bias. If you just put $100,000 (or $10,000) down on a home and more on maintenance, taxes, etc you don’t want anyone telling you you made a mistake. You have HUGE commitment bias as opposed to the second before you put any money down.

Louis CK made use of the second law (the first law is implicit – he is putting on a show for them so he is giving them something) in this joke.

He got them to laugh to a milder version of the joke (peanut allergies, where even he says, “of course not. I have a nephew with peanut allergies and I would be devastated if something were to happen to him, so he shows his compassion. He’s one of us.)

But now they are in. They took the flower. Now they have to hear the more extreme version of the joke (“Slavery”) and they even have to laugh (like people would have to donate BILLIONS to the Hare Krishnas).

He knew this (“You’re all in this with me now” even though they weren’t really) and their brains were sucked in and, when you listen to the video, they are actually laughing even harder now.

When dealing with people in business or even in relationships, get them to “yes” on something simple. Then they are IN.

This is why learning the “Power of No” is so important. It fights our evolutionary tendencies that were important for 500,000 years but are no longer as important.

I love this joke. I laughed. Because he also makes subtle reference to history.

Every major language in the world: English, Spanish, Han Chinese, and Arabic, are the languages of genocidal empires that at one point or other, conquered the entire world.

So as much as you like to speak English, and as much as you like our culture and art and everything, it’s the result of centuries of conquest and killing and slavery. And we live in it and order take out and watch American Idol and participate in the culture.

So you’re all in on this now. You can’t cherry pick your history.

Which is what Louis CK’s joke is really about without him explicitly saying it. It turns history upside down, it uses clever psychological tactics that are used (and often abused) in marketing, and he gets people to laugh all at the same time.

That’s why Louis CK is the master. That’s why I love him.