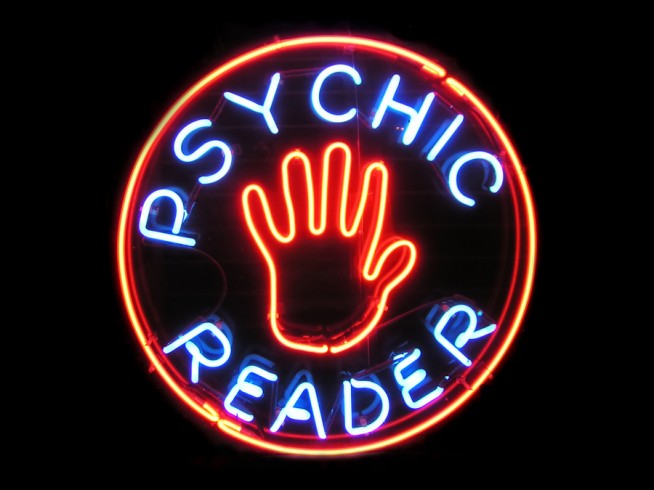 When I first moved to NYC, Mark told me that every place you see a sign advertising “Psychic Upstairs” it meant that there was a prostitute.

I never tested his theory out but I assumed he knew what he was talking about. This was 1994. Mark also told me, “money is growing like trees here. It’s about time you got here.”

In August it will be twenty years in New York. I don’t know if I ever got “here” yet.

I wanted to go see a particular psychic. Jeff, a well-known venture capitalist, told me, “I owe my entire career to Mercedes.” So he gave me her address.

He was a Harvard MD / Lawyer and was an investor in biotech and had done very well.

All you need to do to sell anything to me is basically say someone smarter than me says it’s “good.”

Then suddenly I’m on a bus to wherever. Trying to get someone to tell me my future.

I remember going on a bus and leaving Manhattan. At that time, this was an unusual and scary thing for me to do.

I sort of felt everything in the world that was worth knowing or doing or feeling had been stuffed into this tiny island. People GO to Manhattan, they don’t leave Manhattan.

And if they do leave Manhattan on a bus instead of a plane (say, going to Los Angeles, where pretty people live), then it’s probably the bus of SHAME.

But I was on a bus and within seconds we were underneath the Lincoln Tunnel, itself a miracle.

Do you ever get this feeling that the world is “done?” That They all finished it by the time we were born.

By the time I was born, all the tunnels and bridges and big buildings and elevators and planes and so on were all finished. Everything was all taken care of so I could go incredible distances without any effort at all, in this case – traveling 100 feet underneath the Hudson River for a mile and a half to a town right on the other side called Weehawken.

I never would have stopped in the town of Weehawken unless I wanted something magic and perhaps sexual to happen to me.

Even though I was there on time the psychic’s store (selling Jesus statues) was busy so she told me to come back in two hours. Everyone in her store was speaking Spanish.

I wandered around for two hours, not understanding anything anyone was saying. We were probably around three miles “as the bird flies” from where I lived. But it was like another galaxy that had never been discovered.

I figured if I was ever on the run from the law I could just go here and find a small apartment, grow a beard, and order groceries every day and fall in love with the girl who delivered them. She had big brown eyes in my daydream.

She would fall in love with me and gradually I’d learn a few words of Spanish and we’d have some Spanish kids and we would grow old together and I’d play dominos in the street, wearing a white t-shirt and jeans like all of my new friends, with some sort of Spanish music playing from my car radio with the door of the car open.

That was my plan.

Two hours later I was back at the psychic’s store.

She told me all sorts of things but I remember none of it. Then I’d wander around again until the sun set and I found a bus or cab that would take me back through the tunnel. Maybe seven hours after I left.

I went back to visit her maybe five or six times over six or so years.

I don’t remember anything. She was never really right about anything. All I had wanted was for someone to simply put an X on future calendar boxes signifying the days I would cry. She couldn’t do that.

But I do remember being lost while waiting for her. Incredibly lost so I could take a break from thinking about whatever it was that guy, James, had been thinking about. Loser.

To wander around a world so disconnected from anything real that your imagination pops open like gifts on every corner, in every cafe, in the eyes of every woman who catches you staring (creep).

“Don’t do A-Z thinking,” a friend of mine told me the other day.

Sometimes I want to spread out the map, I’m at point A, over there is point Z, and here is how I get there if I hold my breath in between. “The trip won’t be so bad if I ignore it,” I think.

But sometimes its fun to take a random letter (let’s say “Q”) and stop and disappear for a little bit into it. Dive into the Q.

And on the bus ride home, I’d burst into a Manhattan filled with white noise, and I’d still carry over that feeling of being completely lost and alone and wanting nothing, my forehead resting against the window, all my dreams and fears darting back and forth like fireflies melting into dusk.

Don’t be afraid, little boy. Sometimes it feels good to get totally lost and one day if you are lucky, you will never find your way back.