The Power of Architecture: How the World Around You Shapes Your Thoughts and Actions 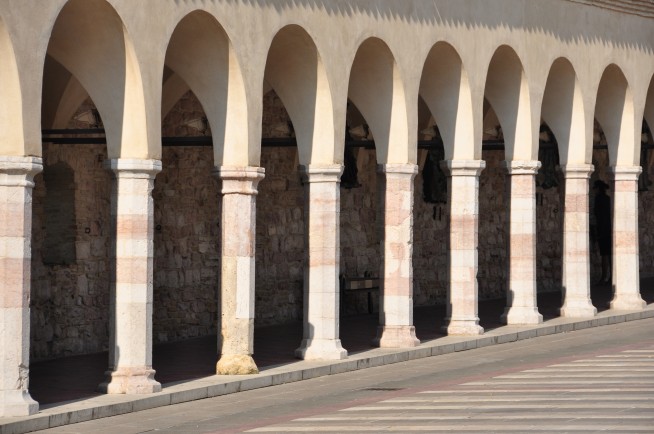 In 1952, polio killed more children in America than any other communicable disease. Nearly 58,000 people were infected that year. The situation was on the verge of becoming an epidemic and the country desperately needed a vaccine.

In a small laboratory at the University of Pittsburgh, a young researcher named Jonas Salk was working tirelessly to find a cure. (Years later, author Dennis Denenberg would write, “Salk worked sixteen hours a day, seven days a week, for years.”)

Despite all his effort, Salk was stuck. His quest for a polio vaccine was meeting a dead end at every turn. Eventually, he decided that he needed a break. Salk left the laboratory and retreated to the quiet hills of central Italy where he stayed at a 13th-century Franciscan monastery known as the Basilica of San Francesco d’Assisi.

The basilica could not have been more different than the lab. The architecture was a beautiful combination of Romanesque and Gothic styles. White-washed brick covered the expansive exterior and dozens of semi-circular arches surrounded the plazas between buildings. Inside the church, the walls were covered with stunning fresco paintings from the 14th and 15th centuries and natural light poured in from tall windows.

It was in this space that Jonas Salk would have the breakthrough discovery that led to the polio vaccine. Years later, he would say…

“The spirituality of the architecture there was so inspiring that I was able to do intuitive thinking far beyond any I had done in the past. Under the influence of that historic place I intuitively designed the research that I felt would result in a vaccine for polio. I returned to my laboratory in Pittsburgh to validate my concepts and found that they were correct.”
-Jonas Salk

Today, the discovery that Salk made in that Italian monastery has impacted millions. Polio has been eradicated from nearly every nation in the world. In 2012, just 223 cases were reported globally.

Did inspiration just happen to strike Salk while he was at the monastery? Or was he right in assuming that the environment impacted his thinking?

And perhaps more importantly, what does science say about the connection between our environment and our thoughts and actions? And how can we use this information to live better lives?

The Link Between Brains and Buildings

Researchers have discovered a variety of ways that the buildings we live, work, and play in drive our behavior and our actions. The way we react and respond is often tied to the environment that we find ourselves in.

For example, it has long been known that schools with more natural light provide a better learning environment for students and test scores often go up as a result. (Natural light and natural air are known to stimulate productivity in the workplace as well.)

Additionally, buildings with natural elements built into them help reduce stress and calm us down (think of trees inside a mall or a garden in a lobby). Spaces with high ceilings and large rooms promote more expansive and creative thinking.

So what does this link between design and behavior mean for you and me?

Researchers have shown that any habit you have — good or bad — is often associated with some type of trigger or cue. Recent studies (like this one) have shown that these cues often come from your environment.

This is important because most of us live in the same home, go to the same office, and eat in the same rooms day after day. And that means you are constantly surrounded by the same environmental triggers and cues.

If you’re struggling to think creatively, then going to a wide open space or moving to a room with more natural light and fresh air might help you solve the problem. (Like it seemingly did for Jonas Salk.)

Meanwhile, if you need to focus and complete a task, research shows that it’s more beneficial to work in a smaller, more confined room with a lower ceiling (without making yourself feel claustrophobic, of course).

And perhaps most important, simply moving to a new physical space — whether it’s a different room or halfway around the world — will change the cues that you encounter and thus your thoughts and behaviors.

Putting This Into Practice

In the future, I hope that architects and designers will use the connection between design and behavior to build hospitals where patients heal faster, schools where children learn better, and homes where people live happier.

That said, you can start making changes right now. You don’t have to be a victim of your environment. You can also be the architect of it. Here’s my simple two-step prescription for altering your environment so that you can stick with good habits and break bad habits:

Here are some examples…

These are just a few examples, but the point is that shifting your behavior is much easier when you shift to the right environment. Stanford professor BJ Fogg refers to this approach as “designing for laziness.” In other words, change your environment so that your default or “lazy” decision is a better one.

By designing your environment to encourage the good behaviors and prevent the bad behaviors, you make it far more likely that you’ll stick to long-term change. Your actions today are often a response the environmental cues that surround you. If you want to change your behavior, then you have to change those cues.

For more ideas on how to set schedules and stick to habits for the long-term, read my free 45-page guide: Transform Your Habits.

This article was originally published on JamesClear.com