Why I Send My Kids to Camp 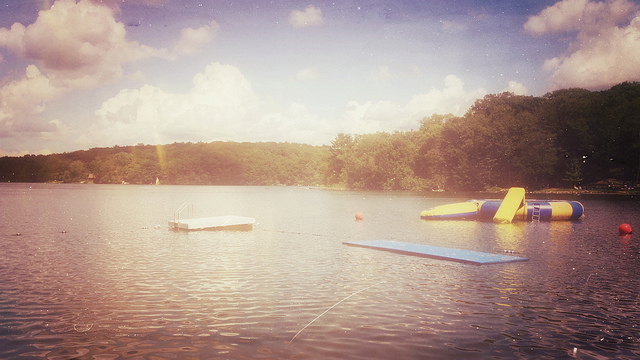 This year, they’ll be away for THREE weeks. I’m heartbroken and kidsick already.

On Saturday, my kids will go off to sleepaway summer camp again in the high Sierras—their third year in a row at Gold Arrow Camp.

I will never, not ever, forget the first time I dropped my kids off at camp. The drop-off didn’t go very well.

When I was a kid, I begged and begged to go to sleepaway camp with my best friend, Rory. I did extra chores to earn it, and I counted the days until I got there. I don’t remember being homesick, or sad at the drop-off. I remember feeling wild and free. I loved the horses and the outdoors and ceramics. I got postcards from my teachers. It was awesome.

My kids had mixed feelings about going to camp that first year: They were excited, but also scared. “TWO WEEKS!?” my youngest cried when I told her what, to me, was great news: They were going to summer camp! “They have horses!” I said cheerfully, trying to drum up excitement. “And sailing! I’ve never been sailing myself,” I mourned. “You’ll get to do it before I do!”

I said this knowing full well that sailing is actually not on my daughters’ bucket list. It’s on mine. The kids spent the last few weeks readying for camp and making serious sister pacts to stick together. My younger daughter, Molly, was particularly concerned about what would happen if her older sister made friends first. Would Fiona and she still pick the same activities? Could Molly join Fiona with her new friends? Pinky-swears of allegiance were traded, plans to sneak into each other’s cabins made.

Molly had a plan: Fiona would take care of her. She was nervous, but also excited.

That is, until about an hour before we arrived at camp. At which point Fiona became more clammy than cool and collected. She developed vague “not feeling well” symptoms. She was too carsick to eat lunch. When we arrived, she was faintly green.

Altitude sick, I declared. “Drink some water,” I insisted. “Take deep breaths,” I said, taking them myself. “Think good thoughts, Fiona. Find two things to be excited about.” Frankly, I was feeling faint myself.

But the thing is, I believe that it is important to challenge kids. @raisinghappines
(Click to Tweet!)

To get them truly outside of their comfort zones so that they can grow.

Hence two weeks instead of a mini-camp. My desire to challenge my kids was reinforced in an Atlantic article about “Why the obsession with our kids’ happiness may be dooming them to unhappy adulthoods.” The gist of this article is that “kids who always have problems solved for them believe that they don’t know how to solve problems.” And the article is right—they don’t.

The article reminded me that happiness—an often fleeting emotion—in and of itself is not the goal. That comfort—my own or my children’s—is not the goal. Instead, all of this is about how to lead a happy life. And while it’s true that a happy life comes from positive emotions (like gratitude and compassion, for example), it also comes from having the tools we need to cope with life’s inevitable difficulties and painful moments.

My kids have had their difficulties—my divorce, a move away from a beloved school and neighborhood, a humbling medical situation—and they’ve risen to each challenge, though not without pain. (I’d like to pause to acknowledge that even with those difficulties, my kids have a pretty cushy life. We don’t have to worry about where the next meal is coming from or where we will sleep tonight. That said, the fear the kids had anticipating me leaving them at camp was very real to all of us.)

At any rate, by sending my kids to camp, I was sending them the message that I believe that they can manage loneliness, and homesickness, and anxiety. I believed that they could, at the tender ages of eight and ten, handle these difficult emotions themselves, without me standing over their shoulders telling them to breathe. As awful as it sometimes feels to me, they simply don’t always need me there, telling them what to do and what to think.

By sending my kids to camp, I send them the message that I think it is incredibly important to unplug for a while every year. And not just from electronics and phones and computers and TVs, but also from their well-meaning but often over-bearing mom. They learn that it won’t kill them to not report back to me on every high point and low point of their day, every kind deed, every “good thing.”

In sending my kids to camp, I make it abundantly clear what I value: real time spent outdoors, the social skills needed to make new friends, compassion, gratitude (compassion and gratitude are themes at GAC), and most importantly, their own autonomy.

I say all this, but of course deep down I wanted it to be easy for them. So when Fiona became so nervous as we dropped her off that she needed to lie down in the infirmary, I also became a nervous wreck. “She’ll be fine,” the camp nurse, Tigger, reassured me. “Now we need you to hop on that van – it is the last one headed back to the parking lot!”

I had become the lingering parent who wouldn’t leave and who was making the whole thing worse for her kid by trying to make it better. But who could fault me for not wanting to leave my kid IN THE INFIRMARY?! I justified to myself.

In the end, Fiona rallied, but not before she became so nervous she threw up, just minutes after I got on the bus back to the parking lot. She spent her first four hours at camp with the nurse, who french-braided her hair and gave her cold cloths for her forehead until she was feeling better. She looks back on that time and mostly remembers being bored; Tigger needed to be sure she didn’t have a flu or something, and so even once Fiona felt fine, she had to stay in the infirmary for a while.

I didn’t know until she got home that Fiona had thrown up (thank goodness I didn’t know that; who knows what I would have done if I knew). Once I got back to my car, two weeks of profound discomfort began for me.

I spent those two weeks obsessively checking the camp website for photos and my mailbox for postcards, looking for evidence that my girls were happy. I answered dozens of emails and comments on my blog, defending my decision to send my kids to camp, and to leave Fiona there in the infirmary, terrified.

After what seemed like two years, the kids came home on the GAC bus, wearing t-shirts that said, “Happy Camper.” And, in fact, that is what they were: so, so happy.

Two weeks of being unplugged helped them tune into nature in a way they don’t anywhere else. Though both reported missing home, they found comfort in knowing that they could cope with homesickness. They each tried dozens of new activities and sports, took on new challenges, and learned to accept their discomfort as a part of their growth.

Both kids made friends that they kept in touch with all year, and hope to return to GAC every year with “forever.”

Still, sending kids to camp is not for wimps. It requires a leap of faith that the difficulty (and, l’ll just say it, that the cost) will be worth it. It requires an ability to manage the emotional discomfort that comes with not-knowing, not-controlling, not-checking—it requires just trusting. But I’m comfortable with that discomfort.

If you have trouble getting food on the table, check out my Happiness on Autopilot online class for added incentive and support.

For more tools and strategies for motivating kids, check out my Raise Kids’ Emotional Intelligence.