How to Call in a Cheetah—Part 1 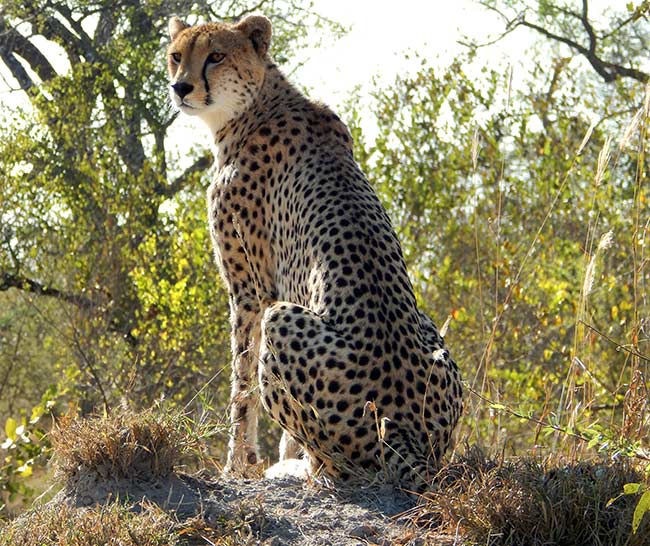 Before I left to go on Safari at Londolozi Game Reserve in South Africa as part of Martha Beck’s African STAR retreat, I kept joking about mystical cheetahs. Every time I’m with Martha, magic happens, so I was curious what mysteries would unfold in Africa. Would the cheetahs levitate? Would I have a run in with a psychic cheetah? Would a cheetah start speaking to me in tongues? It wasn’t just me who was envisioning cheetahs before the safari started. Anne Davin, who was joining me on safari, also kept seeing visions of cheetahs.

We didn’t realize when we were joking about cheetahs and seeing them in visions that cheetahs are not at all a common sight at Londolozi. Last year, Martha had emailed me to say that a cheetah had come up to her and said, “Mew.” I assumed stuff like this was common. Little did I know mewing cheetahs don’t appear every day at Londolozi.

Our sunrise game drive had been pretty quiet for the last couple hours. The bush was still, but we were satiated from the day before, when we had seen elephants, leopards, lions, giraffe, rhinos, hippos, and a whole bunch more. The morning of the cheetah was mostly about birds with wings like morpho butterflies, dwarf mongoose sentries, and communing with the strangler fig trees – not glamorous by African safari standards, but lovely and quiet and full of connection with nature. Kate, our park ranger and safari guide, stopped the Land Rover in the middle of a clearing. We drank coffee and laughed a lot. We weren’t thinking about cheetahs at all.

Back in the Land Rover, driving along a ridge, I started seeing visions of cheetahs, and just as the cheetah prowled through my mind, Kate started talking about cheetahs, something she hadn’t done so far. They are very rare at Londolozi – only two cheetahs inhabit the 6 million acres. Both are males, and because there are no females, they must leave their territory often to go mate with females outside Londolozi borders.

They’re hard to track because they rarely walk along the road, preferring, instead, to pace around inside the bush, where their tracks are harder to see. If we were to see one at all, she said, the cheetah would likely be spotted while sitting on a fallen log or on some other raised bed that makes the cheetah visible in the distance. Otherwise, they just camouflage into the grass. The small numbers of cheetahs and the difficulty of tracking them makes them a gem of a find for the few blessed to witness a cheetah in the wild.

As Kate spoke, I saw it again—a movie in my mind playing like I was at a drive in—a cheetah walking up onto the top of a mound.

That’s when our tracker, Shadraq, put his finger up into the air. Kate slammed on the brakes of the Land Rover. It was a cheetah track. My heart leapt. We followed the cheetah tracks along the road for a few hundred yards before the tracks left the road and exited into dense brush. Kate drove the Land Rover into the thicket, crashing over small trees and thorn bushes, blazing a trail as Shadraq directed the way with his pointed finger.

I wasn’t prepared for how my body responded when we almost ran right into the cheetah, sitting on the grass, looking at us with big golden eyes. My chest exploded, fireworks sparking. My belly was full, pregnant with stars. My heart skipped a beat. Warm honey flowed up and down my legs, landing in my right thigh. Her yellow eyes gazed right through me, just like the leopard did during my leopard initiation.

We were only feet away from the cheetah. We could almost touch the glorious cat, who didn’t seem the least bit bothered by us. If anything, the cheetah posed for our paparazzi photos. Excitedly, Kate said, “It’s a female! And look! She’s lactating! That means there are cheetah cubs!” Londolozi doesn’t have a female leopard. This was big thrilling news.

After showing off long enough for us to drink our fill of her sweet, flirty, coquettish cheetah energy, our cheetah got up and started ambling away slowly, deep into a thicket of trees, where even the Land Rover couldn’t follow her. I began to tear up as I watched her walk away, not from sadness that she was leaving but from the profound experience of AWE. I was awash with the glory of it all, the gift of that moment of connection with my true nature and hers, the feeling of Oneness, and the sense of magic affirming that she appeared as a gift, simply because it’s fun when humans and wild cats play together like magical children.

When I arrived at breakfast, I said to Martha, “I don’t know how to receive all this. It’s too much.” It felt like GRACE – unearned blessings – and a part of me didn’t feel worthy. I was overwhelmed at the power of co-creation, the overflowing feeling of abundance and unconditional love that comes with realizing we live as One in a Universe that wants to play, bringing our desires into being when they’re aligned with what wants to happen.

Calling In What You Desire

In retrospect, I realized that, without meaning to, those of us in the Land Rover did exactly what it takes to call in a cheetah. In Part 2 of this blog, I’ll share with you the steps Martha teaches for bringing into being what wants to become when it’s aligned with the highest good. If you can’t wait until then, read Martha’s instruction manual for the New Consciousness, Finding Your Way In A Wild New World. Until then…

Lissa Rankin, MD is a mind-body medicine physician, founder of the Whole Health Medicine Institute training program for physicians and other health care providers, and the New York Times bestselling author of Mind Over Medicine: Scientific Proof That You Can Heal Yourself. She is on a grassroots mission to heal health care, while empowering you to heal yourself. Lissa blogs at LissaRankin.com and also created two online communities—HealHealthCareNow.com and OwningPink.com. She is also the author of two other books, a professional artist, an amateur ski bum, and an avid hiker. Lissa lives in the San Francisco Bay area with her husband and daughter.