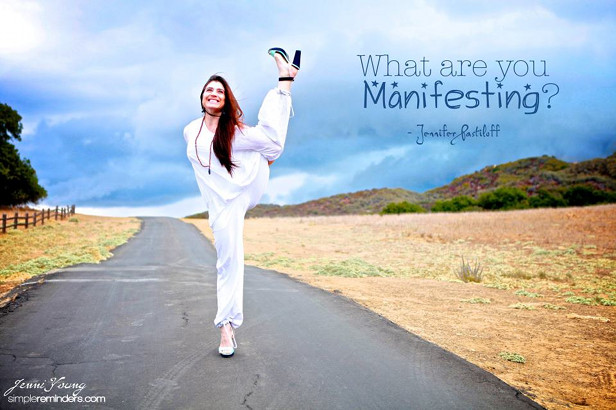 I teach workshops called Manifestation Workshops so you can bet your bottom dollar that I believe in asking for what you want.

For a long time, I couldn’t. This was for a number of reasons. One being I didn’t think I was worth it, and two, I didn’t know what I wanted.

I spent years trying to be an actress, and by “trying” I mean refilling ketchup bottles at a restaurant and hoping that someone would discover me (True story. I did.) I had friends in the business and people I waited on that were all willing to “help” me but here’s the catch: I didn’t really want it. So I’d whine and moan that no one really helped anyone and that everyone was full of it and woe is me, but the truth is that I didn’t go for it. I didn’t follow up. I didn’t show up. Which is to say, I was kind of a walking dead person. I had no idea what I needed to make myself come back to life.

I resented my situation in life as well as waitressing but I had no idea how to make a move in any direction so I let time pass until the years collected on top of each other like dirty plates and I was still pouring decaf coffees.

A couple things happened, well, many things happened, as I did work at the restaurant for thirteen years, but for brevity’s sake, let’s just say that I had a meltdown. Like in back of the building where everyone went out to smoke kind of meltdown. (Not me though, I didn’t smoke. I may drink wine but cigarettes never appealed to me. My dad smoked four packs a day up until the day he died. It kind of put me off.)

I had an epiphany, as my friend Elise Ballard, author of Epiphany and fellow Positively Positive contributor, would call it. At the time I didn’t call it an epiphany though. I slid down the wall and wept and felt sorry for myself.

How could I go on being so miserable? I lamented. There was only one answer: I couldn’t.

I had to make a move. Any move.

That’s the thing about being stuck. One tiny move is all you need at first. @JenPastiloff
(Click to Tweet!)

I made that tiny move and did a yoga teacher training. Then, I started to ask for what I wanted. I continue (mostly) to do that in my life.

Here are 6 things to remember about asking for what you want:

1) You have to know what you want. You can change your mind though. Isn’t that the part of the deal that we most often forget? I can wake up tomorrow and say, “I don’t want to teach yoga anymore.” I get to say that if I choose to. It’s my life. But then I have to start asking myself: Well, what do I want then? And then be willing to be with the answers. And the answer might be: I have no flipping clue what I want. Guess what? That’s okay. Keep asking. Keep looking. Ask for clarity.

2) I met this clothing designer last winter who told me that she sold these one of a kind pieces for thousands of dollars each. I asked her how she got to that place of being able to charge so much for her dresses. She put down her pad thai and looked at me, “Girl, I asked for it.” That’s right. Simple, huh? She asked for it. Like literally. Also this: she believed in herself.

3) You may ask for something and the answer may very well (and quite often is) a resounding NO. That’s okay. I ask for what I want a lot and I get met with a lot of no’s. But I also get a lot of yesses. The world keeps spinning. I keep asking. There’s an expression that goes something like: One bad day doesn’t make a bad life. So, it’s something like that. One no doesn’t mean a lifetime of no’s.

4) Getting told no does not mean you suck.

5) You are worth it. Tattoo that on your brain. Seriously. I am too. The world starts to respond when we believe that about ourselves. It doesn’t always look like we thought it would but shifts begin to take place when we start to realize and acknowledge our self-worth.

6) Being scared of asking for what we want is pretty much par for the course. Do it anyway. I think it is much scarier to be say, ninety years old, looking back and saying, I lived my life in fear. I wanted to write a book and I was too scared to ask for it, or whatever it was that we were afraid to ask for from life. My friend, author Gayle Brandeis says, “Fear is just an interesting sensation. You don’t need to give it more power than that.”

There’s an adage that says, You don’t ask – you don’t get. I try and live by that.

But, I am still human and still feel rejected when I get a no. But the feeling doesn’t last, as Gayle says, it’s a sensation, and it passes rather quickly these days. I take a few moments and then carry on because the truth is, if I stopped at every no, if I crumpled at every I don’t think so, Jen, I would be in a heap on the floor wailing that I didn’t want to go in to my waitressing shift. Once I got the courage to get up off the floor I realized that getting a no every once in a while was worth it. That having the self-worth and self-love to ask for what I wanted allowed me to get un-stuck.”

What do you want to ask for? Post below! Make sure to follow me on instagram at @jenpastiloff as I am doing a #beautyhunting Challenge there with giveaways! (Beauty Hunting is the name of my book and it is my mission to spread my beauty hunting movement!) See you Sep 27th in NYC, Dallas Nov 1 and then Miami Nov 8th, Pos Pos Tribe! Make sure and let me know that’s who you are so we can hug. xo jen

Jen will be leading a New Year’s Manifestation Retreat: On Being Human in Ojai, California. All retreats are a combo of yoga/writing and for ALL levels. Read this post to understand more. Check out jenniferpastiloff.com for all retreat listings and workshops to attend one in a city near you (Dallas, NYC, Seattle, Atlanta, Miami, South Dakota, Vancouver, Princeton are next). Jen is the guest speaker 3 times a year at Canyon Ranch and leads an annual retreat to Kripalu Center for Yoga & Health every February, as well as an annual invite only retreat to Tuscany. She is the founder of the popular The Manifest-Station website. Jen and author Lidia Yuknavitch will be leading a Writing + The Body Retreat Jan 31-Feb 1 as well Other Voices Querétaro with Gina Frangello, Emily Rapp, Stacy Berlein, and Rob Roberge in May . Follow Jen on Instagram and Twitter. You can also find her at BeautyHunting.com.