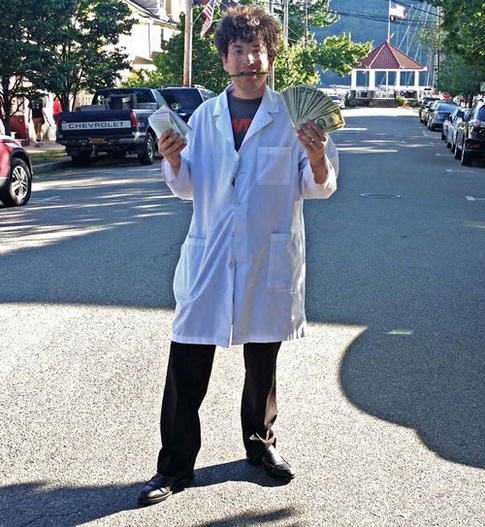 I’m going to be dead for about nine or ten TRILLION years. And only alive for the next forty or so.

It sounds like I’m trying to put things in perspective. But I’m not. It’s just true and even a little depressing.

I’ve never built a rocketship that will make it into space. I’ll never cure cancer. I might not even write a bestselling novel about a teenage girl that falls in love with a dominating billionaire.

Sometimes this makes me depressed. What will I do?

Someone on Quora asked “what can I learn in ten minutes that will be useful for the rest of my life.”

This I can do. I can show you four insanely stupid things that will make the rest of your life better.

I’m not going to give you the usual lifehack stuff. Sometimes they work and sometimes they don’t. Evernote, new ways to floss, a new way to clear your emails. This I can’t do.

I have 203,433 unread emails not counting my spam box. Not only will I never launch a rocket into space I will never even read all the emails addressed to me.

Even if you have every lifehack in the book, this is what it takes to be GREAT at something you love doing. Great enough to make a living or even wealth at it.

I’ve done enough interviews now on my podcast with people who are the best in the world at what they do and I can see there are no real shortcuts.

This is true no matter what field.

So instead, I’m going to tell you four dumb things I do that I have fun with and has made life A LOT smoother for me. I like to be calm, to laugh, to have fun with friends, to be creative, to wake up excited for what the day holds for me.

FOUR LIFEHACKS THAT WORK FOR ME:

I have thousands of $2 bills. I always tip with $2 bills. How come? Because then people remember me. They always say, “whoah! I’ve never had one.”

And then the next time I come into an establishment, I’m remembered. This is good for restaurants, dates, poker night with friends, even for paying at the local deli.

I also find whenever I move to a new town this is a quick way to make friends. I’m very shy and this gets people talking. This has been also very good on dates. Nobody ever forgets the guy with a roll of $2 bills.

I wear a doctor’s lab coat most of the time. Like in airports, restaurants, walking around town.

b. The big pockets let me put any electronic devices I might need (an ipad mini, for example, plus waiter’s pads) (see below)

c. People actually do treat me like a doctor. If someone said, “I need a doctor” I would not be able to help (unless it’s easy stuff in which case I can say, “I’m not a doctor” and then perform CPR or mouth-to-mouth or Heimlich, which are all easy to learn.

But the reality is, people move out of the way if you are in an airport and walking around in a doctor’s coat. And in a restaurant sometimes people let me go first.

Is this unfair? Well, I never claim to be a doctor. I’m just wearing a doctor’s coat because I like how it feels, looks, and the functionality of it. But if it has other benefits, which it does, I’ll take it.

Besides, 99.99% of the time someone goes to the doctor here is the correct answer the doctor should give: “Go home and sleep more. Call me in a year.”

I have about 300 waiter’s pads. I order them for about ten cents a pad in bulk on a restaurant supplies website.

a. I like to write ideas on pads. I write down at least ten ideas a day. The idea muscle is a muscle like any other. If it’s not exercised, it atrophies. If it’s exercised then within six months you’re an idea machine. Try it. It’s amazing what happens. Don’t keep track of the ideas. Just become an idea machine.

b. Why a pad? A screen messes with your dopamine levels. I like the visceral experience of putting pen to pad.

c. Why ten ideas? Four or five ideas on any theme is easy. It’s the final five or six that makes the brain sweat. This is how you exercise the idea muscle.

d. Why specifically a waiter’s pad?

i. It forces you to be concise. A waiter’s pad has small lines. You can’t write a novel there.

ii. It’s a great conversation piece in meetings. Once I pull out the waiter’s pad someone always says, “I’ll take fries with my burger” and everyone laughs. Again, I’m shy so it’s a good way for me to break the ice.

iii. In restaurants, when you pull out a waiter’s pad, guess what? Waiters treat you better.

iv. The other day in a cafe I was working and someone potentially violent came up and asked me for money. I held up my waiter’s pad and said, “I’m a waiter, do you want to order something?” and they sort of looked at me and grunted and then walked away.

I have a lot of inhibitions when I meet people. I’m scared and somewhat introverted. Standup comedians are the best public speakers in the world and I think they are the most astute social commentators on the human condition.

So the reasons I watch them before most social encounters (personal, professional, media):

It gives me material. I won’t steal from a comedian (yes I will). But the reality is: good artists plagiarize, great artists steal. And at the very least, I often improvise based on material I heard a comedian said. I’m not competing with them. I’m just on a date. Or a business meeting.

Studying the subtleties of how comedians get laughs: their timing, their voices, their silences, the way they look at the audience, the way they move across the stage, the way they benefit from the comedians who came before them, AND their actual commentary about life, helps me in my many interactions with people.

All of the above may make it seem like I’m a loser in many respects. I don’t deny this. Loser of what? Remember those nine trillion years?

Anyway, this is the four insanely stupid things that I wanted to share.