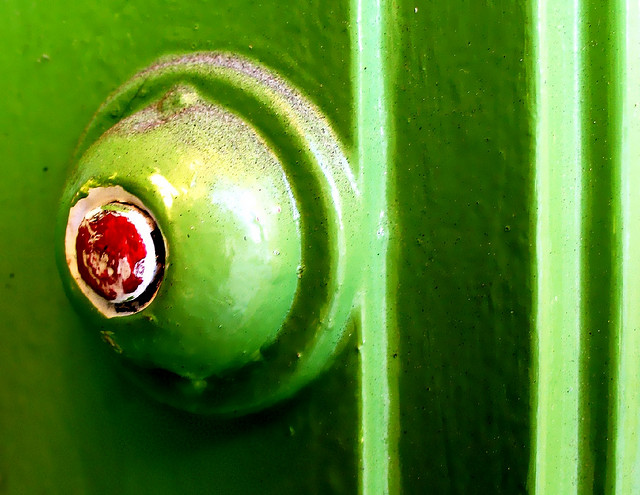 So then I rang her doorbell. She wasn’t in. Then I walked around the block. Maybe she’s in now. I rang the doorbell. Nobody came downstairs.

Then I covered my head and sat across the street with some homeless people. Maybe I would see her and another guy leave her house or, worse (since it was seven in the morning), enter her house.

Nothing. And I got cold. But maybe I missed her when I was covering myself.

So I walked back across the street and rang the doorbell. I heard some movement. Someone came down the stairs. The door opened!

Her sister (damn!), looking exhausted but beautiful in her dreadlocks and her cheekbones like her sister’s. She answered the door. “Oh, hi,” she said.

I asked if her sister was there. I said I was in the neighborhood. “Ugh, she left early.”

I started to walk towards the subway. That’s when I saw her. She was carrying shopping bags from the farmer’s market. “What are you doing here?” she said, “you look like you’re freezing.”

To be fair, she had a compassionate look on her face.

Also, to be fair, I was honest. “I thought maybe you were cheating on me.”

And then she took me to her apartment and cooked a good breakfast. While she was cooking the meal she left her computer on in the other room. “Can I check my email?” I said. She said, “yes.”

Instead, I checked HER email. It was her and her ex-boyfriend going back and forth in French. Nonstop emails all day long.

She served the meal.

One month later she had an abortion without telling anyone.

Nobody knows who the father is. Not even the father.

Someone asked me, “where do you draw the line between vulnerability and oversharing?”

What does “oversharing” mean?

I think vulnerability is good when you are trying to sell something or teach something.

As long as you are being authentic it helps you find common ground with the other person.

I’m not trying to sell something or teach anything. I’ve messed up a lot. I’ve ruined a lot of things.

I will say this: things got a lot better for me. And I always tell people, every six months things are completely different, that’s how much better they get.

I got a lot more calm. Happiness is a myth. When you win a bear at an amusement park you are happy for a few minutes, but then you want to win another bear. And then another.

Happiness gets metabolized by the body within a matter of minutes. One time I made a huge amount of money on a deal. Within a few hours I was depressed again. Within a few months I was suicidal.

My first goal when things were going crazy was to stabilize. I clearly did not know what was good for me. It was my absolute best thinking that had gotten me to the worst place. A bottomless pit where it seemed like there was only one way out.

And how could I trust anybody around me? Or any of my behaviors? Or any formula for success that I had been reading?

After all of that, here I was, on the floor, wondering “Why again!?”

There was absolutely nothing I could DO. DO-ing had caused everything to go wrong.

False relationships were driving me crazy. It’s hard to find someone who is good for you. But it’s easy to determine if someone is bad for you. If someone is funny, smart, beautiful, but always lies to you then they are obviously not good for you.

I was thinking, “but what if that is the only smart, funny, beautiful person? Then what?” Well, then move to China and there’s potential for at least one out of 500 million people of the appropriate sex for you. Don’t be stupid in your math.

I don’t really know what foods are good for me. Some say paleo. But yesterday someone told me carbs. But I do know that donuts are no good. Or too many potato chips. “But potatoes are vegetables?!” I try to argue. “Well, actually potato chips aren’t.”

I know that sitting in front of a TV all day is not good for me. Maybe do the opposite. Take a walk. Or read.

And I know that never being creative is a bad thing.

And I know that complaining has never helped me feel better. Complaining now is the best way to drain energy from some future “then.” I might need that energy!

Everything false will keep me in prison. Keep me ringing doorbells. Everything true will liberate me.

I don’t know what oversharing is. I just know what I do now. Every day I fly to the sky.