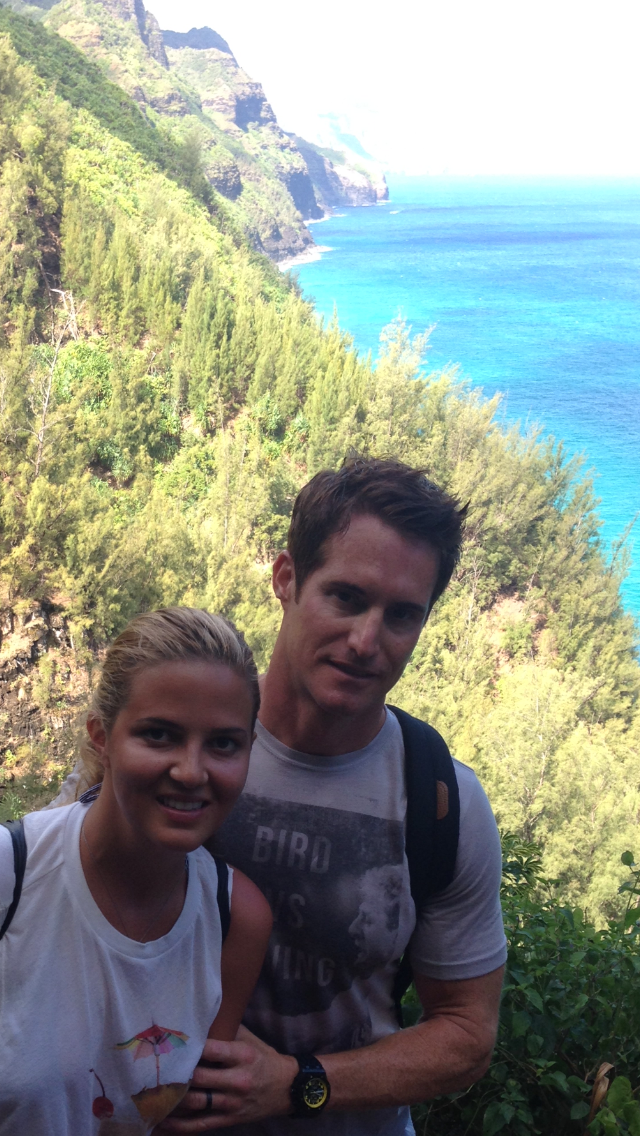 I had always had a strong desire to visit the island of Kauai as I was told as a child that it had magical powers. Growing up spending a chunk of my life on Maui, I felt a particular connection to all of the Hawaiian islands, which is why I decided to get married there on Maui, on July 1, 2014. Shortly after the wedding, my husband and I embarked on a honeymoon that would take us to almost all of the Hawaiian Islands so I could fall even more in love with that tiny island chain that always felt like “home” to me. When we arrived on the island of Kauai and got in the cab to take us to our hotel, I immediately asked the driver if he was from Kauai. To my delight, he was a native of Kauai, born and raised, and very familiar with the ancestry and folklore surrounding the island.

I told him that I had read about a certain waterfall on Kauai that was thought to be the birthplace of all of the Hawaiian Islands and he knew the one I was talking about, but said it would take two weeks to hike to it.

I told him I believed in the power of nature, and the fertile energy that must be surrounding the waterfall that is considered the birth place of anything, let alone an entire island chain, and he said that in his culture, the waterfalls are very sacred, especially for fertility, and the fact that I felt connected to that meant I had come to Kauai for a reason.

I told him I wanted to hike to a waterfall and immerse myself in the fertile energy as I knew I had wanted to start a family and he recommended a waterfall that would take about three-four hours each way but was definitely worth the day’s hike. He explained that this waterfall was an off shoot of the main one that created all of the Hawaiian islands so the energy and water flow would be the same.

Matt and I agreed we would hike to that waterfall on our third day in Kauai and in the meantime, our friends Eric and Julie Handler, who had been at our wedding, called to say they knew we were in Kauai and wanted to introduce us to their very good friends who lived there. They had a great property near a waterfall if we wanted to go have a swim in their private pool that they dug out of the waterfall runoff. Matt and I called their friends, Roberta and Gordon Haas, and explained to them that we were planning to hike this specific fall and they said that their property was right next to it so after the hike we should stop by and have a bite to eat since we will probably be exhausted from the arduous adventure we were undertaking.

The morning of July 19th, Matt and I set out for the fall and were completely dumbfounded at just how difficult it was. We were thoroughly unprepared and multiple times I complained that I didn’t know how much further I wanted to go since it was so incredibly challenging. At one point on the hike we were about 800 feet up and had to navigate a really narrow path covered in tree roots and sharp edges, and at another point we had to physically face the rock wall and use our finger tips to hold on while we tiptoed across a thin ledge with water coming down… I was terrified and angry and then relieved and happy over and over again.

We finally reached the fall after about three to five hours and needless to say, it was worth every second of fear and doubt and physical strain that we experienced. Water was coming down from over 200 feet up into an enormous pool that had the sun shining right on it, surrounded by vines and green moss everywhere. If it sounds too good to be true, it’s because it was. It was just that beautiful that standing at the base of it, you felt small and insignificant and yet connected and alive all at once.

It was nature as it should be, grand and wild, rendering me speechless and bringing tears to my eyes at the same time. @serenadyer (Click to Tweet!)

I told Matt that I wanted to meditate on a rock and just thank God and anyone else on the other side that loves me for bringing me to this place. I then remembered about the fertile energy and asked that if it was meant for me, if I could conceive a baby that was healthy and kind and connected to God in the way I felt right in that moment, and if I could be even more specific, I asked that she be a girl and be beautiful, intelligent, creative, compassionate and a lover of nature. I felt overwhelmingly peaceful, said thank you a thousand more times, and went into the freezing cold water.

After the hike, Matt and I made our way back to the ocean to rinse off before heading to Roberta and Gordon’s home. My kind and generous husband hiked the entire way with a candle and bottle of wine in his backpack that we had brought as gifts for our gracious hosts so we didn’t show up to their home empty handed! When we arrived, we were welcomed in by a petite and gentle couple, both in their 70’s, who had been living on Kauai for more than forty years. They had built a cathedral of a home in honor of the mountains and waterfalls that surrounded their space, and we sat down with them for a sandwich and conversation.

We talked about our wedding, my book, their beautiful island, and then Gordon told me in the 1970’s he had written a children’s book and asked if I wanted to start a family. I told him that I was actually hoping to start one soon and he looked at me very quietly and asked, “if you were to get pregnant today, with a baby girl, what would you name her?” I said that I wasn’t sure, but since I was little I have said if I have a girl I would name her Sailor so that is what I would probably stick with. He then went and grabbed a boxed set of his children’s books called “Courtney Flower,” opened the first page, and wrote “To Sailor… With Love From Courtney Flower” and signed “Gordon 7-19-2014.” I flipped open the middle of the children’s book to a page that said “meditation brings a miracle” and felt this odd sense that Gordon somehow knew I had meditated on the rock and asked for a baby at the waterfall, and when I looked up at him, he said to me “I think you are going to have a girl, and I think she is going to be conceived today.” We all laughed and had more beautiful conversation before taking a dip in their waterfall pool, and then we were on our way.

Fast forward a couple of weeks when Matt and I return from our honeymoon and are back in Florida and I realize I feel like I might be pregnant. I take a test at home and sure enough, there are two lines. We scheduled an appointment with my regular OB/GYN and when we get to the appointment, she confirms the heartbeat and takes a picture of this tiny little placenta with a beating heart inside and says that by this measurement we should be able to tell the conception date, which would give us the due date and let us know how far along we are.

We go into her office and she types in a bunch of numbers and says, ok, so based on the three measurements I took, all three are showing a conception date of July 19th, due in April…

I look at Matt dumbfounded and say that is the day that Gordon told me on Kauai that we were going to get pregnant with a girl and that is the day we went to the waterfall and I meditated and asked for a baby! We pulled out my iPhone to check the date on all the pictures we took and sure enough, it was July 19th. Then we got home and I opened the children’s book Roberta and Gordon had given us and it was signed July 19th. I then exclaimed that if the baby was a girl, we would definitely have to name her Sailor as it was all already agreed upon and he laughed and agreed.

Matt and I are excited to announce that in April our little girl Sailor will be born. We are sad to announce that last week, Gordon passed away. Somehow we know this gentle soul had a glimpse into our baby, before she was even created, and we like to think that maybe he waved to her as he crossed over to the space, just on the other side, where we will all one day return. Thank you Roberta and Gordon, for inviting us into your home, and becoming part of the miracle that is our baby girl, Sailor.

Serena Dyer is a south Florida native who loves travel, adventure and trying new things. Passionate about human rights, Serena recently completed her Master’s degree at the University of Miami, focusing on human trafficking. Serena is traveling the globe and blogging about it while also maintaining her hobbies of cooking, reading, working to combat human trafficking, and being with her 7 brothers and sisters! Serena has co-authored a book about growing up with spiritual parents with her father, Dr. Wayne Dyer, called “Don’t Die With Your Music Still In You” which will be released June of 2014. Serena lives in south Florida with her husband. You can follow Serena on Twitter.