When Life Hands You Lemons, Hand Them Back 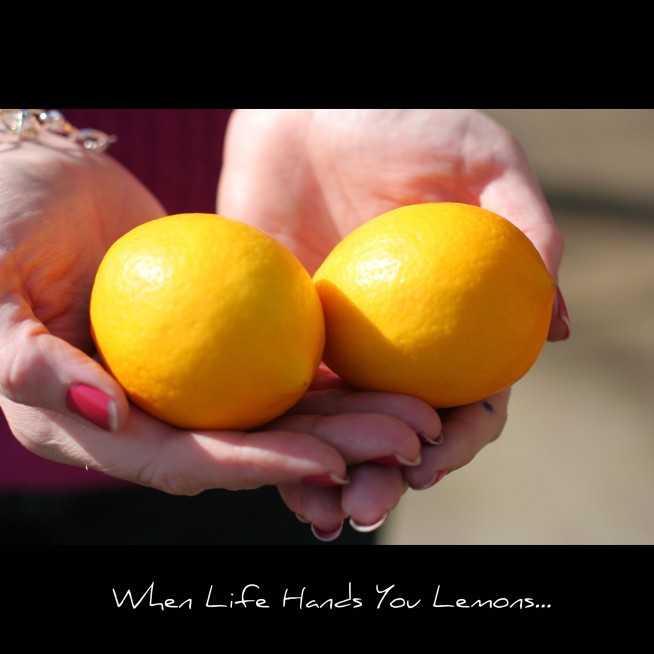 With the holiday season in full swing, one would imagine spending their evenings cuddling up in front of the television, watching holiday specials with their family. As the aroma of dark chocolate and melted marshmallows fills the air, the children are patiently waiting with coffee mugs in hand, in preparation for their share of the night’s homemade hot chocolate.

Unfortunately in today’s society, that doesn’t happen as often as it should.

Today, children have traded-in movie night for PS4 and XBox, and instead of parents making hot chocolate, they’re working overtime and praying for a holiday bonus, simply to have a little extra money put away for bills after the holidays.

But if your family is as traditional as mine, it’s easy to get overwhelmed around this time of year. Stores are always crowded, food markets never have what you’re looking for, and you can forget about getting home at a decent hour if you have to travel during 6pm rush hour.

As a child I loved the holiday season, but as an adult with two children of my own, I’ve simply learned how to get through it without succumbing to the madness.

For Thanksgiving this year, I decided to skip the hustle and bustle of the Big Apple, instead opting to travel back home to Baltimore to spend time with my family. Unfortunately, a few weeks prior, I found out that my father was dealing with a personal hardship and he really needed someone to confide in. That someone was me.

I’m known as the problem solver to my friends and family. I’m the Olivia Pope of my inner circle. However what makes this such a challenging experience for me, is the fact that my father and I have only started building a closer relationship within the past ten years or so.

While my mother was raising me as a single parent, he was battling his demons, many of which strained our relationship for most of my life.

I always knew who he was and would see him occasionally while my mother and I were riding around the old neighborhood. Periodically I’d spend about an hour or so with him when I’d tag along during weekend visits with my grandmother. Fact is, many of the memories I have about this man are so heartbreaking that I often wished I would develop convenient amnesia just so I wouldn’t have to remember it at all.

I can’t lie, it feels a bit awkward having him confide in me, especially knowing that he’s relying on me for support. It’s as if I’m the only person he has in his corner fighting along with him. But what makes this an even more interesting exchange, is the fact that I have every right not to give him the support he craves.

After what I’ve endured and all that I had to witness growing up due to his negligence and immaturity, I have every reason to walk away completely.

But I refuse to!

I love my father deeply, and despite the pain, anger and animosity I held toward him for over fifteen years, I refuse to relinquish my role of support. I will continue to be there for him purely, with no critiques or criticism, just strictly love.

I realized a long time ago that I’m his son by default, but I’m his supporter by choice, and I chose to continue supporting.

When I was about eight years old, our relationship came to an abrupt stop. I didn’t understand fully what was happening, but I knew it wasn’t enjoyable. I knew I didn’t like it. It was around holiday season when I noticed things starting to shift.

It was either 1990 or 1991 (I can’t recall the exact year) but I received a call from my father telling me that he was coming by to drop my Christmas gift off to me that night. When he arrived, he handed me a black First Down bubble coat, the exact one I wanted. I was elated. But I was unaware at the time that it would be the last gift I’d receive from him for the next fifteen years.

Looking back I finally realize, when I was eight years old life handed me a bucket filled with  lemons, and a note that said “Good Luck” attached. From that moment on, it was my responsibility to figure out what to do with them.

I carried those lemons with me everyday for the twenty-three years following, and every day that bucket became harder to carry. The more I learned, the more I experienced, the more I understood, the heavier it became.

The angrier I got, the harder it was for me to maintain my grip. My tears made the bucket slippery, and my frustration led me toward meaningless attempts to escape and flee the responsibility of carrying it.

Then, on the day my father called me and said to me “Quentin, I really need your support,” that was the day that I finally figured out what to do with those lemons — I handed them back.

Life will often place you in unfortunate positions to test your willingness to overcome. We’ve all been handed a bucket full of lemons at some point in our lives. You may still be carrying it today. Society wants us to “make lemonade”out of those lemons, but I don’t agree with that idea.

If I would have just accepted what life offered me and attempted to make the best out of it, I would’ve never worked so hard to establish a relationship with my father, years after his role and responsibility was past the statue of limitations. I didn’t necessarily need a father as a twenty-three year old man expecting my first child.

I was preparing to be a father, not searching for the one I wish I had.

It took me twenty-three years of carrying a burden that I never requested, to figure out that I didn’t have to accept it in the first place.

I understand that there are certain circumstances that are not within our control, however the acceptance and impact of those circumstances are.

Popular opinion and mainstream assumptions do not constitute authenticity.

Truth in its entirety is a matter of opinion, the same as happiness is a personal choice. No one can decide either for you, you make that distinction. We have to be relentless in our pursuit in order to obtain our utmost desires. We can not allow pessimistic thinking and simple-minded beliefs to distract us from our objective.

The court of public opinion has no jurisdiction in the respective happiness of its constituents.

So when life hands you lemons, don’t hesitate to hand them back. Your life is in your hands, therefore you dictate its outcome. We have the power of possibility within our grip, and need to use it accordingly.

Remember, Pain + Passion = Purpose. My suggestion to you, is to find yours!