How Support and Encouragement Can Determine the Course of a Life 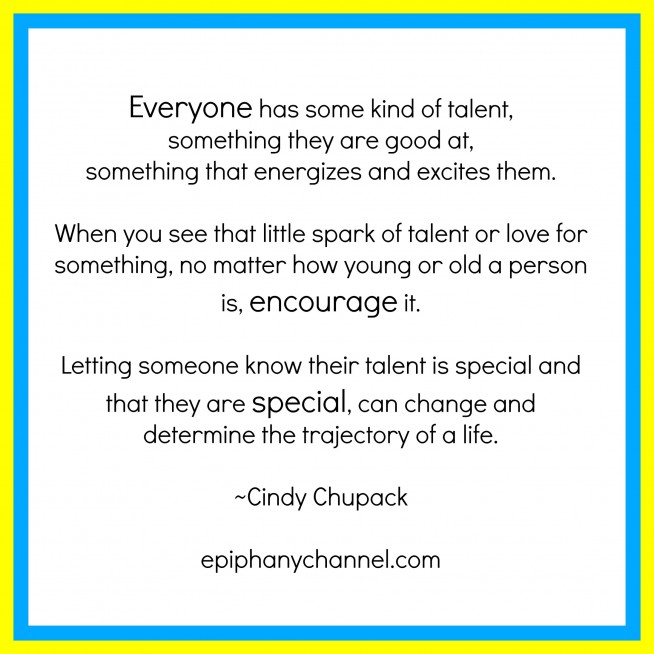 In my new paperback of “Epiphany,” I added a Preface that talks about the pattern I’ve seen in the large majority of the uber-successful people I’ve interviewed, which is that an adult – usually a parent, teacher or relative – supported and encouraged that person’s talent or love for something, most of the time as children but not always, and not in a suffocating way (i.e.: stage-parent/helicopter parent kind of way) but in a solid, grounded way. Most of these kinds of epiphanies can be found in the section of the book called CALLINGS. “Calling” is defined as: a strong inner urge toward a particular way of life or career; a vocation, profession, trade or life’s work.

I refer to these epiphanies as “callings,” because yes, these people have careers and jobs, but careers that are callings are more than that – they are part of of who the people are, part of their DNA, the very fabric of what constitutes their lives – their work and personal life are woven together and aren’t really separate.

I find that most of the time these people live lives of deep fulfillment because they have developed and are fully utilizing their gifts and talents and are energized by their work, which usually energizes their personal lives and their desire and ability to reach out to the world in even bigger ways. And in the cases I’m exploring, they are “called” to what they do by an epiphany.

The prolific, award-winning writer, Cindy Chupack, has different insights about her own journey of pursuing her calling and how important it is to encourage and support each other – especially when we see that spark of talent or love of something in someone, no matter how young or old they may be.

I met Cindy when she was the moderator for a panel of women television comedy writers for the Writers Guild Foundation and HUMANITAS in Los Angeles. (She is on the Board of Trustees for HUMANITAS and I am one of the judges for the HUMANITAS prize.) I knew of her because of Sex and the City and loved her first book, Between Boyfriends, but she’s one of those people who is even better and more full of light than you’d anticipated when you see her in action and meet her in person.

We met in her apartment that she uses as an office in Marina del Rey and talked for over an hour. She is the most prepared subject I’ve ever interviewed (Eight epiphanies written down! A record!) and our conversation ranged from epiphanies from childhood to career to Sex and the City, therapy, marriage, fertility, adoption, non-profits, Buck Henry (who, according to Mike Nichols, has never told the same anecdote twice), friends, her latest (hilarious and poignant, in my opinion) book and much more.

This conversation was so rich and fun, I couldn’t possibly put all the epiphanies in one post, but for now, here is one of her many epiphanies – this one is about her calling to be a writer, which happened at a very young age.

“Everyone has some kind of talent, something they are good at, or something that energizes them and excites them. When you see a little spark of talent and love for something, no matter how young a person is, encourage it. Letting someone know that their talent is special and they are special, can change and determine the trajectory of a life.” ~Cindy Chupack

When I was in the third grade, growing up in Tulsa, Oklahoma, I had a teacher, Mrs. Davis, who liked my poetry and one day she looked at me and said, “You are a writer.”  Not, “You are good at writing,” or “This is great writing, Cindy,” but “You ARE a writer.” The way she said it to me, and just using those words made all the difference in my life.

I was a young kid, I was one of the few Jewish kids in my school – I always had to explain Hanukkah to everyone and always felt like an oddball – and in that moment when she said that to me, something happened. There was something about being called a writer. I liked the sound of it, and it made me feel special. Ever since, my whole life has been a journey of figuring out what kind of a writer I am and what kind of things I like writing.

There have been plenty of lessons and pitfalls along the way. Probably one of the first was when my parents helped me submit to this book, World of Poetry, and my poem was accepted! But we had to pay to get the book and when it came, it was clear that it was a total scam — anybody who entered “won” and “got” to buy a book. Because of my moment with Mrs. Davis though, I still believed I might be a writer and kept at it, even if I wasn’t good at a certain kind of writing.

By ninth grade I was writing essays about my boyfriend breaking up with me. I remember, we passed these around in class, and one of his friends was in my class and told me he was moved by it. So even at that young age, I was exploiting my relationships for my writing and learned, “The pen is mightier than the sword. You may break up with me, but I may write about it!” (Cue “Sex and the City” music.)

Mrs. Davis still keeps in touch with my mom and I’ve seen her over the years. One time she brought a folder with poems of mine she had saved from third grade, this was after I had written on a few television shows, and said she still shows them to her classes sometimes. I was reading them and mumbled out loud, “These are dumb.” They were cute and rhymed but it was not like I was a genius or anything, and she was like, “You don’t understand…” and she just clutched them to her chest. She felt, even then, that I didn’t appreciate what I had, but she did. She knew when I was eight that I loved writing those poems – I truly enjoyed it. Now I realize that there is a poetic rhythm to my writing. I can hear what I want the sentences and paragraphs to sound like, and how I want them to build. There is a kind of poetry in my head that has been there since at least third grade, and, thanks to Mrs. Davis, I understand that now.

My epiphany is that everyone has some kind of talent, something they are good at, or something that energizes them and excites them.

When we see a little spark of that talent and love for something, no matter how young or old a person is, we can encourage it.

We can always let a person know that their talent is special and they are special. – Cindy Chupack
@eliseballard (Click to Tweet!)

And just doing that may end up determining the course of their life.

Today as a mom, as someone who has her child in school, and as someone who works with other writers, this epiphany really resonates with me not only because I realize how important it is to have someone spot your talent or something you love, and authentically and actively encourage it, but I feel like at every age we still have an insecure child in us who’s not quite sure what she’s doing. So in work situations, I’m always trying to be genuinely nurturing when I see good writing — it’s always important to be told, “You are a writer. You know what you are doing. This is a beautiful piece of work,” no matter how old or successful you are. I think it’s probably that way in any profession. Even Tom Brady probably needs encouragement every now and again!

Epiphanies are so inspiring and important for us all because they’re realizations about the big moments that helped make sense of your life, and they have ripple effects that are true for everyone, not just you.

Cindy Chupack is best known as an Emmy-winning TV writer/producer whose credits include Modern Family, Sex and the City, and Everybody Loves Raymond. Author of New York Times bestseller “The Between Boyfriends Book,” her new comic memoir about marriage “The Longest Date: Life as a Wife” was released by Viking  in January 2014 and just became available in paperback. www.CindyChupack.com

You can check out more of my interview with Cindy and her epiphanies HERE.

Elise Ballard is a writer, speaker, host and creator/producer of EpiphanyChannel.com and the author of the book, Epiphany: True Stories of Sudden Insight to Inspire, Encourage, and Transform, a heartfelt journey full of amazing stories of fascinating people, from world-renowned figures, thought leaders, and performers—such as Maya Angelou, Dr. Oz, Desmond Tutu, Deepak Chopra and Barry Manilow—to former inmates, leading psychologists, teachers, homemakers, and many more. To learn more about Elise and view her Epiphany video interviews, read related articles, share your epiphanies, and get information on speaking engagements and workshops, please visit EpiphanyChannel.com and follow her on Facebook and Twitter.