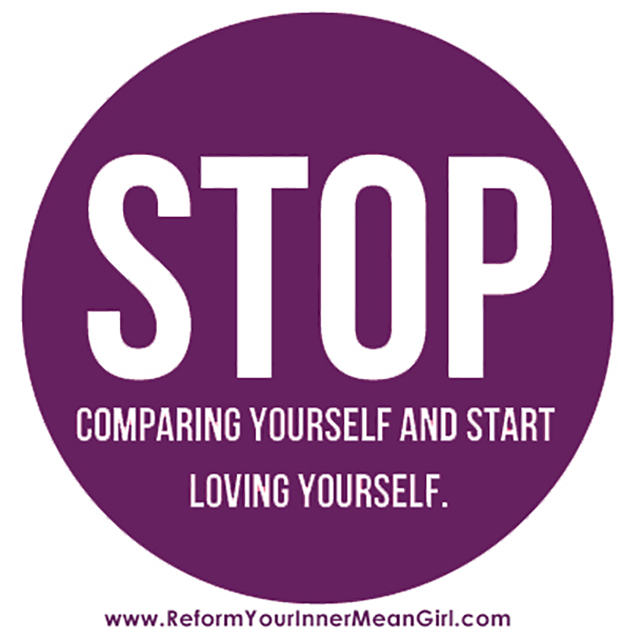 If I were to ask you to name a few bad habits, things you do that range from not being good for you to being downright destructive, you would likely name toxic habits like smoking, drinking too much, over eating, maybe even biting your finger nails or watching too much reality TV.

And while all of these habits are unsupportive or unhealthy, there is another bad habit that borders on toxic, if not downright abusive that most of us are afflicted by, but that we aren’t aware of or that we are just too embarrassed or ashamed to talk about.

This toxic habit is Comparison:

Comparing yourself is like consuming a green gallon of toxic poison – makes you feel like crap, poisons your view of yourself, and kills your spirit. It’s an instant happiness stealer. It makes you work way harder than you need to, because doing it makes you feel like you never have enough, do enough, or are good enough, because there is always someone better.

Comparison is a serious downer and derailer – but it’s everywhere. Inside of me, inside of you and even inside of our children (girls start comparing themselves as young as seven.)

So what do you do? How do we stop this sabotaging habit for ourselves and our kids?

This particular inner mean girl flared up first in high school, when I struggled in art class with a painting that try as I might I could not get right (which for a straight A student in all my other classes was not an experience I enjoyed! I was used to be the top student.) So Mean Patty took it upon herself to find the best student in the art class, Neil (imagine a pubescent Picasso who could make a napkin into fine art) to compare me to. That was the moment I decided (with her voice ringing in my head) that “I wasn’t good enough at art.” So instead of pursuing my dream of being a fashion designer or graphic artist, I chose to become a business major in college. And although I had been drawing since I was a little girl, I completely stopped doing any art for almost fifteen years. Mean Patty derailed me from my true passion of creativity, stole my confidence and cost me a lot of years of not doing what I loved. Instead of making art, I was making spreadsheets and power points (pretty ones, but so not the same!)

Luckily, when Mean Patty re-appeared in my mid thirties, two weeks after I received my first book publishing deal for Choosing ME Before WE, threatening to steal the success I had put my heart and soul into, I was much more prepared to deal with her.

Inner Mean Girls and Dudes often show up when we are stretching ourselves in new ways, just as I had with my painting and just like now I was with putting my first book into the world (they hate to feel vulnerable!)

So when this big achievement of the book deal happened, a manifestation of my return to my creative self, one that I had worked towards for over four years, working nights and weekends while holding my full time job, Mean Patty only let me celebrate for three weeks before rushing in with crazy, judgmental, comparison rants like, “Oprah has a couch, what do you have? Barbara (Walters) has interviewed famous people, you don’t know anyone! Who is going to put you on TV? You don’t even have a website!” Talk about never measuring up and stealing my joy!

I was feeling like a failure before I ever got started. And I wasn’t even able to enjoy the fact that I had reached this major milestone, because all I could see was what I didn’t have yet.

So I did something that at the time seemed kind of crazy, but was one of the smartest moves of my life – I sat down and had a talk with Mean Patty and decided that I was going to create a relationship with her. I sat down at my kitchen table, pulled out a chair, and told her that she was killing me, and that if she didn’t stop comparing me, she was going to ruin the book and all that we had worked for.

In that moment, as I created a relationship with this force inside of me, so I could be the observer of it rather than a victim to it.

And then I did something super smart. I gave her a new job. I realized I couldn’t kill this part of me, and that I could either let it keep sabotaging me or get it to support me. I decided that instead of tormenting me by finding women who were ‘greater’ that me, I could give Mean Patty a new job and use her skill for finding awesome women for good vs. evil. She would become my talent scout.

And that is when I realized the cure for comparison!

Instead of comparing ourselves to others people, we can use their greatness to inspire our own.

It was like this huge light bulb went off, where I realized that comparing ourselves to anyone else is actually insane, because there is no way we can be another person.I

Think about it. There is no way, scientifically or spiritually, that you could be someone else. Their life circumstances, their DNA, their destiny is one of kind, just like yours. So even if you got a complete physical makeover to look like that person, you couldn’t be them. Even if you copied exactly what they did, you could not replicate their path or success identically. It is literally impossible to be someone else, which makes comparing yourself not just a toxic habit but total insanity!

So given that I am a sane person – and you are too – once I realized that I hadn’t failed by not having or being what this other person was, because I could only truly be me, I became free to be inspired by them.

And here is how this can work for you too:

1. Realize that anytime you compare yourself to another, you are actually witnessing something inside of YOU that wants to be set free, express itself more, or be acknowledged (most of all by you!). Your Comparison Queen or King is just afraid of risks, progress, rejection, and your greatness which is why it does crazy things like get jealous, judge others, turn a friend’s great news into a reason to feel bad about yourself; measure you against people who have accomplished amazing feats or who are doing what you really want to do but haven’t done yet; make your good news seem like it’s not enough… but that’s all a smoke screen for your greatness. So next time you compare yourself notice that what you are seeing in someone else is also present inside of you.

2. Apply Inspiration ASAP. Reach out to this person and tell them how they inspire you. Remember a time you recently compared yourself to someone else – in addition to feeling crappy about yourself, notice it also made you feel isolated, separate and alone. Prime time for an Inner Mean Girl or Inner Mean Dude attack! Comparison creates disconnection. So next time you start comparing yourself, instead of disconnecting, I dare you to CONNECT… with the exact person you are comparing yourself to:

When you reach out in inspiration you are taking an act of self-love (by accepting yourself instead of comparing yourself) and an act of love (by opening your heart to connect with this other person, because who doesn’t appreciate being told that they are inspiring?)

If you start transforming your comparison into inspiration, I promise you miracles will start to happen for you. Shortly after I reformed Mean Patty into her new job, I reached out to a woman who was doing a big event that I had always wanted to do, and told her that she inspired me. She emailed me back, we met for lunch and a hike, and now five years later, we are about to release a book we co-authored together. You just never know what is possible when you choose love over fear. I dare you to try!

Christine Arylo, m.b.a., is an inspirational catalyst, transformational teacher and best-selling self-love author who teaches people how to put their most important partnership first, the one with themselves, so that they can create the life their souls crave. The popular author of the go-to book on relationships Choosing ME before WE and the self-love handbook, Madly in Love with ME, the Daring Adventure to Becoming Your Own Best Friend, and her newest Reform Your Inner Mean Girl. She’s affectionately known as the “Queen of Self-Love” for her groundbreaking work in self-love, including founding the international day of self-love on Feb 13th. Arylo is the co-founder of the self-love and empowerment school for women, Inner Mean Girl Reform School.  You can follow here on Twitter, FB or visit her sites here & here.