The Ten Commandments of NO 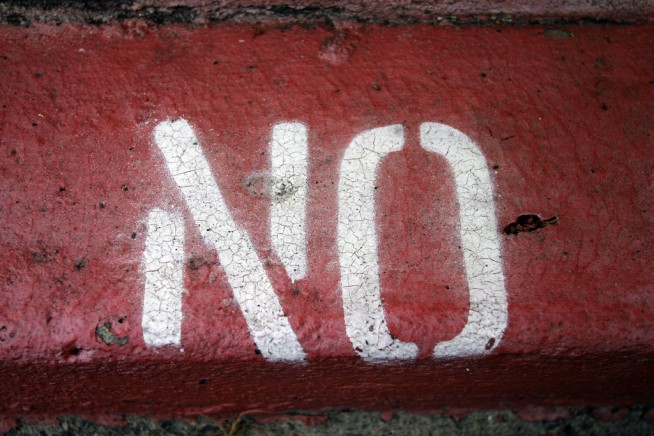 Every time you say “No” an angel gets its wings.

I was talking to an angel recently who told me this. He begged me to say “no” more often. More angels need wings, he said.

Not only does an angel get wings, but you double your own lifespan.

Unfortunately I said “Yes” to binge-watching “House of Cards.”

Addition. Subtraction. “No” is the math of life.

“What if a lot of money is involved? “

A friend of mine makes a good salary, but he hated what he did for a living. So he negotiated TRIPLE the salary.

He has three houses, a boat, all sorts of luxuries. Now he has triple the salary.

But he got triple the salary.

He was me. But I started saying “No.”

COMMANDMENT #3 – THE SPOUSE NO

“What if you need to show support for your spouse?”

The other day Claudia didn’t go to a dinner I really wanted her to go to. At first I was upset.

I was early, so I was wandering around the parking lot having this imaginary argument in my head. “SHE NEEDS TO KNOW THAT…”

Which is to say: I was angry.

Which is to say: There was going to be some punishment.

What I’m trying to say is: Claudia being happy is what should’ve been my concern. Happy wife. Happy life.

Then I had a great time. A fantastic time. I made new friends. Claudia will one day meet them.

Then two weeks later one of the guys at the dinner stole millions of dollars from a company he is involved in and is now probably going to go to jail.

Claudia is always a better judge of character than me. I need to learn her secrets. I’ll share them with you once I learn. Don’t tell her I said that.

There’s a magic order of “No.” Here’s the order:

So I had to love and trust her and not do something fake. Then the best thing happens.

“What if you don’t want to hurt someone’s feelings?”

Tough. You’re a big baby. It’s none of your business what someone else’s feelings are.

COMMANDMENT #5 – THE NO THAT DAMAGES

“What if you don’t want to hurt someone’s feelings?”

Tough. You’re a big baby. It’s none of your business what someone else’s feelings are.

“What if I damage a relationship permanently?”

Then it wasn’t a real relationship or friendship to begin with.

I didn’t go to a vacation in Hawaii once. I was going through a divorce. I was losing money. I was hating myself. I didn’t want to go to Hawaii.

Now the couple won’t speak to me. They had been good friends for five years. I haven’t spoken to them since and they (HORRORS!) unfriended me from Facebook.

Real relationships are at the Love and Trust level. Not the Oblgation and Fake level.

“What if what they are doing is bad?”

Someone shows me their business plan. It’s no good. It’s awful. It’s the worst I’ve ever seen.

Saying “No” does no good. They will ignore you and just keep ruining their life. Saying “Yes” is even worse.

It puts them into a dream world that will turn into a nightmare.

“Yes, she’s great. Maybe I would love her also. But she’s married so you have to consider that.”

YES, then CONSTRUCTIVE CRITICISM, then let the MARKET say No for you.

COMMANDMENT #7 – WHAT IF YOU ARE WRONG?

I said ‘No’ to investing in a company in their seed round and the company is now worth over two billion dollars.

I said ‘No’ to taking what might’ve been the funnest job of my life because I didn’t want to leave my girlfriend at the time.

I say No and I’m wrong all the time. Ugh, how many times have I said it and I was wrong wrong WRONG.

I’m still thinking of all the “Nos.” Like Applied Semantics which became worth over a billion after Google bought it (it’s now called “Adsense”).

Or the No to the girl I loved. I sent her “No” by text and she still reminds me of it. How low I was.

I mess up a lot. It’s hard to be initiated into the Secret Society of No.

I’m sorry. You know who you are.

At the every least I learned. “No” is a tool. You have to sharpen it.

When you sharpen it correctly, you add years to your life (avoiding all of the obligation events that added up, add up to about 1/3 of your life).

When you sharpen it correctly, you gain courage and strength to be honest.

When you sharpen it correctly, you get the greatest gift of all (not the angel wings, sorry) – you learn when to say “yes”.

Saying No at the wrong times means you are flying through the air, above everyone else.

As soon as you are pushed out into the world there’s the straight line path: School – college – job – promotions – spouse – family – luxuries – life – death.

This is a fake path.

I finally said “No” somewhere between “college” and “job,” but then I had to say “no” later also. Again and again.

Why start later when you can start now.

Practice today. Say “No” to something small. Something that gets you back three minutes of life.

Something gets you back three minutes of love or friendship.

Something that gets you back two minutes of creativity.

You can build a time machine with an extra 500 hours.

COMMANDMENT #9 – YOU WILL DISGUST PEOPLE WITH YOUR NO

He said he never got more hate mail than when he wrote that. People thought he was disgusting.

The only thing he said “No” to was twenty-eight minutes of being underwater.

Now he swims in the ocean outside of his house when he wants to get wet.

Last night I was talking to a girl who interviewed many successful people for her upcoming book.

I asked her how many times she was rejected when she asked people to be interviewed for her book.

She said about one in three got interviewed by her. BUT, she said, ALL of them rejected her at first.

What’s the secret, I said. Because I thought the ratio would be more like twenty to one.

She said, “Never listen a NO from someone who doesn’t have the power to say YES.”

I told her, “That’s really great.”

I said, “I’m going to plagiarize that line.”

She laughed. She said, “give me credit.”