Do You Need to Hear “I Believe in You” More Often? 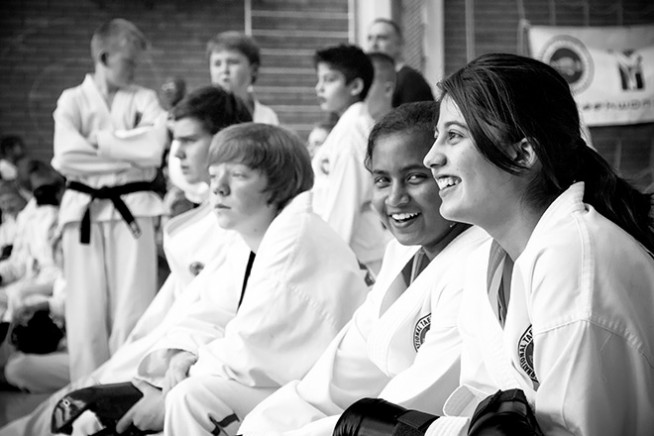 As as a child, my parents took me to ballet dance lessons. I loved it! Moving, performing, it was a thrill.

Then, as the girls in the class grew up and approached the age of eleven, they stopped going to ballet dance. As much as I loved it, I decided to stop going too…

That’s when I discovered martial arts.

I still remember it clearly. I was wearing a white Taekwondo uniform and getting ready to appear in front of an intimidating board of black belts. It was my first belt test, and I was as nervous as could be.

I was a shy and scrawny girl and I wasn’t sure what I had gotten myself into. This was so different from dancing in front of proud parents in the audience!

My instructor was different from the other black belts. Where the master instructor was in his late fifties with a deep voice and an aggressive tone… she was more like me. She was petite and she smiled a lot, but she wasn’t afraid of busting a move or working hard.

My palms were sweaty, and I must have gone to the bathroom five times before the test got underway.

I went out on that gym floor, did my patterns, showed my burgeoning self-defense skills, and smiled nervously.

That day at eleven years of age, I passed my belt test and got a picture taken with the intimidating master instructor.

This marked the beginning of a new journey.

I had found a tribe of people (martial artists) who would support me, push me when I needed to be pushed, and who really believed in me.

Fast forward to a few years later, after I had put in thousands of hours of dedication to my craft. I warmed up, practiced my patterns, sparred with my team mates, and learned the power of commitment.

Throughout the years, there were countless Taekwondo competitions, plenty of belt tests, and even performances.

Many people joined the ranks of our school, some left, and others kept going.

One of the other students who had tested with me as a white belt stayed the course. Together we both became better martial artists, better people, and good friends.

Slowly but surely, I was moving away from that scrawny, shy, and easily intimidated girl that I used to be. I worked alongside my instructor, and even grew to be taller than her. She could still kick my butt, and was much faster than me!

Finally, at age sixteen, the day came for another significant event in a martial artist’s life. It was the much anticipated black belt exam.

Even though I didn’t feel like the child that would cry at the drop of a harsh word anymore, I was still nervous getting up in front of that board of black belt instructors.

But I had been working toward this for years, and I knew that this black belt was mine.

The exam was intense. I was sweating, out of breath, and feeling the pressure. My comrade was winded too, but we had both stuck it out over the years through the grueling lessons, practices, and tests.

Finally, when the testing portion wrapped up, and it was time to award us our black belts, the master instructor said something that I’ll never forget.

He said: “Nathalie, I didn’t think you were going to make it this far. You were so small and quiet, and I thought for sure you’d quit.”

If I thought I was winded before, I was surprised when the wind got knocked out of me at his words.

On the one hand, I could see where he was coming from. It would have been easy to assume I wouldn’t make it. But thanks to the support of my instructor, who believed in me and saw something I couldn’t see for myself, I made it through. My parents were always encouraging and cheered me on, not to mention that they made sure I was at practice every time.

And thanks to my fellow students, I was bolstered and felt accepted by a group of people like I had never experienced before.

So when I swallowed hard to keep myself from tears, I knew that it really meant something that I had stuck it out. I also knew that had this master instructor told me I wouldn’t make it when I was eleven, I would have been hurt, but I would have used that as fuel to do even better and become even stronger.

Now, whenever I think of his words:

Only you know what’s possible for you, and it’s your commitment to making it happen that really makes a difference in your results!

Nathalie Lussier is an award winning digital strategist and co-founder of AmbitionAlly. She’s also the creator of the wildly popular and free 30 Day List Building Challenge. You can find more info on her website or follow her on FB or Twitter.