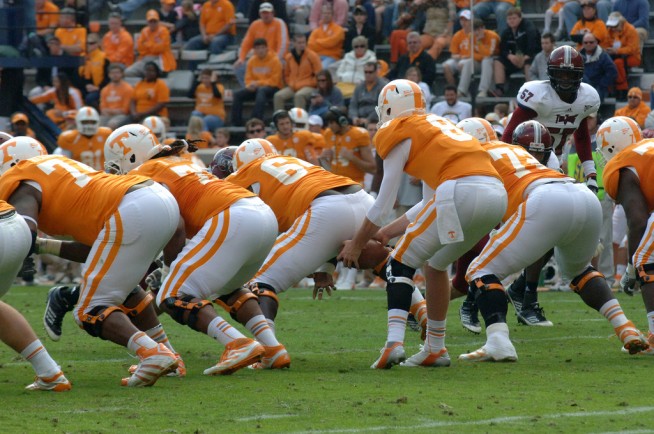 “Give others all that is alive in us—our interest, understanding, our knowledge, our humor, everything in us that’s good. In doing so, we enhance the sense of aliveness in others while enhancing our own. When we give, we get a ‘heightened vitality’ of what it means to be human.” –Erich Fromm

I grew up with a dad who loves football. The sound of a NFL commentator’s voice underneath my dad’s loud celebratory hoots, or frustrated cursing, feels as familiar as the rain feels wet. It used to bewilder me as a kid how someone could yell with such passion at a television set. How could someone be so emotionally tied to these people in a box? Why has my calm and collected father taken this obscure turn towards Looney Toon Land? Should I follow him or just keep staring at him with a cocked head?

As confused as I still was – monkey see, monkey do – eventually I became a passionate Broncos fan. My first game at Mile High Stadium, when I was around ten years old, fueled the fire of my newfound fandom. The energy was so vibrant and alive. Strangers were high-fiving and hugging each other. The ground was shaking with the stomping feet of over 60,000 people creating a massive and spontaneous symphony of thunderous cheering. I still didn’t understand all the rules of football, but I knew I liked the feel of the energy it gave to a crowd – a sense of exhilarated unity. No matter who we were outside of that stadium, we were all on the same team that day. It was a beautiful, contagious energy, and I fell in love.

Eventually, I learned to love the way I could so easily relate this ball game to the game of life.

I don’t even remember which game I was watching, but I heard the commentator say something along these lines…

“What makes a quarterback so strong is his ability to see the big picture. To look at the game instead of the play and use that information to lead his team forward, down the field, towards the goal.”

So I thought: if we’re all the ‘quarterbacks’ of our own lives, it’s not only important to generate a playbook and execute each play to the best of our ability, but also to be able to generate a bird’s eye view of the game we’re in, and use strategy to guide our decision-making.

How do we generate this bird’s eye view? We go to higher ground.

I can say from experience that:

When I was in college a group of us spent a week staying in the volunteer apartments of a homeless rehabilitation center in New Mexico. The people within the program would attend onsite AA classes as well as job-interview classes to get back on their feet. When they graduated the program they had the option to go out into the world and find work, or to stay in one of the on-site houses and work at the shelter if a position was open. We couldn’t have been more blessed to work within the walls of such a life-saving place.

During the week we were there, we worked in the kitchen serving food, we helped fix up the on-site houses, we helped organize donated food and clothes, we took packed lunches out in a food truck to give to the homeless people on the streets of Albuquerque, and we spent time getting to know the people in the program.

One of the more memorable encounters was with a man in his late 70’s. He resembled an old Bob Dylan with a dark, sun-tanned face – wrinkled and raw. He approached me with notebook paper sprinkled with the most perfect, font-like cursive with words to a poem. He went on to say that he used to be a very passionate musician before he fell into drug addiction. He used to write songs all the time but hadn’t in a very long time. He said he was watching me the other day and I inspired him to write one again. It was such a beautiful poem I was almost in tears. He thanked me for my simple presence and for smiling all the time. And, that’s when I was in actual tears.

This experience alone along with the events of the whole week were sobering, grounding, emotional, and incredibly appreciated for these basic reasons:

The work broke routine and humbled our spirits.

Breaking routine with manual labor turned out to be a great meditative process. Like running or washing dishes, it lets the mind settle and focus on working through whatever strains it might be holding. Also, being part of a team with a common goal for good makes any kind of work feel worthy and proud.

Conversing with a room of felons, recovering drug addicts, and homeless people was not something we were accustomed to doing. How would our worlds collide? Some people were crazy. One lady told me of her days as a queen in another land. Others were ashamed and embarrassed to expose what had landed them in the shelter. Many were open and excited to share their story. But for the most part, people were grateful that we were there treating them like we would any other human being. I was grateful to have learned so much from such an unexpected place. Most importantly to have realized that I wasn’t better than anybody in there.

The stories of the people shattered previous prejudices towards homelessness and drug addiction.

The stories of these individuals were such a gift. They were stories of struggle that came with resilience and hope. They came with failure and the process of resurfacing the will to stand back up. They came with the fight through temptations and the strength to resist them. And they came with the joy of having somebody to tell their story to. I was reminded to see the good in people and to always encourage that good to be extracted. They fueled my compassion, empathy, and urge to be a part of a solution.

The whole experience gave us all a heightened sense of gratitude towards our own lives.

The kitchen manager at the shelter used to be homeless. He went through the program and now organizes all food donations and meal prep. Before we left our week there, he thanked us all for coming and told us: “I hope you guys go home and hug your mothers and fathers for making you do your homework every night and disciplining you to work hard, because it matters more than you think”

When I got home that’s exactly what I did. I had a newfound appreciation for everything in my life, and trivial matters that felt so heavy before all of a sudden felt frivolous and silly. Complaining felt like such a crime, and my world expanded. As cheesy as it sounds, I wanted to buy my mom flowers as often as I could. I wanted to have a cold beer and conversation with my dad more than I wanted to fade into the next weekend’s college party. My perspective was renewed and things made sense.

Though, as it’s said, motivation doesn’t last. We need to rejuvenate it periodically. We need to remind ourselves of the bigger picture as often we can and put an extreme importance on it.

Serving others is not to look good on a resume, not to gain applause from our friends, and not to fit into a seasonal fad. It’s something that should be done on a regular basis to remind us of the bird’s eye view of our world and gain an enlightened perspective to guide our actions.

Catrina Linhard is a Colorado native, skiing enthusiast, traveler, and content producer at Shout.gd – a mobile app based around character development. She is on a mission to simplify the complex and maximize human potential. She loves Jeeps, craft beer, and serendipity. You can follow Catrina on Twitter.