Everything is Medicine: The Warrior – Monk 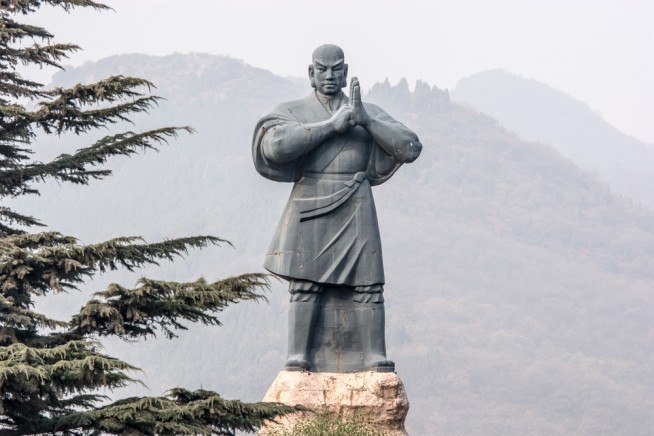 I’ve been dancing with a Zen koan for the last few weeks — something John Tarrant once taught me. It goes, “Medicine and Sickness are in accord. The whole world is medicine. What am I?” It’s been a slow, methodical and, at times, difficult dance … like dancing the tango while wearing a heavy backpack. At times I lean into to the koan and at times it leans on me – the yin and the yang…

It’s been a wild adventure just to arrive here, to be pondering a koan (or even know what one is) and to be asking the question “What am I?” in the first place.

I grew up poor with my single mom in a trailer in the Arizona desert. I wanted to live the dream, and I did; I worked my way up to overseeing 20,000 concerts a year around the globe as head of the concert division for Live Nation, the world’s largest concert promoter. (If you’ve been to a big concert, chances are it was one of ours.) I had a great boss, was named to Fortune Magazine’s list of top paid executives under forty, and worked with some of the biggest stars in the world. See what I mean … what more could you want?

But I did want more. Everything I thought I was, my identity as the brave business warrior, was tied up in the tenuous bow of my career, possessions and power. To feel good about myself, I always needed more and with the more came its companions in the form of the ever increasing pressure, stress and friction I was experiencing. And then it burst.

The rocket ship I’d ridden to the top came crashing down just as dramatically as it had risen. In a matter of months, my mom died from stomach cancer, I endured my second divorce and I lost my job.

I looked around in a daze and found my dream in shambles. Everything that had seemed real to me – my mom, my wife, my career — was gone and I grasped around in the dark looking for something to hang on to … searching for an identity beyond the warrior who had somehow managed to win all the battles and yet still felt lost.

A few months later, still searching, I traveled to the Shaolin Temple in China with a new friend I’d met at a wellness conference, the herbal master Ron Teeguarden. Together we climbed the one thousand steep mountain steps that led to the cave that Bodhidharma is said to have meditated in for nine years before establishing what is now Zen Buddhism. I liked Bodhidharma. He was scrappy, fierce, a barbarian, a stranger in town, who was also a saint. He walked from India to China and converted a monastery full of overweight monks into the home of the seemingly odd mix of Zen and Kung Fu. This story resonated with me as I struggled to unite my own odd mix of the business warrior and the peaceful monk who was slowly emerging inside me. What I found, through the teachings of these descendants of the teachings of Bodhidharma, was that I couldn’t find peace; I had to learn instead to be at peace with what I found in me … both the warrior and monk inside.

I couldn’t find peace; I had to learn instead to be at peace with what I found in me.
@Thejasongarner (Click to Tweet!)

I remember the moment it all sunk in for me. I asked one of the monks how he reconciled his peaceful nature in the midst of Kung Fu battles. “When I was little all I wanted to do was fight. My punches were stronger, my technique was better and I always won. Then one day I met a superior opponent who beat me, badly. For the first time I understood what it felt like to lose, to be in pain and to doubt my ability. That day I gained a true understanding of compassion. Now I try to solve problems with my heart instead of my fists. I am a monk and I am also a warrior. I use them both in life. Compassion is my guide.”

His explanation made sense to me. The peace I was searching for wouldn’t come as the result of denying my warrior nature. Instead it was about embracing the entirety of my being, both the warrior and monk, and learning to apply them both compassionately in my life. I could fully engage in life while fully embracing my spirituality, and as a result experience peace.

“Medicine and Sickness are in accord.
The whole world is medicine.
What am I?”

I think another take on the koan might be: Monk nature and warrior spirit are in accord. We are all both. What am I? It’s easy to think that our monk nature is the medicine and our warrior spirit, with all its battling and conquering, is the sickness and to run away from it all to meditate in the solitude of the mountains. But the koan doesn’t let us off that easy. It calls me back from the meditation cushion to my home, my kids, my office — with the assertion that monks and warriors are in cahoots.

And there’s the bold proclamation that everything is, in fact, part of one unified life — that it’s all medicine.

Over the last five years, I’ve found more of the peace that eluded me for most of my life. Some might say I’ve found a way to insert my practice into my life as I share my experiences through my book, blog and conversations with others. But I think it’s more accurate to say that I’m discovering my life through my practice, as the ins and outs of my real-life spirituality fueled by every day events become my practice and the fodder for my sharing. As Sharon Salzberg said to me once, “With awareness our whole life becomes our practice.”

I have an old business associate I used to work tirelessly, but without notable effect, to impress. I got a note from him the other day after he read my book. He said simply, “Thank you for sharing what so many of us are silently feeling.” After years of warrior-like hard work, what had finally garnered his admiration was an act of honest sharing from a vulnerable heart. And the koan smiled knowingly at me … everything is medicine.

This week I invite you to get in touch with both the warrior and monk natures inside you. Embrace the parts of your life you may have viewed as hurdles and trace their lines through your life and find the medicine hidden in them. Experience the same honor in the scrappy and unrefined parts of your being as you do in the accomplished and holy parts. And view your life as an adventure in real-life spirituality by finding the practice weaved throughout your everyday experiences. In us all live a warrior and monk – everything is medicine.