We Are the Stories We Tell Ourselves 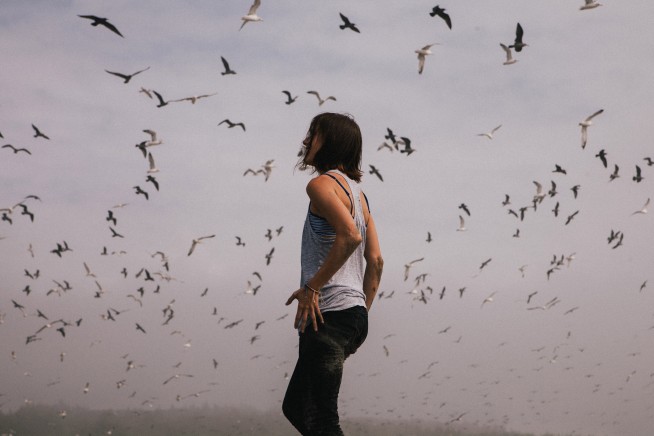 Growing up in an Eastern European country, I learned to believe that I had it more difficult than others from the Western World.

I still clearly remember the picture I had to describe during my German language exam. It was a hand drawn picture, one half showed runners lined up on the start, all wearing fancy running shoes. The other half pictured a runner who was barefoot, and locked up in the locker room-room.

I always identified with the locked up bare foot runner. I was the one who had it much more difficult.

Believing this story didn’t help me in any way

Guess what, nobody was interested in that story that I didn’t had the same opportunities. Complaining about that we could not travel freely, that we didn’t have nice clothes, that we couldn’t consume certain movies or books did not create any sympathy. And nobody understood how it felt to be spied on and reported for going to church. None of my friends knew what it was like to be told by my parents that I am not allowed to speak of certain things in public, for fear of getting in trouble with the communist party.

Telling the story that I didn’t have the same opportunities, resulted in self pity … And even worse, I began to make that story my identity. I used it as an excuse to tell, when I was not measuring up.

As Oprah says, “I know for sure that what we dwell on is who we become.”

I repeated that story so often in my head, I saw the pictures of my childhood so vividly that I believed in them 100%. It became my reality. I firmly believed that I didn’t have the same access to education as children from the Western world. I disregarded everything what would put that belief in question and amplified other things what were confirming it.

It became a default programme stored in my subconscious mind and played out each time my “less than” button was pushed.

When I was told by a colleague that my French spelling was bad, I exploded. “Of course it’s bad! If I’d had the opportunity to learn it as a child, as you did, then I would be just as good as you!” I had my excuse for not improving it.

Dwelling in the past and crying over supposedly lost opportunities takes away our ability of being present now and seeing new possibilities. We should tell ourselves better stories

So what would be the way out? – you might ask. Let’s explore the answer.

You see, it was so easy to be caught up by that story that I didn’t have the same opportunities as a child. In certain aspects it may have been true. But reality was much more complex. As I wrote earlier, I disregarded many things just to keep my story alive.

When I got a scholarship to study in Germany I started to notice things which questioned my story. I noticed that German students did not speak more languages than I did. When I asked them why, they told me that they’d had the opportunity to learn, it was not a priority for their parents.

I was working in Belgium when I met my first American friend. I was shocked to hear that she had student debt. In Eastern Europe, higher education was free at the time. Although admission to university was highly competitive, it was accessible for everybody irrespective of the financial situation of the family. It seemed I’d had more opportunities than I’d realized – or cared to believe.

My story started to crumble. I began to see reality in its complexity. And more importantly I began to see how believing in a negative story could affect me.

I realised that it was no longer the iron curtain which held me captured. It was my own mind. Fifteen years after the fall of the Berlin Wall I decided to rewrite my story. I decided to finally be free.

Do you have stories about yourself which are disempowering? Maybe you come from a poor family and blame that fact for not being successful. Or your story might be about the color of your skin, or your origin.

Are you ready to leave that story behind to become free and consciously shape your future?

So how can we rewrite those dis-empowering stories running in our head? How can we rewire our mind?

If you are still with me, and have the deep desire to become free, then here is what you can do.

Ask yourself the following questions:

1. “What’s my story that I am telling myself? That I am perpetuating? What if the opposite of my story were true?”

Take some quiet time to reflect upon those questions. Even better, take a journal and write down your thoughts.

In my case how can that be true that I had better access to education? Learning languages was a priority for my family. In summer breaks I was sent to friends in East Germany.

What are your answers to this question? Even if your mind tells you that they are insignificant compared to your original story, do not disregard them. Even in that case they create an opening. They take away the edge of your story. Come back later to this question and answer it again and again.

2. Tell yourself a different story. Write your own hero’s journey.

Yes you might have had some difficulties. But guess what? Most of us did. Do not allow that difficulty to be the end of your story. See yourself in your mind’s eye overcoming those challenges and reaching your aim. And feel how it feels like to accomplish your goals.

For the best results, do this exercise just before falling asleep and right after waking up. This is when we have the best access to our subconscious mind and can rewrite the scripts which are running our everyday life.

3. Trust life. You are where you have to be at the moment. “Everything happened for you and not to you.” Byron Katie

Why trust life? Because it is so much more peaceful to give up the fight with the past. I could not change my childhood just by dwelling on the past. Telling myself that it was unfair just robbed me of my energy. Constantly reminding myself of my past was holding me back from reaching my aim at the present.

Trust that everything happened as it was supposed to be. See how much you have learned and grown as a person thanks to those difficulties.

So why is it good that you were disadvantaged as a child? Because then you can be even more proud of yourself when you reach your goals!

Do you want to become free and realise your full potential? Then stop feeding the story that is holding you back.

You see, it is often not our circumstances, but our own thoughts which are holding us back.

I have laid out the plan for how you can break through the self-imposed limitations.

But putting it into action … well that’s up to you.

So go and rewrite your story. Create your own empowering hero’s journey.

Carve out some undisturbed time, get a pen and paper and journal your thoughts.

Or even better drop me a line in the comments and tell me about what you realised. Share with me your new story.

Esther Mellar helps aspiring and established entrepreneurs to challenge long held limiting beliefs and to conquer fears which are holding them back from reaching their dreams. Do you feel that limiting beliefs are holding you back? Visit her website and download your free ebook Navigating the Inner Journey of Entrepreneurship: How to silence you inner naysayer and give yourself permission to succeed. You can follow her on Twitter.