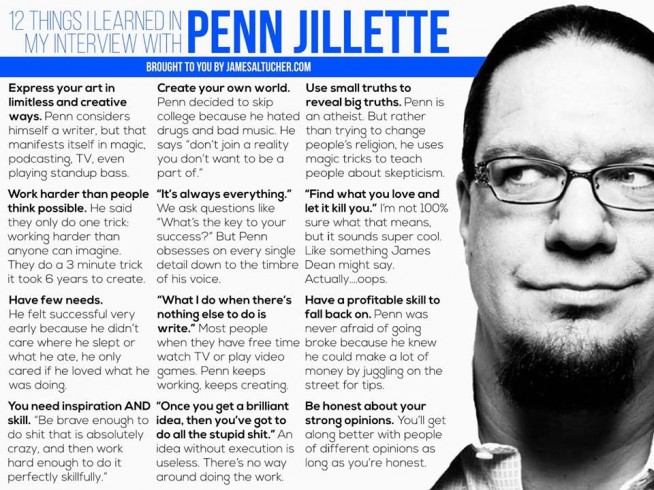 I like Penn Jillette because he went to clown college.

My parents wanted me to go to a school where I could get a job as a lawyer and a businessman and a doctor and make money and learn “normal” things.

While Penn was learning to juggle, to do magic, to walk a tightwire, and to do all clown things.

I wish Penn’s parents had been my parents.

I like that Penn not only does magic but he tells people how he does the magic.

It’s that rule we all hear as a kid. We all repeat it as a joke at least once in our lives.

Like you kiss someone a certain way and they look at you and say, “HOW did you do that?”

“A magician never reveals his secrets.” And then you go back to kissing.

Penn tells all his secrets. Right there on the stage.

And then guess what? Then he does the same trick again and even though you KNOW how he does it, you still can’t figure out how he does that.

That’s magic. I like Penn because he’s a magician who reveals his secrets.

I like Penn because he hides nothing. Read his two books. Everything he should ever be embarrassed about is there.

But he’s not embarrassed. He wrote them in his books. I like that.

I like Penn because he one time took six years to master a three minute trick. That is the essence of mastery.

I hope I have that patience in life.

I like Penn because he lives in a different universe than everyone else. And he is the ruler of that universe.

I like Penn because he helps me be creative. He tries to understand the difference between perfecting the same act over and over again for years and coming up with a new act for the audience. I need to learn more of that.

I like Penn because he is astonished at his success. “I didn’t need much,” he said. “And then I never needed again.”

NOT NEEDING MUCH + DOING WHAT YOU LOVE = YOU GET TO DO IT FOREVER @jaltucher
(Click to Tweet!)

I like Penn because he wanted to talk to me.

I tried to get Penn on my podcast. At first there were all sorts of terms. I said, “No way. I can’t beg to have someone on my podcast.”

The intermediary, who may or may not have spoken to Penn, said “Please”.

And then Penn and I (I like that I can say “Penn and I”) broke all the terms anyway.

In the graphic is some of what we talked about. In my podcast from last week is the rest.

I like Penn because he makes people happy and makes people laugh and also tries to bring truth to the world and expose the frauds.

He’s like a superhero and he actually has super powers.

I like Penn because I’m going to meet him in person in a few weeks when we both speak at a conference.

I’m already scared because what can I say that would possibly match what he says.

I like Penn because I like to expose the frauds in life. The ones who try to fool people so they can make more money. The scams.

I like Penn because he’s a child in the body of 6’7″ fifty-six year old man.

I love Penn because I want to be just like him when I grow up.

Get your copy of “The Rich Employee” for 99 cents here.