The “Chosen Ones” Choose Themselves 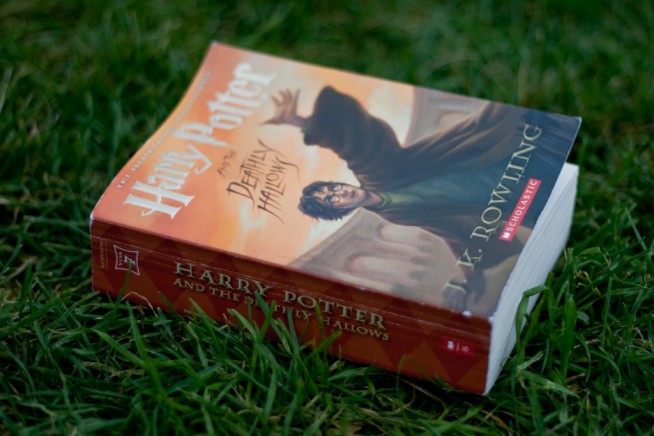 In 1994, a young woman asked for an order of restraint against her husband and filed for divorce. With no job and little money to live on, she signed up for welfare benefits so that she could afford to care for her baby daughter.

The woman’s mother had died a few years prior. She had a rocky relationship with her father and they hadn’t spoken in years. And now, as a single parent with a failed marriage and without a job, she was battling depression and on the verge of suicide.

Years later, she would refer to herself as “the biggest failure I knew.”

However, during the five years that followed her divorce, this woman would battle through fear and depression and go from living on welfare to becoming a multi-millionaire. And she was just getting started.

The woman’s name was Joanne, but the world would come to know her as J.K. Rowling.

The Rise of J.K. Rowling

Rowling’s success is even more astounding when you consider her backstory. She was still living on welfare when she submitted the manuscript for her first book. How did she climb out of poverty and reach the top of the literary world?

There are many pieces of the puzzle, of course, but here is one factor that I believe made a huge impact on her success:

When bad things happened in her life, Rowling saw it as her responsibility to do something about it.

It’s Not Your Fault, It’s Your Responsibility

I doubt that J.K. Rowling asked to be in an abusive relationship. I don’t think she wanted to have her marriage end in divorce. And I’m sure that she didn’t dream of raising her daughter in poverty. And while it wasn’t necessarily her fault that any of those things happened, she chose to make it her responsibility to do something about it.

When her marriage went south, she took her daughter and moved to a new country. When she didn’t have a job, she started writing her book. When the first twelve publishers rejected Harry Potter, she went to a thirteenth. When life got rough, she gave herself permission to make it better.

Here’s how J.K. Rowling describes this process of dealing with the hardships of her life…

Failure meant a stripping away of the inessential. I stopped pretending to myself that I was anything other than what I was, and began to direct all my energy to finishing the only work that mattered to me. Had I really succeeded at anything else, I might never have found the determination to succeed in the one area where I truly belonged. I was set free, because my greatest fear had been realized, and I was still alive, and I still had a daughter whom I adored, and I had an old typewriter, and a big idea. And so rock bottom became a solid foundation on which I rebuilt my life.
— J.K. Rowling, 2008 Harvard Commencement Address

I haven’t dealt with a fraction of the hardships that Rowling has, but even in my limited battles I’ve noticed the power of personal responsibility. You might not control the circumstances that life hands you, but you can control the energy and enthusiasm that you bring to those situations.

The “Chosen Ones” Choose Themselves

We often assume that successful people got to where they are because they went to the right school or knew the right person or had the right genetics or stumbled into the right job at the right time. It’s easier to think about success this way because then you can say that these people were lucky to have certain advantages and you weren’t, and that’s what made the difference.

And the truth is, yes, luck does play a role in life. But luck is just an opportunity. It’s just an open door. You have to decide to walk through it and to make something of it.

Looking back now, you can probably point to hundreds of situations where luck played a role in Rowling’s success. But all of those open doors would have been worthless had she not chosen to walk through them. Before the world could bet on her, she had to bet on herself.

The people who end up looking like the “chosen ones” — the best-selling authors, the successful business owners, the elite athletes, the talented artists — are successful first and foremost because they chose themselves before they had any measure of success. And that’s the piece of success that isn’t as easy to accept because it often means betting on yourself when you feel like a failure.

Where to Go From Here

We love to tell stories of success and fame, to talk about money and riches, to praise the winners, the champions, and the best-sellers. This is especially true when it involves a rags-to-riches story like that of J.K. Rowling.

But there’s nothing glamourous about battling through failure and uncertainty. There’s nothing easy about choosing yourself when each day feels like a struggle to keep your head above water.

I can remember my first six months as an entrepreneur. It was brutal. I made a ton of mistakes and zero money. But looking back now, I’m grateful that I continued to bet on myself even when each day felt like a failure.

I think there are many goals in life that require this type of struggle. For J.K. Rowling, it meant choosing to be a writer when she was a poor, single mother without a job. For you, it might mean choosing yourself when…

Successful people don’t wait to be tapped, chosen, appointed, or nominated. They start before they feel ready. They tell themselves, “It doesn’t matter whether or not it’s my fault that I’m here. This is who I am and it’s my responsibility to do something about it.”

Hat tip to James Altucher for sparking the idea of “choosing yourself.”