Here’s Scientific Proof That We Need Each Other to Shine. 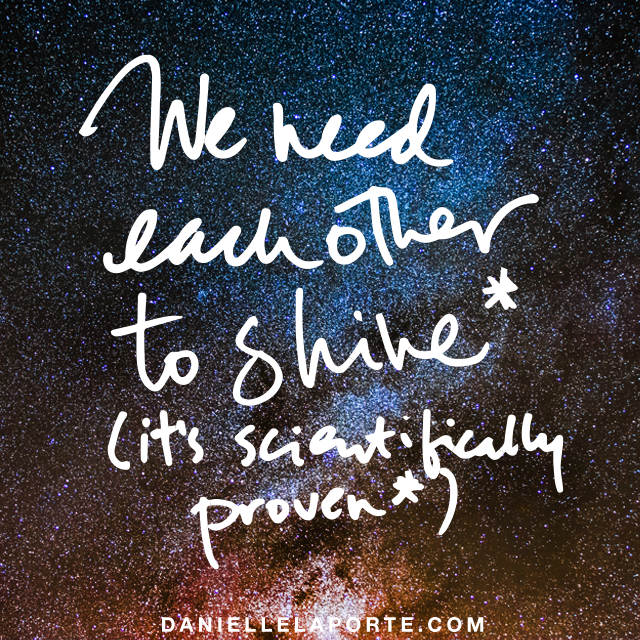 Scientifically speaking, we need each other to shine.

I confirmed this one night on a West Coast island, in the backyard of an astronomy-crazed couples’ home. They told me that they fell in love over their mutual obsession with outer space. And they had a mega telescope to prove it — like, you got on a ladder to look through the lens, and it was in its own small cabin with a retractable roof. For a small donation, island visitors could have a look-see with a side of tea and cookies.

“Check out this star, now,” they instructed, adjusting the lens. “Which one exactly?” I asked. “Because I see two stars really close together, and two stars over here, and there’s two more hanging out together over there.” They looked at each other as if to say, “‘Oh honey, we have a winner’,” and I felt like a total keener, maybe they were going to name a new constellation after me.

And that’s how I learned that, scientifically speaking, we need each other to shine.

The vast majority of stars are binary. They actually live in pairs. From our distance, it looks like single stars hanging in the sky, but through powerful telescopes you’ll see that it’s very often a duo, huddled together. Stars require each other’s gravitational pull to coexist in. After thousands, like hundreds of thousands, of years, some stars will pull apart. And in star-time, they die relatively quickly without each other.

“I knew it. I knew relationships are where it’s at.” I whispered. With all of us cozied up and gazing, we made a collective “Mmm-hmmmmm.”

I wondered about the conversations stars must have with each other. The constant relating. Desperate, in-extractible, unified, syncopated, almost-eternally comforting. If one star says, “I need more space,” does the other star say, “It’s just never enough for you!”? Or is it steady belovedness: I got your back. Wouldn’t want to do this without you. I don’t need you — but I want you.

It was a chilly night so they gave my son and me a wool blanket to wrap up in. I pulled my boy closer to me. I considered our oneness with each other; oneness with this quirky, impassioned couple we’d just met; oneness with the deer in their backyard — oneness with everyone I’ve ever met in all of my lifetimes, and ever will.

The union, the bliss, the bind, the abandonment scars, the vows, the wows. The spirit. The science.

Alone and together all at once.

All of us, stars.

Danielle LaPorte is the creator of The Desire Map: A Guide To Creating Goals With Soul — the book that turned into a day planner system, a top iTunes app, and an international workshop program. A Desire Map workshop happens every weekend somewhere in the world. Author of The Fire Starter Sessions and the wildly popular #Truthbomb series, Danielle is also the co-creator of Your Big Beautiful Book Plan and co-host of the Beautiful Writer’s Group podcast.

Entrepreneur Magazine calls her “equal parts poet and entrepreneurial badass…edgy, contrarian…loving and inspired.” A speaker, poet, former business strategist and Washington-DC think tank exec, she writes weekly at DanielleLaPorte.com, where over four million visitors have gone for her straight-up advice — a site that’s been deemed “the best place online for kick-ass spirituality,” and was named one of the “Top 100 Websites for Women” by Forbes. The Huffington Post named her Twitter feed as one of the “12 of Wisest Twitter Accounts Worth Following.” You can find her @daniellelaporte just about everywhere.