I Got into Coloring Again, and This Is What It Taught Me About Life 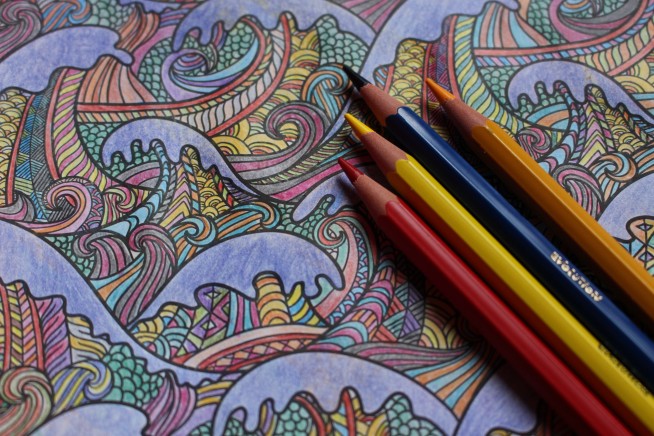 When I was a child, coloring was one of my favorite activities.

I remember sitting at a white kitchen table as gentle rays of light streamed through the windows. In front of me were some scrap paper, a box of pencil crayons, and an illustration.

I would pick up a coloring pencil, test it out on scrap paper, and away I went. The pencil touched the paper at a slight angle as I carefully shaded within the lines. I would periodically put down my pencil, assess my work, and then continue where I had left off. It was like breathing life into something that formerly seemed still and lackluster.

Drawing from scratch? Painting? Sure, I liked those as well. But there were some qualms that came along with those activities. Where was I supposed to begin? What if I messed up? My drawings never seemed perfect, no matter how often I used my eraser and tried again.

But coloring was different. A simple back-and-forth motion of the pencil yielded a vibrant hue on the page. Coloring wasn’t about right or wrong, it simply just was.

Coloring for All Ages

It turns out that you can relive your coloring days again.

I recently walked into a bookstore and noticed that there was a table near the front with coloring books by different illustrators. Many of them had images of landscapes, patterns, and people. Some were based off popular films and series, such as Game of Thrones.

Even though the trend has spread to adults, there’s a difference in how this activity is marketed towards different groups. For kids, coloring is used to develop skills at an early age. The focus is on learning about our world, developing creativity, and fine-tuning motor skills.

While adults also enjoy these benefits, there seems to be a bigger focus on stress relief. This art medium is promoted frequently as a type of art therapy that people can indulge in to shed themselves of worries and anxieties.

But, I think the reason why coloring is enticing to adults is similar to why it attracted us as kids. The rules are simple: draw within the lines and use the colors you want. You can’t really go wrong when coloring.

Sure, some colors work better together than others. But then again, there’s no such thing as a perfect or imperfect coloring scheme.

The illustrations are already there, and your role is to play along and make it your own. You don’t have to worry about creating the right proportions, sizing, or various stages of progression. Just color.

I’ll admit it. When I first heard about coloring books for adults, I was skeptical. My first reaction was: “Coloring? For adults? Really?”

But after seeing a friend work on a piece and encourage me to try it out, coloring made sense. As adults, our world is increasingly filled with responsibilities, worries about the future, and numerous other stresses.

We leave little time for ourselves to relax, play, and have fun. Even when we do, there’s often a nagging feeling that we should be doing something more productive.

Coloring gives people an outlet for expression and creativity. A chance to step out of our environment and into another world. The way I see it, there are two lessons that we can gain from the art of coloring:

But consider what would happen if someone put a blank sheet of paper in front of you and asked you to draw a picture and color it in. You would have to think about what to draw, keep a steady hand, and get the picture just right. And that’s before you even get to the coloring stage.

On the other hand, if someone were to put an illustration in front of you and tell you to start coloring it in, you’d be able to focus on just one goal. The outline’s already been done for you. Now, you’re adding the finishing touches by enhancing the picture with colors.

When you can hone in on a few tasks, you can devote more energy to improving the output. Maybe instead of thinking of creativity as something large and sprawling, we should think of it as focusing on something specific.

I think that one of the best things about coloring is that you’re concentrating on what’s happening right now. It isn’t so much about the end product, or what happened before. It’s about the present.

We spend a lot of our free time thinking about either the past or the future. We worry about regrets, consequences, and how the present will affect us later on.

Often, we base our actions on the premise of “suffer now, and reap the rewards later.”  It’s as though enjoying life today leads to hardships later, and vice versa. The problem is that this type of thinking eventually burns us out, or we give up on a goal because it’s just not fun or worth it anymore.

So instead, I’ve been taking a coloring approach to things. I think about aspirations less in terms of the end goal and more about the process.

Don’t Forget To Look Up Once In Awhile

It’s easy to lose track of time when you color.

Sometimes my eyes would get tired after coloring for hours. This would happen especially when I was fixated on small areas in the drawing.

In coloring, like anything else you do, it’s good to pause once in a while. Put down your pencil, take a step back, and appreciate the progress you’ve done so far. Your mind (and your eyes) will thank you for it.

Over to you now! Have you joined in the coloring trend? If so, how does it feel to be coloring as an adult? Let me know below.

Melissa Chu writes at JumpstartYourDreamLife.com, where she helps people live better and achieve their goals. For more ideas on success and making an impact, join the newsletter and follow her on Twitter.