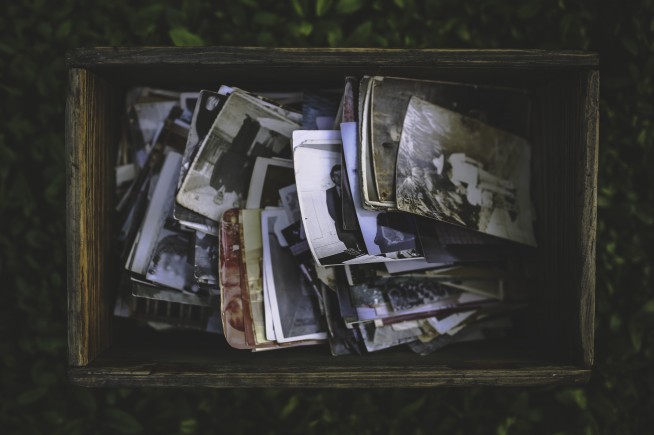 I hadn’t prepared myself for the rush of emotion I would feel standing in the middle of that tiny one-room apartment where my mother lived—truly lived—the final years of her life. I had to hurry in order to arrive at her graveside along with the seven other siblings and their families, but I had to grab it, that one treasure I wanted more than any earthly possession she had.

“Ruthie!  Ruthie!” Mama screamed from the kitchen as I played with my Barbies in the den. I came running at the sound of her voice. “Bring me the frying skillet; we’ve got chicken to fry.” The house buzzed with excitement the day before a trip, and this trip was special because we only saw our cousins occasionally. North Carolina seemed like an exotic place to me. After all, it took longer to get there than to any place I had ever been. Oh, how I loved those trips and staying with my aunts and uncles.

In those days, road trips seemed a bigger deal. Mama always fried up some chicken the night before a trip, and Daddy would get out the homemade plywood luggage carrier he had ingeniously equipped with a refrigerator compartment. I’m sure we made quite the scene on those roadways. Aromas danced around the tiny farmhouse as those chicken parts sizzled to golden perfection, and then, wrapped tightly in the fridge, the juices and seasonings worked their magic, concentrating those spices as if they knew this was a special meal. Somewhere along the winding country roads, we would stop at a roadside picnic table, and Daddy would buy us the coldest Pepsi Colas we had ever tasted at our favorite stop, a mom-and-pop gas station typical of the late sixties. Biting into that cold chicken with all ten of us laughing and arguing, and Daddy making funny faces and teasing us all became a foundational memory of my childhood.

Mama showed us her love more through that fried chicken than she ever seemed capable of expressing with words. I knew though, that every splatter of grease neglected on that massive frying skillet year after year, represented more than just meals she put on that table over and over; that’s how Mama said, “I love you.”

My oldest sister approached after the funeral. My husband had given the eulogy, and we were headed from Mama’s home in Virginia back to North Carolina, where we would lay her to rest beside Daddy, right next to the property where he and his nine siblings had been born and raised.

“I have to clean out Mama’s apartment to get it ready to rent,” Margaret started. “I know you won’t make it back here before you head to Michigan. She doesn’t have much left, but if there is anything you want, you need to go over and get it now.” She put the key in my hand and reminded me how long it would take to get to the rest of the service in North Carolina. “You’d better hurry.”

I did, and now I stood in the center of that tiny place for the few seconds I had, taking in the humble surroundings.  Mama had so graciously handed out every belonging she had that she thought held any value. She wanted us to have those things while she was living, so there would be no reason for anyone to argue after she passed away. Most of what she lived with in those final years came from Good Will, and anyone would have thought it was a mansion as happy and content as she was there. I never heard a complaint come out of her mouth about how small it was, or about anything else for that matter. I glanced over at her desk, where I had watched her a year earlier, exhausted from a debilitating muscle disease that crept through her lungs. I asked if she was tired. She looked at me, smiled, and said, “I’m ready to go home.” That was as close as I ever came to hearing her complain as the disease suffocated her day after day.

Shaking myself away from memories flooding my heart, I went straight for the kitchen. I knew exactly where it was, the same place she had always kept it, and I walked out her door for the very last time. We were taking Mama on one last trip.

Heading down to that magical place of my childhood one more time, but this time, Mama wasn’t coming back.

I don’t often pull that skillet out these days. It’s not worth a dime to anyone who didn’t know and love Mama, but from time to time, I toss some chicken in flour and those fabulous seasonings Mama used to use, and I break out real lard, not that sissy vegetable oil, and…

Is there a mundane treasure of your own youth that speaks of your connection to a generation past? Tell me about it in the comments below.

Ruth Ann Frederick instructs young writers in a global online homeschooling service and has authored and co-authored four grammar texts: English Guide to Grammar, Composition, and Logic and three levels of Grammar the Write Way: (Precepts, Core, and Application). Her personal style is somewhat nostalgic—family and wisdom oriented—and she shares her musings at her personal blog:From My Front Porch.