How to Stop Beating Yourself Up Over Just About Everything 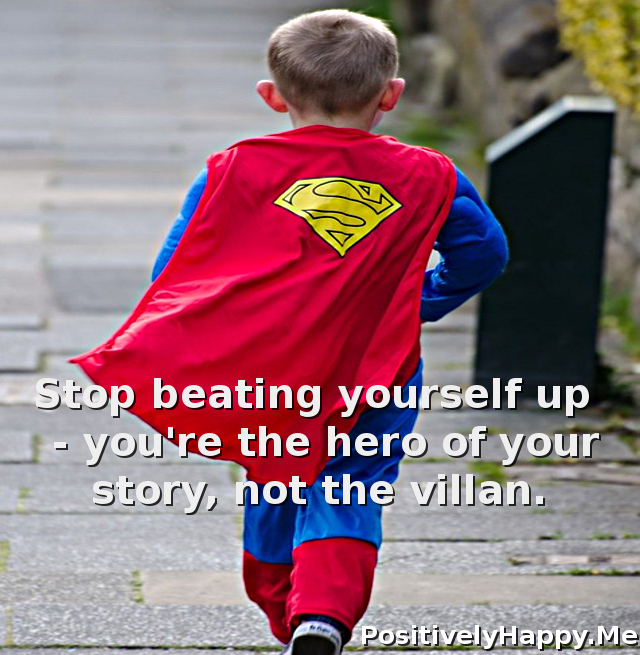 The main thing in life is not to be afraid of being human. – Aaron Carter

Sounds all too familiar, doesn’t it?

Your inner critic beating you up again over just about everything in your life – family, relationships, career, money…the list goes on.

And it feels like everyone sees just how often and publicly you mess up. You’ve got the starring role in your own movie, not as the hero or heroine but as the dumbass who can’t get his or her sh*t together.

It’s a tragicomedy. Or at least, that’s how your inner critic would have it.

And what makes it all the more painful is that you’re dying on your ass out there, trying your absolute damnedest.

But each day just seems to bring more opportunities to feel dumb, to screw up in front of everyone, to fail at everything.

Each day brings more opportunities for your evil inner voice to convince you that you’re not good enough.

And never will be.

And maybe it’s right. Because no matter what you try, everything seems to blow up in your face.

But everyone else…damn! They seem to have their sh*t together. They’re looking like the hero in their movie, not a hapless extra in someone else’s, like you.

I was that hopeless clown for years, right through my twenties and thirties. The lost, bewildered, queen of ludicrous mistakes and bad choices. If Golden Globes were awarded for epic fails, I’d have filled the display cases in the home I still hadn’t managed to own.

Truly, failure became so familiar it became who I thought I was. A no hoper. But I couldn’t even make a success of being a failure. Thinking about how far I was from even making it as a human being made me embarrassed to be me.

There was one thing I got good at though, ripping into myself for being such a dumb ass. Oh yeah, I became a mega expert at that. It became a habit and one I was soon so good at that even if I succeeded at something, instead of a moment of shining as a would-be hero, I criticized myself, finding fault with some tiny element I could have done better.

I was punishing myself for being fallible.

Hating myself for being human.

Maybe you feel like I did then? I’m sorry, that’s a horrible place to be. Because the reality is, if you hate yourself you will never be happy, even if the whole world does love you.

Which right now, it feels like they could never do, I know.

But if you’re ever going to be truly happy, you need just one person to love you, and that person is you.

But how can you possibly love such an imperfect person as yourself? How can you stop beating yourself up, stop feeling like a failure over just about everything?

Being you, being any of us, isn’t always easy. I still find myself as irritating as nettle rash some days. But that’s okay. Like me, every day you have to cope with the whirling mass of conflicting thoughts and emotions that make up being you.

And sometimes you feel anxious, angry, overwhelmed, out of control. Worse, you feel you’re the only one losing this emotional struggle. Everyone else seems to be able to keep their sh*t together.

Whenever you’re criticizing yourself for letting your emotions run wild, remember you’re not alone. Everyone loses control sometimes – they’re just better at hiding it.

Because we are all human. And emotions are what make us human.

It’s time to accept that you’re human, that you’re the hero of your story, not the villain.

Accept You Aren’t Your Family

Family relationships rarely run super smooth. You weren’t born into The Brady Bunch. You try to be loyal and respectful. But it seems that every one in the family has some expectation of you. Which in their eyes, you still haven’t managed to measure up to yet.

You never agreed to all that pressure. You never promised you would be perfect, but you slam yourself for not being able to overcome your flaws for them.

Pounding yourself into the ground isn’t going to help. But understanding the real role you’ve been cast in your family will.

You were born to have top billing as you. Even though you love your family with all your heart, you aren’t them. They matter because you love them. But this is your life, your say. Your aspirations, your years to live just as you please.

And your inner critic just needs reminding that you have the most important family role to play – the happy person, content with who you are, excited about the path you’re choosing to walk.

Accept, embrace the bond you share. . . whilst still staying true to yourself.

Accept Your Relationships Will Roller Coaster

Girl meets boy, boy meets girl, they fall in love, have a misunderstanding, make up and live happily ever after. Out come the Kleenex and the credits roll.

Real life and real relationships are rarely like that. As you know. Sometimes it seems that you just stumble blindly from one argument to the next, from one heartbreak to another.

There’s a reason for that – you are a real person, way more complex than any Hollywood screenwriter could capture. And so is your boy or girlfriend, husband or wife.

Sure you never mean to argue, to hurt them, or to be hurt. And you try to understand, to put the wrong right, to forgive. But there are two of you in this. Different people with different egos are going to rub up against each sometimes no matter how much they love each other.

Being hard on yourself for being different isn’t a solution.

Next time you go head to head with your inner critic about conflict in your relationship, remember that your script is more authentic than any fairytale Hollywood schmaltz. Your partner fell for you, the real you.

Accept both your own unique qualities, beliefs and opinions and those of your partner and use them to find a solution that works for both of you.

You’re a human being and all human beings make mistakes. Fact. Fact because the only way to never make a mistake, is to do nothing, be nothing and achieve nothing.

And you’ve never taken that role in your movie. You’ve got too much drive, too much character. No casting agent would give you a second look to play the guy or gal who just sits and watches life pass. Not happening.

So what it didn’t work out? What counts is that you did something. Some call it ‘failure’, well, that’s a common step in doing anything. If you knew how to do it perfectly, you’d have done it already.

Trouble is, you want to be an expert without first being the apprentice. You want to be the star without being the understudy. Slow down.When you criticize yourself for messing up realize:

All human life is some part failure and some part achievement. – Dalai Lama.

Accept that falling down is part of any process and jump right back up again. You get to decide how your movie pans out.

Accept You Never Started The Fire

The world was turning and burning long before you came along and it will be long after you’ve left. It might seem like a disaster movie, but you bought your ticket long after it started.

You may never be able to solve all the world’s problems, but beating yourself up about it, isn’t going to either.

What is, is understanding that in reality you can put some good out into the world no matter how big or small. Putting out the fire is going to be a collective effort of many. We need a team task force, no lone super hero on this one.

Whenever your inner critic slams you for not doing enough, remember, you may only have a bit role in this epic drama called Life On Earth, but,

Act as if what you do makes a difference. It does. – William James

Accept that you are already playing your part. Be proud that you care and then go get on with your story.

Accept You Don’t Have It All Figured Out

No one told you life would be this hard. Families, relationships, careers, money and all the other stuff that make up life can seem so confusing, so hard to get right.

Sometimes it seems as if the rest of the world has the whole thing figured out while you’re fighting a lone battle just to keep going. You fear you’re actually losing the plot, along with any handle of how the heck life works.

And nobody told you how to avoid getting hurt. They didn’t tell anyone else either. You’re not alone. So, so not alone. We all missed that class somehow.

Everyone is struggling in life, but just like you, they don’t admit it publicly. They too hide their anxieties and cover up their fears. No one has it all figured out. And you know they can’t have because just like you, they’re still writing their story.

It really is fine to go out and play the character you really are – the vulnerable, needs-help guy or gal. Think about it, everyone loves the vulnerable character in movies for one reason – because they recognize themselves in it. That’s the only character they really feel anything for.

And the one that always gets the best lines. So whenever you attack yourself for not feeling up to life’s battles, repeat this:

Until you stop breathing, there’s more right with you than wrong with you. – Jon Kabat-Zinn

Accept that life is hard sometimes and see how amazing you are for keeping on keeping on.

You’ve slammed yourself for not being perfect, for disappointing people who in truth, asked too much.

You’ve berated yourself up for starting fires that were none of your doing.

But worst of all, you’ve criticized  yourself out for not knowing it all, for needing help.

Which is the one thing the world needs right now.

And you’re one of them.

So flip your mean inner critic the bird and:

The hero, not the villain of your story.