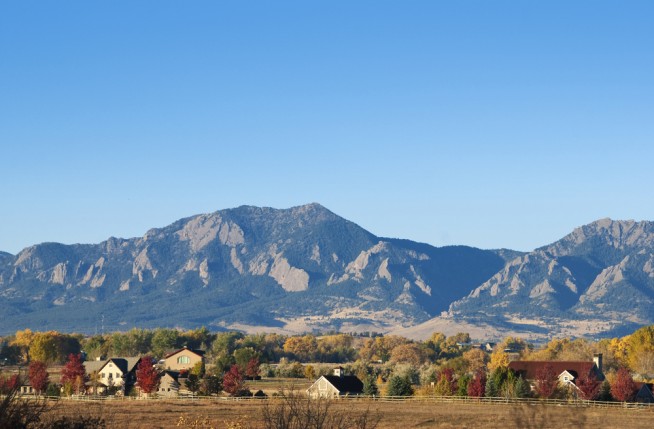 We have recently purchased a vacation home in San Diego and I was going for a run this past Saturday morning. I was on a bit of a high because my dream had come true of owning a second home in Southern California.

I have been coming here for about three years for an annual Yoga retreat and when I first came I didn’t have much money to be honest. But I wanted to live here and went home and created my vision board.

Well fast forward three years and here I am as a homeowner and the crazy part, was that during my run I realized the little apartment room I rented three years ago on my first trip was only 1.5 blocks away from my new home.

The power of having a vision and a dream is so important and is crazy how powerful it can be.

It also reminded me of a little history from my home town of Boulder, when I was trying to find a bit of history about Boulder to explain to my daughter.

And this VISION thing just popped out at me again then, so I wanted to share that with you too.

In the middle of the 19th century a group of explorers headed out West to explore the area of Boulder because they believed gold was to be found there. At that time Boulder was still part of the Nebraska Territory until it became part of the Colorado Territory a number of years later.

Well gold was discovered and the inevitable happened as gold seekers rushed to the area to get rich. To make a buck and make a name for themselves.

Some people did and others didn’t.

Just like so many other gold rushes, it didn’t quite work out as expected for everyone.

Even though coal was also discovered not long after, many folks moved on after failing to strike it rich. They went on in search of better gold areas to hopefully realize their dreams.

Many of those original gold seekers stayed on though. Some continued to mine and others saw abundance and opportunity, where others couldn’t. There was nothing there really but just a blank canvas of nature.

From that blank space of canvas, came Boulder which in this day and age is one of the most sought after areas to live in the USA. It is a thriving community with a wonderful University, a diverse cultural experience and a haven for businesses and the outdoor types.

How did that happen? How is it these cities and towns all around the country rise from nothing to these thriving communities that we now love, are proud to be a part of and call home?

They come from a Vision…that is how. They start from nothing but a Vision and a place of Intention.

You see those folks who went on that path to strike it rich…well many failed. Of those that failed some put their heads down, picked up their belongings and trudged off to find their next treasure. Many would have left broke, disappointed, angry I am sure, wondering when they would make it big or if they would ever make it big. Some would have been thinking why is this life all about lack, poor luck and hardships right?

BUT others took the hit and looked up. They probably thought OK so that didn’t work out. There is nothing here but what can I make happen? It was from that thought process that the first building was erected, supply stores were born, trade thrived, wheat was planted, farming activities began and the first school was built.

Things began to multiply and the City of Boulder grew to what it is today. It blows my mind just thinking about the history of not only this city but of our entire country. The people before us were amazing.

So what lessons can we learn from them?

Life doesn’t always work out the way we plan – we can have the biggest dreams, intentions and goals and do everything right. We can put a huge amount of energy and invest all our money into something and still fail to reach our goals. That isn’t always fun right? It causes a lot of pain, stress and anguish.

That doesn’t mean we quit though. That means life has a plan for us that may be greater than what we initially expected. Just like those gold seekers who came to Boulder with massive dreams and failed. Some moved on disappointed and others, although disappointed, stopped and thought…OK maybe there is something else for me to do here.

Stop. Look around and become aware – We’re going to experience disappointment and crushed dreams during our lifetime…that is just a fact. The important thing to remember during these times is to just stop. Stop the mental chaos and disarray that can occur and explore the possibilities that there is perhaps something else. Something bigger and better waiting for you.

Something that you didn’t even expect and completely different to what you had originally planned. We need to do this from a place of calmness and awareness in order to have the mental clarity to find the answers.

All you need is a vision – Those gold seekers who chose to stay and make a new life, didn’t have a thriving community with complete infrastructure to jump into. There was nothing there. Nothing!

But that didn’t matter. Why? Because they had a vision in their heads. They had a blank canvas and allowed that imagination of theirs to start to create. That isn’t easy to do, because it can be hard when there is nothing there. But as long as you have the end result in your head, that is the vision you hold onto. That is what is going to transform that blank canvas into a completed work of art.

Build a community – Did these folks work at this alone? No, they wanted to build a town, a settlement, a city, a COMMUNITY. They wanted to create a community where they could live, work and play and enjoy life TOGETHER.

You cannot build your life vision alone. You need that community, so make sure you have a community in your mind when you’re creating your vision.

I encourage you to look up the history of your town or city for a little inspiration and how you can learn from those early settlers and transform your own life.