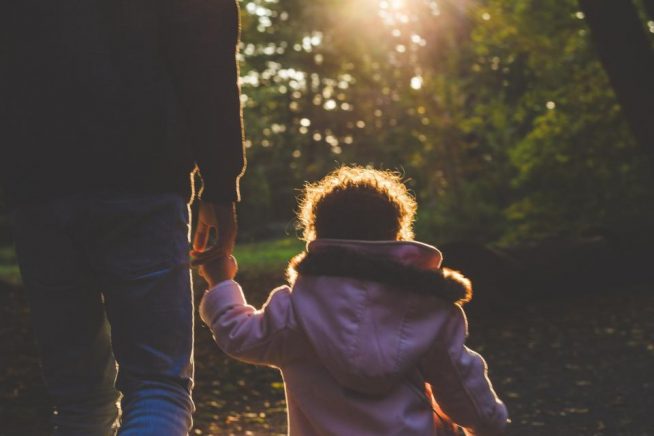 I was eight-years-old, a third grader, riding in the passenger seat of my dad’s car.

We were on a familiar nine-mile stretch of two-lane highway headed home. A newspaper sat on the bench seat between us. I read it for a bit before seeing a word in an article that I didn’t know. As was customary, I stopped reading and inquired about the word.

“Read the sentence to me, Jamie,” he responded. I read it aloud to him.

He cleared his throat, his bass voice rumbling along with the car’s motor. “It’s when a person touches another person’s private parts without necessarily having their permission.”

I knew my dad. I knew he was uncomfortable. I wasn’t raised in a family who openly discussed sex at any point of my life. I learned the word “vagina” from Kindergarten Cop when I myself was a kindergartner.

Dad kept on driving, sitting in his own awkward silence. I sat in complete awe. In that moment I realized that my dad – a stoic, straight-laced, perfectly postured gentleman – just answered me honestly. Despite an unpleasant topic. Despite it being awkward for him. Despite his little girl asking about an incident that was far from innocent. He answered me honestly.

With that one honest and uncomfortable (for him) answer, I saw that he took me – a kid – seriously. Up to that point, I knew that Dad loved me; that’s the day I learned that he also respected me.

Continuing on through grade school and into middle school and beyond, it was my dad’s advice that I both sought and heeded because I trusted him. It was his opinions that mattered to me, including his opinion of whomever I dated, because I respected him.

I’m an adult now and have a nearly three-year-old son. When he asks me a question, I answer him honestly. Even when he points to me in the bathroom and asks, “Mommy, where’d your penis go?”

My son hasn’t learned anatomy from Kindergarten Cop as did I, but he is learning respect as it was taught to me – not through shouty demands or an iron fist – by showing it.

My son is learning respect as it was taught to me – by showing it. @CommodeToJoy (Click to Tweet!)

Looking back on that car ride home with Dad, he taught me the meaning of two words that day. And he did so by giving an honest answer.

Jamie Muscato is a thirty-something stay-at-home mom. Between rounds of singing “the Wheels on The Bus” with her son and cheering on the Fighting Irish with her husband, Jamie plays with perspective, laughs at farts, and blogs about it all at commodetojoy.com. You can follow her on Instagram.