When We Need Closeness, but from a Safe Distance. 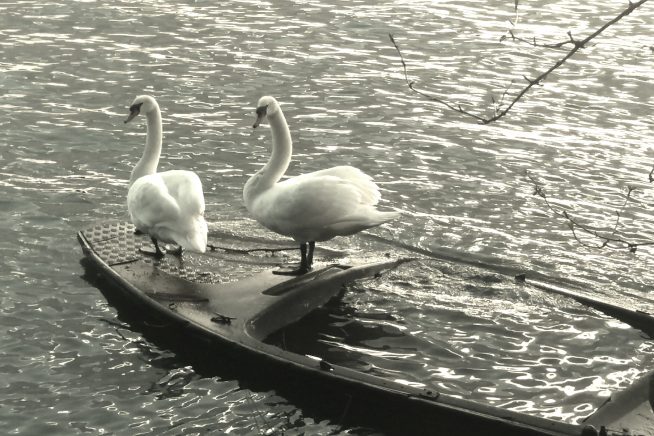 You may know the feeling: wanting someone to be close to you but from a safe distance. We, humans, are relational beings.

And sometimes we are afraid that closeness may make us feel unsafe and cause pain. Especially after relationships have ended and we are left behind.

I was reminded of this when I spoke with a good friend of mine, Sabine, on the phone at Christmas. At some point I commented on the background noise at her end. It was her green lady budgerigar, Kiki, chirping away.

Sabine and her family have had a couple of budgerigars for many years. By all accounts, they were a formidable team, Kiki and her male pal, happy in each others company and part of the family.

They had their ways of showing disapproval and throwing tantrums in a budgerigar sort of a way: when they were kept alone for too long, or when the humans went away on holiday and someone else looked after them.

The family decided to get a new companion for Kiki, who had started to withdraw. We assumed she was missing her mate.

The new bird was younger and more energetic. Kiki did not like too much closeness, the noise and the intrusion. Perhaps it was better this way, than being alone. But the old bird did not appear to sing “I want to be close to you”.

Then the younger one died last year of a bird virus.

Sabine was unsure what to do for the best. Kiki was alone again and started to withdraw. The vet advised against getting another bird for at least 6 months, just in case Kiki had also caught the virus and may infect the new bird. So the family opted to wait.

Kiki was alone, again, without her long-term mate and without the more recent mate, who had been a bit of a hand full. The old budgerigar appeared forlorn. And she had lost her voice.

So I was surprised to hear all this chirpiness over the phone. What had happened?

Sabine explained that, by chance, she had moved the outside bird feeder closer to the window, where Kiki sits in her (open) cage home. She had started to observe the comings and goings outside, started to become quite animated and found her voice again.

I am not an animal psychologist and perhaps project the need for a happy ending onto the story. In any case, the family, who has lived with Kiki for many years find her more relaxed and good natured, since she has found new company – at a safe distance.

And this time the company does not compromise Kiki’s freedom and space. Perhaps she is singing “I want to be close to you but from a distance.”

She appears “happy” and we wonder what will happen when the birds outside no longer rely as much on the bird feeder.

When relationships end, companions or partners leave or die, it can be difficult to let another close again.

You may grieve for the loss and feel disloyal for wanting closeness.

You may be afraid of allowing someone again close to you.

It may just lead to more pain.

There is a whole range of possible reasons, why having someone close to you after a loss can be tricky, especially when we get older.

We might need to find closeness at a distance, that feels emotionally and perhaps even physically safe.

It will not be the same and it might not last forever. But it might help along the way.

What is your own experience? Do you worry whether any of this may happen to you? What can you do to help yourself and to feel close? And how much distance do you need to feel safe?

This post was originally published on Between Self And Doubt.

Karin Sieger is a psychotherapist and writer. She specialises in supporting people through anxiety, bereavement and life-changing illnesses like cancer. Her blog is Between Self and Doubt. You can follow her on Twitter and  can sign up for her newsletters here. For more information visit KarinSieger.com.