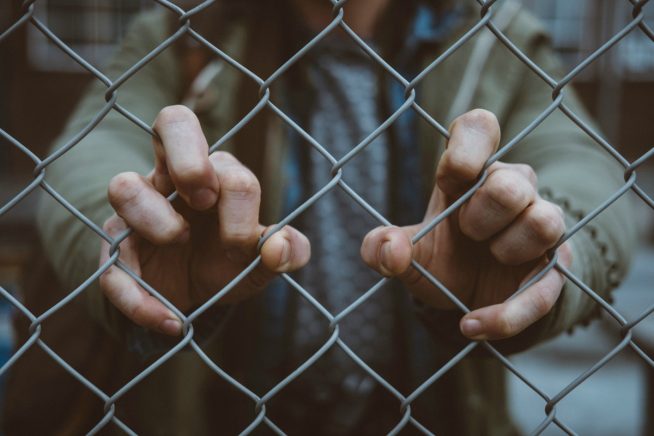 In ancient times, the indigenous people of Hawaii lived under a set of strict indigenous laws called kapu. Villagers were forbidden to look the tribe’s chief in the eye, walk in his footsteps, or even let their shadow fall on royal grounds. The punishment for violating the sacred kapu was death. Hawaiians chased and hunted down the offender to put him to death, unless he could reach a puuhonua: a place of refuge. In this village of refuge or salvation, the kahuna (priest) purified him in a secret ceremony, and the transgressor was forgiven.

I met Maleko in the place of refuge on the Big Island of Hawaii. He is a native Hawaiian who spends most of his days in his workshop, carving scenes from ancient Pacific myths, or painting the legends of his people. When I walked into his studio, his five grandchildren were climbing all over his giant body: two were hanging from his massive legs, one was bouncing and laughing on his knees, one spread his arms open around his chest with his head on his heart as if trying to hug a tree, and one was dangling from his neck. His family loves him, and all who meet him see why: Maleko is a gentle man with a giant heart.

I visited him to learn more about the spiritual traditions of the Pacific Islands and he welcomed me into his home with open arms. He served us a traditional Hawaiian fish meal and shared with me fragments of wisdom and stories from his ancestors.

We spent the afternoon together, and I noticed something about him. Maleko never looked me in the eye. He didn’t look anyone in the eye. When he talked to people, he looked at the floor, or out the window, at the clouds. His voice was filled with love, and he talked only with kindness to family and strangers alike, but the lines on his face hid deep inner scars and profound pain.

“It all started when I was young,” said Maleko. “I had just left school with my buddies, and we were going to swim in the ocean and fish for dinner. I stayed behind to go to the loo and told them to wait for me. They didn’t hear me and kept on going. I went down the stairs into the bathroom to pee, when an old man came up from behind. He hit me hard. He beat me with his fists in my face until I collapsed on the filthy, wet floor, covered in urine and my own blood. He raped me. I was twelve years old.”

I didn’t know what to say. I remained silent. I was seeing this loving grandfather, a powerful man with a gentle heart, and I could not believe what he has gone through.

“I didn’t tell anyone, but I was dying. It was a great shame for me. I was a kid and I was dying. I had been in bed for several months after, and I couldn’t move or focus. I was dying. One day my cousin came to visit me from the other side of the island – he was a rough guy – the leader of a gang. He grabbed me from my bed and put me in his car in the passenger seat. I was a mummy, a jelly human being staring into the void. He parked in front of a bank and left the engine running and me in the car. He grabbed my shoulders: ‘If you see anyone coming, honk the horn’ he said.

That was my first bank robbery.

It felt cool. I felt like a man. Months later, I unleashed my anger on strangers in the street. I’ve hurt people. ‘You’re just like him’ I thought about one or another. I took my fury out on them. It did not matter to me whom I was hurting. But the pain didn’t disappear. It shifted. It became terror, fear and rage.”

I took a deep breath: “We are tormented by fear and rage, not because of what others did to us, but because of what we did to others.” I spoke these words with only love for him. “What we think and do unto others is the greatest source of torment,” I said.

“What are you saying, kid? What about when we get hurt when others hurt us?” said Maleko.

“You have been through terrible pain, and you were only a child,” I said. “When we are hurt, if we can go away from what hurts us, if we can leave the circumstances that injure us, if we change the environment and look for help, with time we forgive and we heal.

The human reaction is to hurt others in return for our pain, but when we are the ones bringing pain and suffering to others, what we do drags us deep into a hell almost impossible to escape.

This is why Jesus said to his disciples: Temptations to sin (hurt, injury, pain) are sure to come, but woe to the one through whom they come! (Luke 17:1). All of us suffer in life, but the ones who bring the suffering find the greatest pain. The wounds we inflict upon others are the most painful for us.

Let me tell you a story. I had a colleague in high-school, a beautiful, shy and very quiet girl. Some boys in my classroom used to beat her up during breaks, for no reason. They hit her hard with their fists in the back, or slammed her head on the desk. She suffered a lot, and to my shame, I was afraid to do anything about it. When we graduated, she moved to another city. With time she found healing. She’s married and has a beautiful child. But for the boys, one of them had severe drug problems, and I’ve heard another was in jail. Suffering is sure to come, but woe to the one through whom the suffering will come.”

“I am an old man, and I’ve seen many people speaking empty words. Just words, with nothing behind them, kid.

“I am 33,” I said. This time I was the one who didn’t look him in the eye. I haven’t gone through his experience, and I had no right to say what I’d just said to him.

“I am an old man and I’ve seen many things in my life. I’ve heard a lot of empty words from people, kid. But you’re different. Your words are not empty. What saved me was my heart. I focused on my dreams instead of my pain. I listened to my heart. I came here to this place of refuge twenty years ago, to paint and to carve into wood the history of my tribe. Our suffering, and our love. I am learning from the old kahuna – the priest in our village – to purify myself through forgiveness. Because the opposite of forgiveness is death, and I have so much to live for. I’ve got my family and my grandchildren. I pray to find forgiveness for what the man did to me years ago and forgiveness for what I’ve done unto others. It is hard, but it’s the only way.”

DR. DRAGOS – Internationally renowned scientist and filmmaker, director of the award-winning documentary film, THE AMAZING YOU, featuring NASA legends, Rock stars, New York Times bestselling authors and the Angry Birds. Dragos spoke at conferences on five continents and his work has been translated in sixteen languages. Check out his new book: Sleepers. You can follow him on FB.