Become the World’s Greatest at What You Love Most 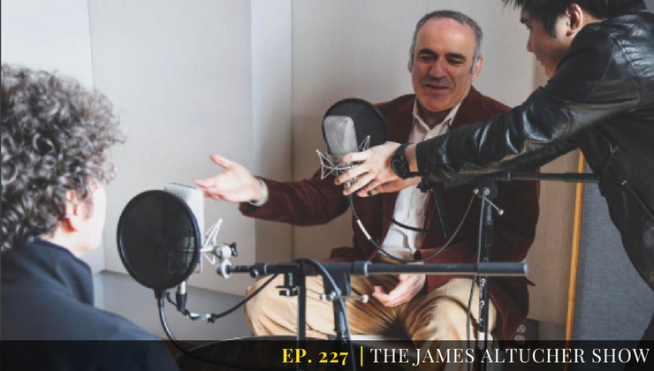 I can die now.

But first I want to explain why. It’s not a suicide note. It’s a love note.

In 1984 I became obsessed with chess. It was basically a replacement for the fact that no girl would go out with me. I had braces, acne, wild hair, and did I mention more acne?

At the time there was a young contender for the world chess championship, Garry Kasparov. He was up against the older, more “Soviet” champion, Anatoly Karpov.

I followed every game. I played through them after each one, studying all the nuances as I began my own rise through the chess ranks.

Years later, because I was ranked a US master, I got accepted to graduate school (I am convinced chess is the only reason) and my office mate were the creators of a little computer called “Chiptest”, which at the time was the best chess computer in the world.

My job: play Chiptest all day long every day. Eventually, they renamed “Chiptest”, “Deep Thought”, after the famous most powerful computer in the universe featured in “Hitchhiker’s Guide to the Galaxy”. And then IBM “bought them” – hired my officemates and “Deep Thought” became “Deep Blue”.

They offered me a job as well. I went as far as taking the urine test for drugs and then I turned down the job. Because I had a girlfriend who I would have missed. And because I was so insecure, I actually turned down what would then have been the opportunity of a lifetime.

A month later she broke up with me.

Six years later, I was in the audience in New York City when Deep Blue beat the World Chess Champion, Garry Kasparov in a historic match. For the first time, a computer has enough “intelligence” to beat the greatest player who ever lived.

Again, I studied every move. I’ve probably played over every game Garry Kasparov has played in his career. But this match was an important milestone in both computer and human history.

But that’s not why I would kill myself.

My lifelong dream – play one game against Garry Kasparov, has been fulfilled.

Here’s the video of the game.

For those a little deeper into it: here are the moves.

I played an opening I’ve been playing for 32 years (nge2 variation of the King’s Indian Defense). I first studied this opening with Michael Wilder, who was the US champion at the time.

After 32 years playing this opening perhaps thousands of times, I was stumped. Garry Kasparov made a move I had never seen before (7…Nc6). Then he slowly crushed me. I don’t think I can play this opening ever again. (Greg Shahade…should I use the Classical b4 you played against me in DC 1997?)

A couple of small things I noticed. I noticed (see the video) how he was constantly adjusting my pieces. I think he instinctively tries to dominate the board in every way including physically intruding into his opponent’s space to say “I control all of the pieces on the board”.

This is a small thing but I also like how he pounds his piece into the board on a move, as if to say, “this piece is going in exactly the PERFECT spot. Don’t mess with it!”

That said, he obviously did not need psychology to beat me.

So, one of my final bucket list items achieved, I feel good about where my life has taken me. Thank you podcast.

It’s rare to speak to someone who has achieved the #1 peak status of an area of life that I, and millions and millions of others, look up to.

How do you do it?

Garry Kasparov studied under the former world champion Mikhail Botvinnik, who was the world chess champion from the mid-1940s until the mid-1960s.

Garry’s written many books on chess. But by far his best are his series, “My Famous Predecessors” where he studies and breaks apart the games of every world chess champion before him.

In his first match for the World Chess Championship, Kasparov was down five games to zero. If he lost one more game the match would be over.

He studied all his failures. What was he doing wrong? And then he began the meta-game. Instead of playing for a win, he played for a draw in each game. After 40+ draws, his opponent, Karpov, started to collapse under the pressure. Eventually, the match was canceled and restarted, giving Kasparov more of a chance to study where he had gone wrong. He won the rematch and became world champion.

Although Kasparov was talented and a superior player, he was also the first to use computers to study his opponents. Ever since the 80s, he put together databases of all the games his opponents ever played and he studied each one to learn their styles, study their moves, and figure out the secret surprises he can use to beat them in tournaments and matches.

Garry Kasparov’s teacher, Mikhail Botvinnik, was very sensitive to smoke, during a period when chess players would regularly smoke at the table during games.

So he would practice while having someone blow smoke straight into his face!

Magnus Carlsen (who Kasparov coached) was recently in NYC to play for the most recent World Championship. I was at the matches, watching. He kept getting into winning positions and failing to “close the deal” and win (although he eventually won the match in the tie-breakers).

The commentator, Judit Polgar, said, “his coach is going to have to set up position after position where he is slightly winning so he can learn how to win these”.

He had to “learn” even though he is now the best. “Beginner’s Mind” never stops.

Nobody, not even a world champion, can do one thing his whole life. Kasparov has been a frequent commentator on Russian politics and his Anti-Putin politics has even brought him to the candidacy for President of Russia at one point (probably why he lives in America now!). He is also a frequent commentator on the topic of artificial intelligence, hence his most recent book and the subject of this podcast. The book, is “Deep Thinking”.

Since the 1940s, computer scientists have wondered if artificial intelligence would be achieved if a computer could beat the best chess player in the world.

Kasparov has gone to great depths to studying what “artificial intelligence” actually means. The answer is that as computers get faster, they get better at calculating and mimicking much of human behavior. But this is not the same as intelligence or consciousness. We still have a long way before that happens.

I can tell you, having built chess programs and having seen the inner workings of what became “Deep Blue” the computer that beat Garry, nothing close to artificial intelligence was achieved.

In fact, intelligence was stripped out of the software so that the hardware could go as fast as possible. It was speed and simplicity that created the best chess computer. Not any insight into how the biology of the brain can be replicated by a computer.

Having now read all the academic papers on the topic, I am a lot more impressed by the techniques used the computer software built by Google to beat the best Go player in the world (Go is an Asian game that has been much more difficult for computers to conquer). But even then I see it using simply a combination of speech recognition techniques, chess program techniques and a technique called Monte Carlo analysis often used by software the models the stock markets.

In any case, what does it matter?

Do we say Ursain Bolt is not a peak performer simply because a car can beat him in a race?

I’m not sure he wanted to play me in chess at the end of the podcast. But I asked and he said “yes”.

I got to play Garry Kasparov!

Listen to the episode here.