Do Something You Love, to Build a Life Worth Loving. 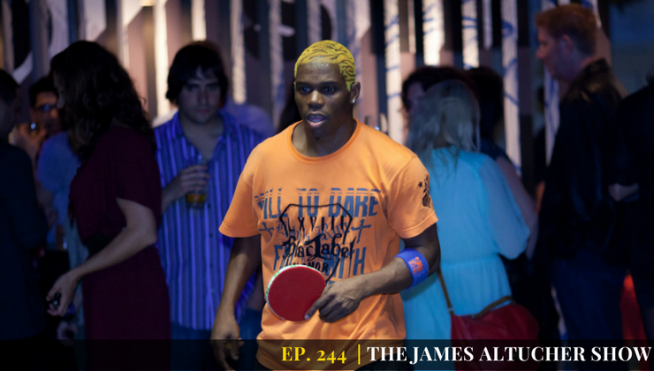 He then walked back to his side of the ping pong table. He took out his iPhone. Using his iPhone as the racket, he served the ball.

“Ok,” he said, “everything you are doing is wrong.”

The way I held the racket was wrong.

The way I stood with my legs was wrong.

The way I hit the ball and then the way I followed through after the hit was all wrong.

The angle of my wrist was wrong as I waited for the ball to come to my side was wrong.

The way I held the racket at a slight angle to the table was wrong.

My backhand was all wrong.

The way I had grown up and lived my life was mostly wrong.

He kept streaming shots at me non-stop.

He came over to my side of the table. He was looking down. I was afraid he was thinking, “why am I doing this?”

He stood behind me and grabbed my arm and moved it up as if I were hitting the ball.

I wanted to be friends.

I thought I was good.

Now, after taking lessons for several months, I realized that 100% of what I had been doing for 40 years was wrong. Everything.

I was good enough to beat people who grew up with a ping pong table. But I was really bad.

“When I went to North Korea,” Wally told me and then he started laughing, “those players were scary good.”

Wally started playing ping pong. Someone saw his skill, and, as these things go, sent him away.

In order to come back, you have to go away.

He went to Germany to study ping pong with pros. Pretty soon he was the best.

Wally has seen me play chess.

We were having a three-hour lesson that day. It ended with me doing a backhand-backhand-forehand-forehand, then forehand at the other end of the table – then random.

Then start over. He shot 100 balls at me one after the other.

“Again! Again! Good! No! No! No! Close the racket! You’re crossing over when you follow through. Just go up!”

Ugh. I had too many bad habits. I kept doing them. How do I stop the bad habits? 40 years of bad habits are hard to get rid of.

It’s like being afraid to say “no” after 40 years of telling everyone “yes”.

We took a break.

“Why did you go to North Korea?”

“I like to do things that are BIG. Every year I want to make sure I do something really big. Really special.

“I saw the North Koreans were listing a tournament so I applied and I got in! I was the only non-Asian there.

“Once I got there they took my phone. I had no way of getting in touch with the outside world for ten days. Couldn’t call my wife. If something happened there was no proof I was even there.

“So I just played ping pong. And they were GOOD!”

“Not only were the better than me,” he said, “but the entire crowd was cheering for them and booing constantly at me.

“So I decided, forget this. Let’s have fun with this. Let’s make crazy shots. Let’s jump up and down after every point. Let’s get the crowd laughing and jumping with me. I focused on the crowd.

“At first they were surprised. And then they started laughing with me. They were cheering me. I was losing but it didn’t matter. We were all having fun.

“Even the other North Korean players, they didn’t know what to do. They were afraid to talk to me but by the end they were hugging me.

“That was my big thing that year.”

“What about this year?” I asked

Wally made a movie.

“The Tables” about the ping pong tables at Bryant Park.

“No matter what is going on in your life,” Wally told me, “You could be homeless, an office worker, a ping pong champ, it doesn’t matter…everyone has a home at the tables in Bryant Park. It’s home there.”

I watched the documentary. It’s good. “It’s winning awards everywhere,” Wally said, “I have to go to LA this weekend because it’s winning at a festival there.”

One year Wally and some friends threw a weekly party, “Naked Ping Pong”. They invited everyone they knew to a friend’s apartment in Tribeca that was big enough to fit a ping pong table and the few people they thought would show up.

So they pitched the idea of a ping pong club to Susan Sarandon and other investors. And the club, “Spin” was born. That’s where Wally has been giving me the lessons. Now Spin has locations all over the country.

After one three-hour lesson I was exhausted. I didn’t think ping pong could be so tiring. We went upstairs.

“I’m going to Israel next week because one of my students is in a big tournament there.”

But if you take one chance a year, something unexpected, something you love, you build a life worth loving.

So many times I’ve spent years just struggling for money, thinking it will buy happiness. What a waste!

We scheduled our next lesson. Then Wally showed me his unicycle Segway. I think it’s called a Ninebot.

“I have to head off to the tables,” he told me. “I always like to play there every day.”

He stood on the Ninebot and he started weaving in and out of the crowd as he cruised down the sidewalk on his robotic unicycle. Then he was gone.

I was exhausted, I went down into the subway to practice doing standup comedy again with an unfriendly crowd.

I want to do my special thing each year. I want my life to compound into wonder.

I went into the subway. I opened my mouth and started…