Becoming The Master Of Your Own Fate 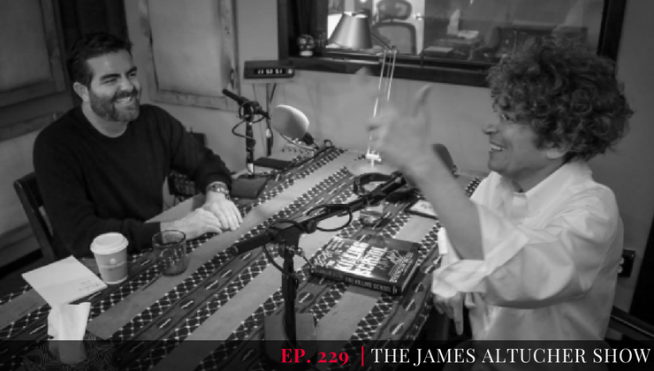 His platoon was counting on him. He couldn’t come back a failure.

Brandon Webb was deployed to the Middle East four times. He was a SEAL and then he became a special operations sniper. “We were new guys. New guys didn’t get that opportunity,” he said. “We were excited but terrified…”

He had to learn how to make quick decisions.

“You have to earn your SEAL pin every day,” he said. “The only easy day was yesterday. That’s our motto.”

He used that motto to become one of the most accomplished teachers in the military’s sniper school. And in his leadership, he changed the system. Brandon focussed on positive reinforcement (instead of scare tactics). He saw this firsthand: a good “mental mindset” leads to success.

So I had Brandon on the podcast to learn how to become an expert at “mental management.” These guys go through brutal training. I wouldn’t survive the first hour. But somehow, they make it through. I needed know how.

He talks about this in his “New York Times” bestselling memoir, “The Red Circle” and his newest book, a “The Killing School: Inside the World’s Deadliest Sniper Program.” Brandon shows you exactly how to become a master of your own fate… (what skills and tricks he teaches snipers and practices himself: visualization, positive self-talk, solution-based thinking and so on.)

“I wanted to give people the uncomfortable look behind the curtain on what it’s really like to take another person’s life,” he said.

“…what war is like and what it’s like when my friend, Alex, in the book, shoots a bad guy in Afghanistan and watches as the man’s 13-year-old son walks out to save his dad…”

“And then Alex comes back home. He has his own son who is 13. He broke down after the mission.”

I asked Brandon about the ups and downs of going to war, coming home, and going back again. And how he stayed healthy enough to start his own business, fail and start over again.

I wanted to know how he became a master of his own fate. And how I can be too…

I don’t normally do this. But this time, I’m giving away the “table of contents” of what I wanted to discuss:

“Obviously, I don’t want to learn how to be a sniper,” I said, “but what I really want to talk about is peak performance.” Both of Brandon’s books talk about this. Especially his section on “mental management.” I wanted to learn what tools and habits I need to do today to make myself a master of my own fate. That’s essentially what this show is about… becoming the master of your own fate. “Choosing yourself.”

Here’s what I learned from Brandon (and some shortcuts from the show):

It wasn’t just target practice. Brandon was training snipers. He needed his students to perform at peak performance in incredibly high stakes situations. So they started with self-talk.

It starts by changing “can’t” to “can.” But you’ve heard this before. (I did). And I tried it before.

But if it works for A-class snipers it should work for me.

Every day, he starts with visualizing success. Then he puts in the work.

Roadblocks always come up. It will be difficult. But Brandon said that’s where the “solution-mind” comes in. You have to combat every issue with new ideas. Exercise your idea muscle. Be creative.

“Do it over and over again to create a habit,” he said.

“I’ve seen it,” Brandon says, “I’ve seen it while on the firing line. They think about it and then it transfers to behavior.” If someone says don’t flinch, they’re going to flinch.

Brandon made it up the ranks. His job was to train snipers. And he started by programming students with good habits. Instead of focusing on the negative (don’t flinch), he focused on the positive (keep your eyes on the target.)

Brandon left the Navy. And started his own company.

But he didn’t know when to let go.

Nothing was working out. He lost everything: his business, friends, family… A month later his wife was asking for a divorce. And the kids went with her. “I had to have the conversation with all his neighbors: ‘Where’d your family go?’ It was embarrassing.” He said it was the first time he felt like he really failed in life. I asked how he bounced back.

He told me this: “Failure is necessary to be successful in life. There’s a big difference between quitting and failure.”

We were talking about gold medalists.They have a different mindset. Brandon calls it “the mind of a champion.” That’s what he tries to build in his students. Brandon says the formula is hard work and confidence.

“But how do you get the confidence part?” I said.

“It comes from hard work…”

I needed to know. Islam itself. What is the fight? Is this really a fight of religions? Why has radicalism spread so quickly in the Middle East?

Brandon explained the economics. There’s a big gap between rich and poor. “The social and political situation is not very good,” he said. “Saudi Arabia, for example, has a very elite royal ruling class but the working population is very poor.”

He said people join the fight because they need a cause. They need to belong to something. A military is a tribe.

I get this question all the time. “How do I find my purpose?” Some people find their purpose in a fight. In a mission. In a cause… Brandon explained that the people who join these radical groups, or any group, were probably suffering in life. And they wanted to fill a hole. They wanted what any human wants: a feeling of belonging. That’s the powerful force pulling them in.

When Brandon was 16, his dad threw him off a boat in Tahiti. And Brandon had to find his way back. Eventually, he joined the military, became a Navy SEAL and then became a special ops sniper. There were 23 of them and 220 tried out.

The question he gets most often is one of ignorance, “How many people did you kill?” But that’s not what it’s about for Brandon. And maybe that’s what separates good from evil. He continued to tell me how radical governments incentives people to join “the cause.” He said they pay people to become martyrs.

I couldn’t believe it.

“Yeah,” he said, “As a state sponsor of terror, Iran is funding and fueling the conflict in the Middle East, especially with Israel.” And the internet makes it worse, too. Because it connects us.

“The internet is a beautiful thing,” he said. But it also gives terrorists the ability to radicalize someone over here.

I don’t know what the big takeaway here is. Maybe the sense of learning new information is enough… I don’t read the newspaper on a daily basis. I view the news as the first draft of history. But I feel books like Brandon’s become the second and third drafts. And that’s where I get my knowledge.

Maybe this podcast is the fourth draft.