Removing the Mask of Masculinity With Lewis Howes 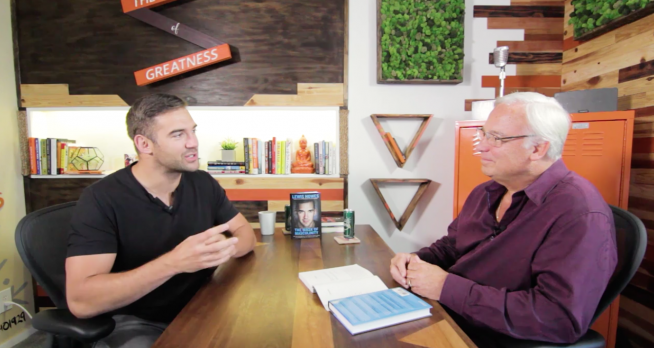 Recently, I had the privilege of interviewing Lewis Howes about his new book, The Mask of Masculinity: How Men Can Embrace Vulnerability, Create Strong Relationship, and Live Their Fullest Lives.

For men in the modern era, this book is chock full of wisdom about how to improve your life and shed misconceptions that may be holding you back. My time reading Lewis’ book was incredibly eye-opening and informative, and I wanted to take the time to highlight some of my main takeaways from The Mask of Masculinity by talking with Lewis.

Watch my interview now below!

How The Mask of Masculinity Can Help Men and Women Alike

For hundreds of years, society has conditioned men about how they should act and behave. Some of these conditions are good, such as bravery, respect, and honor.

Some, however, can be a detriment, such as the idea that men should show no emotion, should be able to handle everything on their own, and should treat aggression as an admirable trait.

For men, the first step in keeping these misguided ideals from holding them back is to recognize them. Likewise, for women, it’s important to recognize when the men in their lives are being influenced by these ideals so that they can act accordingly and help them move past them.

This is where The Mask of Masculinity offers real value. It shines a light on the various masks that men sometimes wear, why they are often detrimental, and how they can put them aside in order to enjoy a healthier, more fulfilling life.

Why do Men Wear Masks?

Over the years, society has created an image of how “real men” should act and behave.

These ideals of a “real man” come at us from every angle.

They’re in the movies we watch, the books we read, the stories in our history texts, and the pressures from our peers. However, not every man truly exhibit these ideals. Left to be themselves, they may prefer to behave in ways entirely different from how society has conditioned them to behave. The pressure to behave as expected, though, is intense, and for many men, the solution is to wear masks.

They spend years trying to convince others and themselves that they embody all of the ideals a man is supposed to embody, and in the process, they often lose sight of who they really are.

There are a number of masks men sometimes wear in order to convey the idea that they really are what society expects them to be.

In some situations, these masks can prove useful, particularly in a society that dictates this is how men should behave. This occasional usefulness is perhaps the reason why these masks have stuck around for so long even though we have now largely moved into a world where they are no longer necessary.

In many other instances, though, these masks can shackle men to an image that doesn’t truly represent them, leading to disappointment, failure, and overall unhappiness.

Why it’s Time to Take the Masks Off

Society convinces many men must behave a certain way lest they become unsuccessful and ostracized. This idea, however, is a lie and a dangerous one at that.

However, it’s also okay for men to be open, tender, and vulnerable. In fact, the men who are able to exhibit these latter traits when these traits are truly what they are feeling on the inside are the ones who are the most successful in their relationships, their career, and their life as a whole.

As a society, it’s time we take off the mask and allow ourselves and other men to dictate for themselves how they should behave. Traits such as humor, athleticism, and intellect should be encouraged when they are genuine. So should traits such as vulnerability and openness. When these traits are genuine, they are incredibly valuable. When they are a mask, though, they are rarely of any value and only hold us back.

I’m honored to have been able to speak with Lewis and to read his book, and I hope that men and women alike will take the time to better understand the pitfalls of wearing these masks and learn how to move past them into a life that is more fulfilling and rewarding.

If you would like to learn more, I cannot recommend enough taking time to order and read The Mask of Masculinity for yourself.

Lewis is a New York Times Bestselling author of the hit book, The School of Greatness. He is a lifestyle entrepreneur, high-performance business coach and keynote speaker. A former professional football player and two-sport All-American, he is a current USA Men’s National Handball Team athlete. He hosts a top 100 podcast in the world, The School of Greatness, which has over 40 million downloads since it launched in 2013. He was recognized by The White House and President Obama as one of the top 100 entrepreneurs in the country under 30.