How Hulu Made Me Realize That Motherhood Isn’t Enough 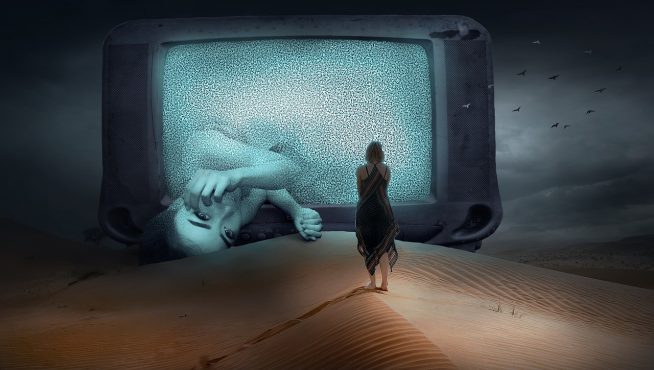 My name is Jessie and I love my kids. I mean I LOVE my kids. I live, breathe and embody “mom” and all it entails. To say my daughters are my everything sounds banal. But it is the truth. I take pride in their every little move and milestone. I revel in their humor and individuality. I feed and clothe them. I wipe and change them. I play with and teach them. I kiss their boo-boo’s. I shuffle them to activities and explore the world with them. They’re my two tiny companions who make everything fun and worthwhile.

So, how could being their momma not be enough?

The other night my husband and I were watching a new show we’ve become obsessed with. It’s called Future Man (on Hulu) and it’s really fun, especially for 80s brats like us. One of the key characters—Wolf—really floored us. He was freaking awesome. Hilarious. Like pee-your-pants funny. And kind of familiar.

We blew through this show in a couple of days. Ya know, how we parents do—throw the littles in bed and then binge-watch. After we finished the season, we did the usual: read everything we could find about the show and its main actors (cause we’re dorks like that). I was reading about Derek Wilson, aka Wolf, browsing through his credits, when a Holy Shit moment hit me.

See, way back in another life, I was an aspiring actress and host. I never really believed in myself, especially as an actress. I did a stint as a reporter and I knew how to talk to people, so for a while, I truly felt that being some sort of talk show host was my calling. But that’s a pretty narrow raison d’etre, so I threw acting into the mix—and really anything that would get me in front of the camera, as long as I was clothed (well, mostly clothed, thanks to a sleazy pilot produced by James Gandolfini and his buddies—but that’s a whole other story).

So there I was, scrolling through Derek Wilson’s IMDb page, when I happened upon this credit: In the Now (TV Series 2008). He had been in 4 episodes…And I had been in 5 (credited as Jessie Michaels, cause I had been an idiot who didn’t like much about myself, including my name—born Asya Bronfman, changed to Jessie Bronfman after immigrating to the U.S. Then Jessie Michaels, God knows why. I’m Mrs. Jessie Kanzer now—hopefully that’s my last stop).

I couldn’t really remember Derek. I went back and watched a few episodes of In the Now. There’s not much to say about it. It was a forgettable web series. But there he was—not quite as polished and buff as he appears today. And there was I. Nothing extraordinary. Yet, there I had been, nonetheless. Equipped with my dreams just like Derek Wilson had been equipped with his. And something about this fact kept me up at night.

I married a wonderful man. I gave birth to two scrumptious daughters. I’m an active member of my community (whatever that means). But, somewhere along the line, my dreams went out the window.

Now, was I a particularly gifted actress? No. And Derek Wilson is definitely a super talented actor. So it’s not fair to say I would’ve made it if I had stuck with it. But something about that Holy Shit moment won’t dissipate.

I am a really good mom. I’m pretty sure I was born to be a mom. But I’m also pretty sure that being “just a mom” is selling myself short. I don’t know exactly what else I’m supposed to do in this world. I don’t know how I’m going to figure it out. But I want to try.

Have you ever had a Holy Shit moment that made you question some life choices? Please share in the comments below!

Jessie Kanzer is a stay-at-home mom of two little girls (and a cat) in Dobbs Ferry, NY. Since the birth of her first daughter three years ago, she has fallen in love with motherhood—but is also trying to carve out room for her other talents and passions. You can find her on Facebook and Instagram, where like most moms she posts too many pictures of her kids.