Lunches with the Homeless

From Our Community | Giving, Inspiring 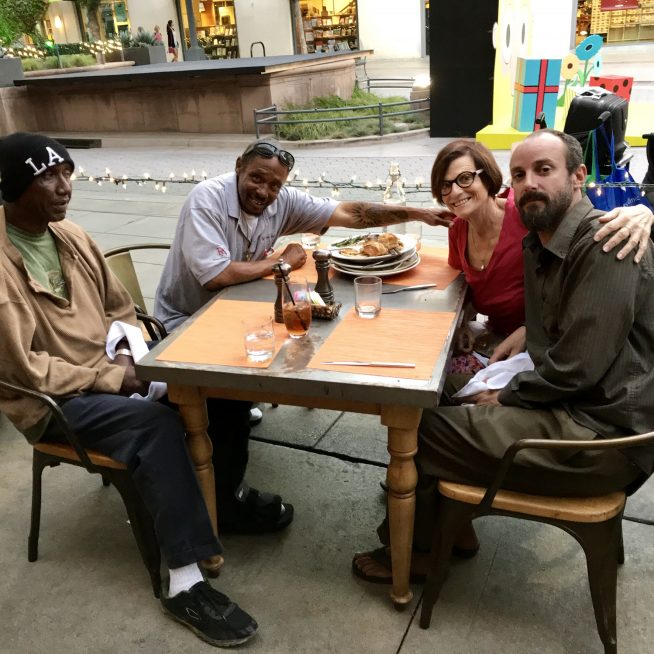 By Jan Shepherd, as told to Elaine Lipworth

Three months ago, I was walking along Third Street Promenade in Santa Monica, shopping for a gift, when a grey-haired man wearing jeans and a jacket approached me. He looked friendly, had a twinkle in the eye, and was holding a sign that read: ‘Need Food For Myself And My Family.’

“God Bless you too,” I replied and stopped for a chat — something I might not have done in the past — engaging in a conversation with a man who was clearly homeless. But I felt compelled to talk to him. The man introduced himself as Jeff, who I later discovered was an intelligent and engaging 59 year-old grandfather living on the streets and desperately trying to provide for his wife and granddaughter. It emerged that Jeff had been through huge challenges during the course of a tumultuous life, including, he told me, the recent death of one of his grandchildren.

I gave him 20 dollars to buy dinner for his family and went on my way.

A few days later, I found myself wandering along Third Street again. There was Jeff standing on ‘his’ corner near Starbucks, holding up the same sign. I stopped to greet him and spontaneously invited him to join me for lunch. Jeff accepted and we made our way to a nearby restaurant – where we settled down over chicken Caesar salads. Jeff proceeded to tell me how he had ended up homeless. At age 24, he said, he had witnessed his mother’s boyfriend brutally beating her. Attempting to defend his mother, Jeff said he had impulsively grabbed a lamp, hit the man on the head and inadvertently killed him. The upshot: he was convicted of murder and spent 30 years in prison.

Jeff went onto tell me that just prior to his release from prison, his daughter and son-in-law were killed in a car accident. The tragic loss, he said, had sent him over the edge emotionally — and physically. Unable to support himself and manage a ‘normal’ life, he started living with his wife and granddaughter in a tent on the beach. Jeff also revealed that he still suffers severe mental trauma, the result of his long incarceration (which involved abuse from fellow prisoners). In prison he became a deeply religious Christian. Faith, in fact, had helped him to survive those years behind bars. And the death of his daughter had tested that faith.

As lunch progressed and Jeff related his story, something interesting happened. I didn’t see a homeless man or a former criminal sitting opposite me; instead, I simply saw a loving soul opening up (perhaps for the first time ever) to someone who was prepared to listen and show him compassion.

Tears were pouring down Jeff’s face, because, he said, he hadn’t been able to forgive himself for taking a human life. What followed, over that memorable meal, was a moving discussion about how it was time for Jeff to finally release the pain that had dominated his life, and set himself free.

Since that lunch, I’ve got to know Jeff a little more. He certainly has mental health problems and to be honest, I don’t know how much of what he’s told me is strictly the ‘truth’, nor do I know the extent of his psychological wounds. Frankly, none of that matters to me at all, because I do know this: he has a big heart. I have seen him lift the spirits of other homeless people in the Santa Monica community by his sheer presence. He is an optimist with a good heart. And, by the way, Jeff is also a spontaneous poet, frequently reciting his verses to people passing by!

I realized that people like Jeff, who are leading lives that are difficult by any standards, are members of a visible yet largely discounted community, ignored by almost everyone. I knew at the end of that initial afternoon with Jeff, that even as an army of one, I could make a difference, so I decided to take homeless people out to lunch on a regular basis.

Since then, there have been numerous Caesar Salads, pasta dishes and plates of sushi at great restaurants all over Santa Monica. It was important for me to take my guests to lovely places to eat, rather than just giving people on the street a few dollars to go to MacDonald’s. I wanted to treat homeless people with dignity and respect, which meant sharing healthy, delicious meals with them – reflecting to them that they are deserving individuals who matter.

The stories I have heard during these meals have been heartbreaking and inspirational in equal measure. I met Debbie, an East coast transplant in her 40s, who spends her time preaching about Jesus, using the streets as her personal pulpit for anyone who’ll listen. I got to know Tim, who worked for 20 years in the shipyards, before losing his home when his girlfriend became addicted to crack. They had a son together, who was born addicted to the drug. Distraught and guilty, Tim told me he had a nervous breakdown; his life spiraled downwards. His adult daughter, living in another state, gained custody of his son while Tim became homeless. Tim has now left his life on the streets behind him. Reunited with his daughter, he is helping to raise his son.

I met Robert, a 60 year-old with a drinking problem who worked for 40 years as a machinist, and is now disabled, with heart and lung disease. I also met Barry, who couldn’t believe that he was even allowed into the Mexican restaurant where I took him for lunch! I assured him that the only difference between us was that I had the cash – which I actually gave to Barry so that he could pay the bill himself.

Chris is a schizophrenic, also perhaps in his 60s. (It’s often hard to gauge the age of homeless people because they look so worn and have been through so much as a result of living rough). When I took Chris to lunch it was particularly moving because he told me it was the first time anyone had taken the time to sit with him over a meal. He said he knew he was dealing with inner demons and the fact that I was treating him with love was a clear indication that there are angels as well demons in the world. His words really moved me.

I have been particularly touched by Nick, a schizophrenic with a brilliant mind and a kind, loving heart. Nick’s father, a doctor, died when he was eight. Nick’s mother was also a schizophrenic. Aged 18, Nick was diagnosed with the condition. Now 40, he is teaching me so much about schizophrenia –and about resilience. We have lunch twice a week and I am shocked by how difficult it is to find sustainable help for people like him.

A highlight was my 2017 Thanksgiving. I took three homeless friends — Robert, Tim, and Nick — to an upscale restaurant for dinner where we enjoyed turkey with all the trimmings. Perhaps the best part of the occasion came at the end of the meal as we left the restaurant, when our friendly waiter came running after us and thanked us for making his own Thanksgiving so special.

As my Lunches With the Homeless continue, it strikes me that my adventure had already begun weeks before that initial serendipitous meeting with Jeff. I had actually been spending time reflecting on the spiritual nature of connection between people, how everyone deserves to be seen and heard. Isolation and loneliness, in my view, are among the biggest problems we face in our society. And they are exacerbated by the extent to which technology is replacing direct human interaction. I have always had a firm belief that everyone is important; we all need personal connection with others. That belief, along with the sage words from my own mentor, John-Roger [the distinguished spiritual teacher and best-selling author who died in October 2014], who talked about the need ‘to give your love away or it will die’ was at the root of my decision to instigate the lunches.

Inevitably, friends and family members have expressed some concerns. ‘I don’t know how you do it,’ people have said to me with a mixture of fear, awe and worry! I do appreciate their concerns; it is true, of course, that many of the homeless people in Santa Monica have mental health problems. And while those difficulties affect their ability to take care of themselves, they don’t affect their humanity. Also, research shows that the overwhelming majority of homeless people are only harmful to themselves. I’ve explained to my kids and grandchildren that I don’t feel scared or threatened and I have learned to trust my intuition. There is also the fact that all the lunches take place in restaurants — public places. So I am never in any danger.

Again and again, my lunch guests remark on how grateful they are to spend time with me. Really though, it’s me who is receiving the greatest gifts. Getting to know individuals in the homeless community has provided me with an amazing opportunity to build self-trust, greater compassion and gratitude. Yes, it’s true that I’ve had to sacrifice a few facials and other indulgences in order to finance the meals, but there are no regrets. On the contrary, the lunches are a joy! (Incidentally, friends have told me that since my journey began, I’ve been looking radiant.) All I know is that inside, where it counts, I feel vibrant, joyful and remarkably blessed.

As told to writer and journalist Elaine Lipworth: elainelipworth.com, find her on Twitter as @ELipworth.

Jan Shepherd studied Spiritual Psychology at the University Of Santa Monica and worked as a transformational coach for two decades. A mother of two, and a minister in The Movement Of Spiritual Inner Awareness (MSIA), Jan has three grandchildren and lives in Los Angeles. For more information please contact Jan at Janshep@aol.com.

US based, award winning writer/journalist Elaine Lipworth reports on film, music and lifestyle . Born and raised in the UK , she conducts cover interviews for leading newspapers and magazines  including The Guardian, You Magazine (The Mail On Sunday), The Daily Telegraph, Psychologies, Stylist, Marie Claire, Harpers Bazaar, Square Mile and The Four Seasons Hotel Magazine — as well as many other global publications. She has a podcast, ‘The Good Life’ (interviews with inspiring filmmakers, actors and musicians)  and is a regular  contributor  to Thrive Global.  Formerly a television reporter and presenter for  the BBC , Elaine  has also produced documentaries in the UK and the US. She is interested in spiritual psychology and lives with her family in LA.